Lol, this is awesome. Another cash title ---

I can't figure out how to make the notes section at the bottom right like on sweet tooth. If someone can do that, that would be groovy Guardian of Elona 20:32, 6 February 2008 (UTC)

Froggie said to save your party items for now as there is more to the party animal title than has currently been disclosed! Whether this implies that double points or bonus points are awarded during certain times or events or during certain activities or in specific locations or a party animal weekend is planned is not yet known. There is some speculation that being drunk and using party favors while dancing naked during festival days near the festival boss during firework displays on certain blue Sunday's Provide Quadruple bonus points to both Drunk and Party Animal has also not yet been tested. Yes I know that life isn't fair, But I would like my Fantasy worlds to at least CONSIDER the Idea! 15:42, 9 February 2008 (UTC)~Rud

How does this work with Infinite Beetlejuice Tonic?

Not cheating? They could get a infinite number of points to this title by simply clicking a button over and over.--Alari 21:36, 6 February 2008 (UTC)

Furthermore, entire guilds could all get the max title if they got one and passed it around. Definitely cheating.

Although infinite, if its like normal tonics, you got to change districts or go "outside" to take off effects. Do you really want to run in and out of outpost 10,000 times? - Kerpall 18:58, 6 February 2008

Everlastings don't and never have given points toward party animal. That's that.

After years and years of testing?

Good enough for me.

I used all my stuff a few weeks ago in a guildies bithday party, shame it aint backwards compatible--Clouddyl 22:03, 6 February 2008 (UTC)

Indeed, as a self-confessed "pack rat", I too still have stacks of these items from festivals-past, yay me! :D Hmmm, since this is the Chinese Year of the Rat, I wonder if there's something in that? As this title does benefit us pack-rats / item horders? ;) --Wolfie

Most likely will be similar to the Sweet Tooth title, gives boost to Favor of the Gods when maxed (this is currently untested), adds to your KoaBD (maxed titles) title, but otherwise just there for showing off. --Wolfie

What does any other title do for you? Hero title is good for nothing more then childish bragging, Drunkard, what exactly is drunkard good for, sweet tooth, ect. Just the fact that its a two rank title that can be bought is enough of a purpose.--Alari 06:52, 9 February 2008 (UTC)

I maxed this title in Kamadan, but i never saw the message that i maxed the title. Perhaps favor support not added yet?

It probably doesn't add to the favor, like many titles, which would be a nice thing to add to the article, can anyone else verify this? -Meridan 20:20, 14 February 2008 (UTC)

Oh wow, I just checked and I never knew almost all titles worked towards the favor, guess they oversaw it, perhaps it'll be implemented in a future build -Meridan 16:13, 15 February 2008 (UTC) 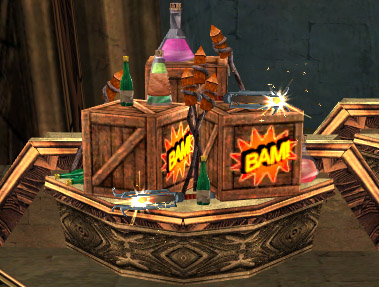 Not my character (I wish!) - but here is proof:

Maybe you should check the TITLES article next time - its account based only RTSFirebat 06:01, 8 February 2008 (UTC)

Addendum to the bug note about using items in an explorable area: I used a Sparkler to start the title track in a town (giving me 1 point), then went to do the Big Bang. After finishing the quest I still only had 1 point. Not really sure what causes the game to start recording Party Animal points in explorables at this point. 24.151.142.172 17:21, 9 February 2008 (UTC)

I can confirm that as well. For those who used items in an explorable area and did not get the title track started, please post where you were and what quests you had active at the time. The track WILL start in explorable areas, so if it's not starting for you, something more is going on... --68.187.144.197 08:38, 11 February 2008 (UTC)

Most ppl buy the 1 point items for 100g, assuming I'm using my calculator correctly (got accepted into a prestige math and science academy and still suck at math xD good thing i scored highest possible on science test thingies) it would cost them 100k to reach rank 1? Lost-Blue 19:35, 9 February 2008 (UTC)

Yup and 1mln for max rank, but remember prize will rise because event stuff is limited ;/

There's also the fact you can farm 100's of them things now. Just wait and see what happens with the prices I suppose ---

The other two similar titles cost 200g per point when you buy stuff from merchants. I expect the same will happen here.

Can you even buy any items for this title from merchants? The only reliable source for these items once the event ends looks to be Snowmen. -Ezekiel 15:58, 10 February 2008 (UTC)

I tested this with wintersday tonics, but it appears that if you try to use a tonic, them use another one right afterward. you will not get the points... can anyone else confirm? --Timeoffire45 17:39, 10 February 2008 (UTC)

I just tested it a few dozen times : if you use a tonic and want to use another one right afterward, then there are two possibilities : either you do it fast enough and you get the points, or you don't do it fast enough and you just can't use the second tonic. Anyway, you can't use more that two tonics before you need to rezone (or wait 50 minutes, if you don't want to rezone), and you need to be fast if you want to use more than one at once. 90.37.176.140 20:12, 28 February 2008 (UTC)

Gon Dra=> Me and my girl (yes a couple on the game^^) did our party animal title by using two tonics at ones and there was no problems. You just have to click four times in a row instead of two, then rezone (guild hall helps), 4 clicks again, rinse and repeat. If points aren't immediately counted toward the title, it's a small bug which is normally auto-corrected in a later connection.

I'm sure someone has checked, but there's no note on the page. Does buying fireworks from the Fireworks Master (at various Kurzick/Luxon towns) contribute to this title? SarielV 18:23, 10 February 2008 (UTC)

My guess would be no, but I'm thinking that it ought to count.

Soul of the party[edit source]

I just rv a vandal that added a third tier, but I wasn't quite sure if it was vandalism, can anyone confirm that life of the party is the max level?--

That would mean someone has already achieved r2, which would be rather quick for such a new title. While I agree this is something I think we'll be forgiven for for breaking GW:AGF, since its a very new page with probably very many views, we should keep an eye out for it. --Shadowcrest 18:52, 10 February 2008 (UTC)

Somewhere farther up on the page someone linked a picture of some Asian guy that had rank 2 already, so obviously SOME people managed to get there already --Gimmethegepgun 18:54, 10 February 2008 (UTC)

I've been asked to post proof of r2 being maxed so here u are...

. As for the no life comment, i bought multiple stacks of these months ago anticipating such a title, then took me 90 minutes of clicking on the stack to max this track. if this is what people call no life then we may have some serious difference of hopinion :D Menzies 19:04, 10 February 2008 (UTC)

why isnt this title retroactive?! 10000 party things later they make a title

No titles have been activated retoactively as far as I can remember. Pretty bad for the people who used it all because it was wasting space though :S Lord of all tyria 21:50, 10 February 2008 (UTC)

If we had the admin grind through the entire backlog of game events (not holidays, but attacks, movement, spellcasting, etc.) just to find out how many times a character had used a snowman summoner in the past, they'd probably have to shut down the game for weeks. this assumes that they keep such data for long periods of time, which is highly unlikely given that there are millions of characters to track. Were this a gamebreaking issue like duping, that would be one thing, but this is only an inconvenience to any players that held on to that stuff. SarielV 02:38, 11 February 2008 (UTC)

there was a crafter outside shing jea all festive, i managed to craft my way to r1 in a day, hoping to see the guy next time to max out, just horde the materials required til then.

when u buy the 5k fireworks, or any for that matter, does it contribute to the title?

Today (3/30/08) Gaile was on and again confirmed that everyone should "hold on to party points". I personally asked if she indeed hint at some future addition to that title and that was her response.

What's the point of clicking on the NPC? You don't have to be moving to use any of the consumables. You can double-pop tonics standing still. —Dr Ishmael

I think he believes it's because of the bug that stops you from transforming before you reach the npc you're running towards, but actually if you're fast enough you can just use 2 tonics by ramming your mouse a bit.--