Seems like they add a shitload of these guys in proph. Will make VQ a lot harder I think. Come across an army of them in the west of Nebo Terrace. Busy killing them all. Don't know If it has any use doing so. But we will see. Don't see any quests yet. --

Oke no quests here. only fond some Imps, Gargoyles and a Gargoyles Mesmer Boss. All Dead --

They don't drop any collecteble or Trofie stuff as far as I know. Hell they only drop shity weapons who aren't max. That is atleast what I had after killing 70 of them --

I hope they drop leet greens. Seeing as this mob can't be farmed. All of the peacekeepers from what i saw get new skill sets when you zone. Meaning goons can be W/Me one run and W/D another run. Pretty fun tbh :P Docta Jenkins 11:12, April 9, 2010 (UTC)

I will try getting some. --

Since I'm no good at wiki-ing, I'll add the info here: In Nebo Terrace there are 2 bosses:

Lerita the Lewd, and warrior boss 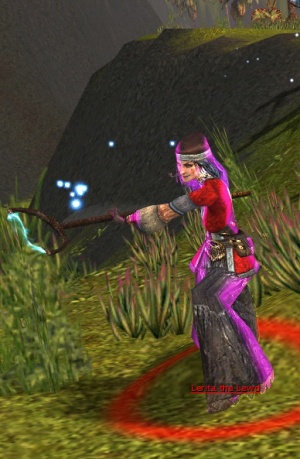 I also have a screencap of her location. Don't know of her drops (got nothing from her) and forgot to check her skills in HM (cause I was very busy dying way too often ^.^)

I'm leaning towards the fact that their builds aren't fixed, but varies constantly between many skills. We'll be having many, many builds for each and every one of them if we don't find a way to place it within an article. As we all know, there are many, many builds. And the joke from the 1st of April, might not be a joke after all. Monsters are getting their builds from PvX!!! 77.164.17.245 06:11, April 12, 2010 (UTC)

Hmmm! I think I shouldn't do anything until someone can say how we're going to do this. Giving the fact I actually can't get good proof towards the monsters skills. Seeing how they change every time, how their names are alike and other possible factors.77.164.17.245 06:22, April 12, 2010 (UTC)

Some seem to have diffrent Second Profession and have the same naem. Probably different kind of Foes trough or maybe random or just a Ghost. --

See Malfunctioning Golem for an example of how to list creatures with same name and appearance but different skill sets. —Dr Ishmael

When added a player into team who had not completed the Hell's Precipice mission (even though had completed both Factions and Nightfall campaigns), the peacekeeper mobs did not appear (nor did the Shining Blade at Dakutu Village for that matter). Team returned to the locations without that team member, and they appeared. So looks like completion of HP mission is a trigger for them. --Wolfie

However, my Rit has not completed Hells Precipice, but has completed Factions and EOTN; the bosses do appear.--Wet Wet Wetter 13:21, April 9, 2010 (UTC)

Regina confirmed with Linsey that you have to have completed either Prophecies or EotN to participate in the War in Kryta event. —Dr Ishmael

Ah ok, thanks Ish, is there a link? --Wolfie

I'm pretty sure it was in the huge Obey vs. Dismantle thread on GW2G, but I'm not gonna go page-by-page to find it, and their stupid 30-second wait between searches is annoying. —Dr Ishmael

hehe, fair enough. :) Someone might comes across it anyway. --Wolfie

I think these guys will not be permanent. And just see as a little bit more challanging then usual. Lยкץ๒๏ץ talk 14:17, April 9, 2010 (UTC)

Seems like there are quite a lot of different skillsets that those foes field, even among the same profession. So far, i had 2 different Marksmen, 2 Sybils, 3 Clairvoyants... Makes them quite interesting enemies. --Rotfl Mao 14:47, April 9, 2010 (UTC)

Feel free to add to these guidelines if you think of anything else. —Dr Ishmael

I got it, just was too busy with work at the time, then I forgot about it. —Dr Ishmael

Saw a mob having a Drake .. named plain .. Drake

Yeah the Huntsman seem to have them as pets. --

Boss I guess? Pages are not all yet all made. You can help out by making one :P --

He doesn't have a page. Has no one found him yet? He's located just north of Bergen Hot Springs. He gets attacked by White Mantle and Peace Keepers.--

I know Greves the Overbearing, I made the page 3 days ago --

Lol... Did you just answered your own question :P? strange... And, I think any monster that drops loot has the ability t odrop a perfect weapon -.-' Like a nub Bone Staff, or even worse, a Cane...--

It was mostly about the max damage. But yeah, iirc, anything can drop golds with perfect mods (except in pre-searing). Not everything drops max damage stuff though. Now we know that the bosses do.
I just hope they add some interesting drops to make killing them worthwhile.--

How Do We Make Them Go Away![edit source]

<rant>These guys are getting really annoying overall, has anyone found a way to prevent them from spawning in a given area? It's really starting to bother me that I can no longer farm dust in any significant quantity. The peacekeepers really should be optional as in with a quest.</rant>Neoezekiel 16:17, May 3, 2010 (UTC)

This is a permanent change for those who completed the storyline. Go farm in Shing Jea, I guess. RoseOfKali

Dust? CoF runs give plenty of dust. You should get one for every three bones or something like that, if I remember correctly.