Would it be possible for someone to mark on the map where the bosses appear? Or are they random?

The spawn positions are fixed, it's just which boss spawns where is random. Check this link at Soul of Melandru for a good map. --Karlos 22:11, 20 October 2005 (EST)

Is it just me or do the profession icons make the text smaller and grittier? (Can't really find a better word for it, sorry.) --Armond Warblade

The elite skills lists. The pics are 15 pix large, and they're kinda small and for me make the text look small too. --Armond Warblade

It has to do with the problem the wiki has with scaling PNGs. For that specific reson LordBiro created and uploaded smaller sized icons for the professions. The icons on the page now should be replaced with the correct templates.

I just went out capping some Elites around here and none of the spawn locations on the West side of the isle spawned any bosses (at all) yet the Eastern spawn locations spawned two bosses each (the same one never spawned twice). Is this a usual feature of this area? If so I'm surprised I havn't noticed it before. --arual 07:58, 22 May 2007 (CDT)

There are several spawn areas, yet only a set amount are filled, leaving some areas void of bosses and sometimes some areas would have two.

Fair point, I just thought it odd more than one boss spawn at each location. Other than where they always do I've never seen it happen before --arual 11:35, 24 May 2007 (CDT)

I've been out on Perdition Rock a lot, but I have never seen this boss before. Can someone tell me what it is? Or perhaps it is new? 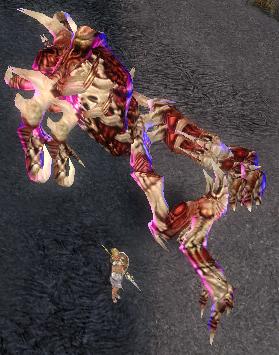 I don't remember Dwayna's Cursed, a Monk Boss, having a purple aura. Or do all Monk bosses look like that now?

I can see the purple aura, but I can also see a bit of a blue aura around the joints, though it certainly looks like a Mesmer, hence Lyssa's Cursed --Gimmethegepgun 15:32, 30 July 2007 (CDT)

Heheh, I think you're right. At the time I already had 10% Morale boost and neither dropped any items, so I thought it was one boss. I've never done something like this before and probably never will. Another SC to keep for bragging rights :)

Forgive ignorance, but didn't there used to be a huge patrol circle where lots of groups patrolled, allowing you to sit AFK for a while farming?LLandale 23:33, 15 March 2009 (UTC)

I haven't been here for awhile, but last time I checked there is still several groups that patrol in a circle path which passes right by the portal.