What are the possibilities of a perma-pre char? So far this is what I've got:

Drunkard (I'd like to see this) Legendary Defender of Ascalon Wisdom ? I know purples drop, but do golds?

also considering adding that they don't have access to 30 attribute points.

The Drunkard title is the most common character-based title in pre-searing. Only the account-based titles are more common. -- 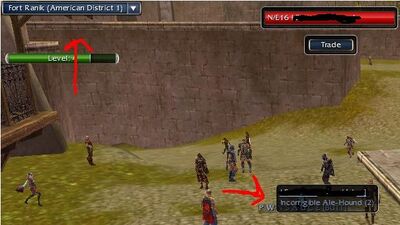 Just a little something I saw in pre one day 0_o

He is I Darkside Clone I and he has like every account code but only plays darkside. He also has another pre-sear account with I Darkside I where he also has lots of codes. He has beaten prophs, and factions too i think, and he is incubating minpets on his other chars. —

Ya Darkside gave his account to me once he got sent out of pre-searing. Im taking on getitng Ale-Hound myself now ^^ Suicidal Romance X 14 April 2008 (CST)

Just out of curiosity, what did the limit used to be before the title?

There was no level limit... I will edit the page aswell... The Character God Antipowers (in the same guild as Darkside [buds] was the first level 20 in presearing and Sync Dancers was second only by 1 day..who was also in buds.

Some people use preorder weapons to gain advantage and to speed up the leveling on their perma pre. Should we include that to give tips to aspiring perma pres?--IcyShaker 07:46, 5 March 2007 (CST)

are you able to use the command "/special" in pre-searing to ? if so probably only get an scythe and a spear what makes no use since you can't get those attribute up and therefor make the weapons pretty much useless (although that scythe hits multiple enemies at once, and the spear has fire DMG and i beleave the skill "cunjure flame" can be get in PRE searing therefor making it a little more powerfull)
So is this true ? can you use that command ? (not able to test atm)--OMEGA-ThundeR 07:59, 5 March 2007 (CST)

Conjure Flame is post searing, yes you can get both those items pre-seering though, and I'd imagine the same holds true for other items. --JP 08:22, 5 March 2007 (CST)

Dunno who removed the info about lack of expert salvage kits (which got reverted), but he's right. With the addition of char salvage kits, perma pre searing chars can salvage runes and the like --

Charr Salvage Kits? What are those? Let me check, ok? ...done. You're all right. Hate it when undocumented updates sneak up on ya ;] — Poki#3

I have also seen a couple of people running around with treasure hunter, who claim to have gotten it from the chocolate eggs

The following titles are attainable in Pre-Searing (going from easiest to hardest IMO):

Drunkard: Farming Hunter's Ales from the Hunters near Fort Ranik, as well as getting drunk from event items.
Legendary Defender Of Ascalon: Getting to level 20 in Pre-Searing (requires Deathleveling atm).
Sweettooth: Gobbling up the sweet drops that drop with events. Event items also drop in Pre-Searing, several characters maxed this title already.
Party Animal: Using the Party items that drop with events. Maxing this title seems pretty hard in Pre, figuring only Halloween gives a remote chance of getting Party Items. However, the Farewell Gaile event made this title a bit more attainable, even though AFAIK this was a one-time event only.
Treasure Hunter: Farming Golden Eggs with the Easter event gains you points. I consider maxing this title far-fetched, since atm only Golden Egg drops (and only during the Easter event) can contribute to this title.

It is NOT possible to get Survivor in Pre-Searing. As-is now, one can't officially gain the required amount of exp in Pre-Searing without deathleveling something, and thus dying in the process. The only way to get both Legendary Defender Of Ascalon and Survivor in Pre-Searing is by using reusable resurrection skills which requires the use of exploit items (i.e. skill tomes that were smuggled into Pre-searing using the Guild Hall glitch).

You can find more information (proof) on titles (and title-holders) in Pre-Searing via the Presearing.com Titleholder Gallery Bouvrie 19:46, 8 July 2008 (UTC)