Does anyone have a good strategy I've tried different combos but none work, ideas please? thanks --Lowcatalina 16:28, 5 September 2007 (CDT)

I used Skale, Fire & then Kappa (in that order), best method is to use; 1. Your most powerful damage spell (As it won't be interrupted or protected). 2. Wait for their most powerful damage spell & BLOCK it (Don't try and interrupt they will have it protected) 3. Spam micro damage until your skills recharge using interrupt to kill ANY attack (big one if you can, but otherwise every little helps!.Rinse & repeat. (NOTE: They often try and "spike you" with two high damage skills one after the other (if they have them), ALWAYS BLOCK the first one & interrupt the second, as they ALWAYS protect the first high damage skill be ready to block it when you see them using the Protection skill. ALWAYS use the +200 <50% skill it's VITAL in a tough fight! And most importantly watch your energy!)

Best thing to do for Fire Elemental is to use Skale vs him, use Rising Bile and constantly dodge Flares and fireballs, using Polymock Block on Rodgort's, he's easiest of the 3 --

A better suggestion would be to save money, then buy all the good peices becuase, I mean who has the time to honostlykeep up with this polymock bull?

My honest opinion, is that Blarp needs to be nurfed. I have long since lost track of how many times I have tried him.. I have tried doing google searches on him. I have tried what is suggested here, and at best I can get his final guy down to the half way point, but that is it. Varuuth 02:48, 30 August 2008 (UTC)

How I Defeated Blarp[edit source]

I realize that the image below is not the Polymock Coliseum. However, once I saw I was going to beat Blarp after at least 50 or so attempts, there was no way I was NOT going to finish him. Since I couldn't get back into the Polymock Coliseum so you'll just have to accept that I used the same GW interface in the Coliseum and adapt it to your own purposes. 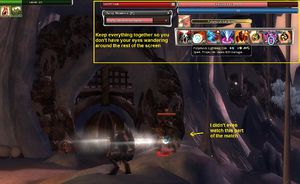 For Blarp, I used Skale then Kappa, and then Fire Imp. As noted above, I didn't even watch the figures slug it out, I just watched the skills getting activated and my own health and energy. I countered whenever I could. Sometimes I couldn't.

Finally, as shown, moving the interface away from my usual gaming configuration and into the configuration shown helped tremendously with me being able to use the Ether Signet properly for energy recharge. One of the things that would get me consistently is the fact that I'd run out of energy and I'd keep hitting the low-level damage spell and failing because I didn't have energy. I did that maybe 3 times with this setup as opposed to the usual setup (15+ times easily) zcollier 18:34, January 17, 2010 (UTC)