These things dropped a couple tings that seemed strange, first off one droped a Sparkler and a few minutes later another droped a Hunter's Ale. -Kalle Damos

every enemy does that during the event :) --

That's because of the Special GW:EN Event that will last till Sunday, it gives every monster in Gw:EN a chance to drop Sparkler, Ale and Honeycomb.--Ricky 16:17, 12 December 2007 (UTC)

Hmm. GW:S&F says not to list weapons (excluding uniques and species-only items), however I think particularly rare weapons such as Elemental Swords, Runic Blades and Icy Dragon Swords (etc) should be listed and the S&F guide changed to reflect that. I guess we'll remove it for now, but I think the S&F guide needs to be changed. --Shadowcrest 20:11, 14 December 2007 (UTC)

Actually, I thought about it. I'd keep the pages w/o the rare weapon drop. If someone was looking for an Elemental Sword they could just go to the Elemental Sword page to see what drops it. --Shadowcrest 20:15, 14 December 2007 (UTC)

IDS is a bad example actually, since they're only dropped by Ice Imps in Mineral Springs --Gimmethegepgun 00:03, 19 December 2007 (UTC)

There, It's confirmed.. All happy? The CBR

They do drop on nm, just got a req6 one.

We already know they drop it, its just its against a policy (i think) to list it.. --

I got my Shadow Form+AoE fire nuker to the cave in Riven Earth in hard mode, and every run I only get like 1 saurian bone and no golds and purples. Any explanation, or am I extremely unlucky?--Victoryisyours 23:58, 18 December 2007 (UTC)

Sure It's hard mode? The CBR
Thats because you get less drops when you kill a huge mob at once. That is why at Plain of Jarin I prefer to bring my sin with a quick spike to quickly kill insects one by one over using my VwK Rit to kill everything at once. I get more drops this way. 201.150.67.84 06:14, 11 January 2008 (UTC)

Does anyone know how much health they have in hm? 380 health

I made this build and I use it on my monk for farming Raptor Nestlings in NM and it works REALLY well. It can solo the entire cave at once except the boss. However, it can't work in HM:

does anyone have any suggestions as to how it might work in HM? the raptors attack faster and more of their attacks get through the blocking spells. They also scatter A LOT. thanks ^^ 6LYSSANREAPER6

I can confirm that dye drops are not normal from these monsters. In last 20 Runs i have gotten 2 black dyes and many MANY non rare dyes (Red, Blue,Green, Purple) The CBR

As per GW:S&F we don't list such 'common drops'. Also explained on your talk ---

I'm not giving up on this. It should at least be tested if there are unaturally high Dye drop rates here, and add it to notes or something. The CBR

I'm actually getting incredibly high dye drop rates all over the place. Training up my level 3 elementalist in Plains of Jarin, I got a black, yellow, red and silver while kiling about 100 enemies. 130 farming's got me several dyes recently too, I think the drop rate's just been altered somehow. 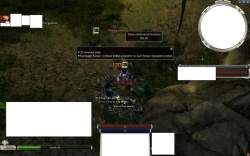 Been farming these things the whole event. They sound like *beep* chickens when you kill them. Very annoning. Arnout aka The Emperors Angel 10:42, 3 November 2008 (UTC)

You have now idea howmany of these I killed. 135 *30 = more then 4000. (and even more due to failed runs) And you get so tired of that sound. I'll take your rollerbeetles any day over these raptors. I spend a huge amount of time killing these, and I havent run in to anything I find more annoying. Arnout aka The Emperors Angel 08:00, 11 November 2008 (UTC)

D: How dare you! I love rollerbeetles! They're so cute!

can ny1 gimme an approximation of their maximum health? Renegade Shinobi 15:29, 2 December 2008 (UTC)

Well, not fully, but partially. Critical Defense much? ---

and? Blinding Surge hits adjacent foes to foes without the need of it being enchanted, so i see no need for it to be noted. in fact the entire note could be removed as melee mobs tend to bunch up in general Kurtan 21:29, 18 February 2009 (UTC)

Just tried doing my ele's usual E/Me raptor run (the one I've done maybe 7000+ times) and noticed the raptors are a lot more prone to scatter as well as seemingly taking a lot longer to kill. The sliver armor damage is the same however. Can anyone confirm they've had a health buff? Also I think Rekoff has had one too, she seems to be more difficult to kill too. Walling them doesn't work as well as it used to. --Valandil D 08:15, June 5, 2010 (UTC)

Sliver Armor got, uh... "fixed" so that it no longer deals damage to the same foe until that foe is either dead or runs away. In other words, they made it completely and utterly useless and any farming build that used it no longer works. --Macros 08:21, June 5, 2010 (UTC)

Ok granted that they've 'fixed' Sliver Armor (polite way of saying they f---ed it), I just tried a slight mod to my build and found that I can take on most of the raptors but it does take considerably longer to kill each of them. I tried taking on Rekoff as well, and found her Unsuspecting Strike hits for a lot more damage now. Used to be ~250hp off but now she nearly wiped me in one hit, so ~450hp. ~_~ ANet please stop stuffing with Sliver. It's not the sliver farmers you gotta worry about, it's them War's with MoP and the one hit attacks that almost always take out the entire mob. --Valandil D 08:33, June 5, 2010 (UTC)

Pretty sure they can deal any type of damage, the "dagger" they use could be with any mod, elemental damage included, most likely piercing or slashing though — Viruzzz 22:07, 23 April 2011 (UTC)

Don't most daggers deal slashing damage? Not sure though. --