When taking the quest Sunspears in Cantha, you can actually use every NPC to your service in the fightings. By that you can reveal the skills that they use. For example Zhou Pak - the Rare Scroll Trader has Clumsiness as one of his skill. By saying this, we should really try to map them all here. --AlpHaz 18:22, 21 February 2007 (CST)

More scrolls to the list?[edit source]

I have seen a Adventurer's Insight scroll in the trader list. It seems that they accept now all the scrolls (much like Dye Sellers accept gray dye). Most of the time the pay less than the buy value but more than the sell value of the merchant, so it is still profitable to sell them to the traders. I'd like this data to be confirmed by others before addition to the article. Mithran 21:58, 20 April 2007 (CDT) 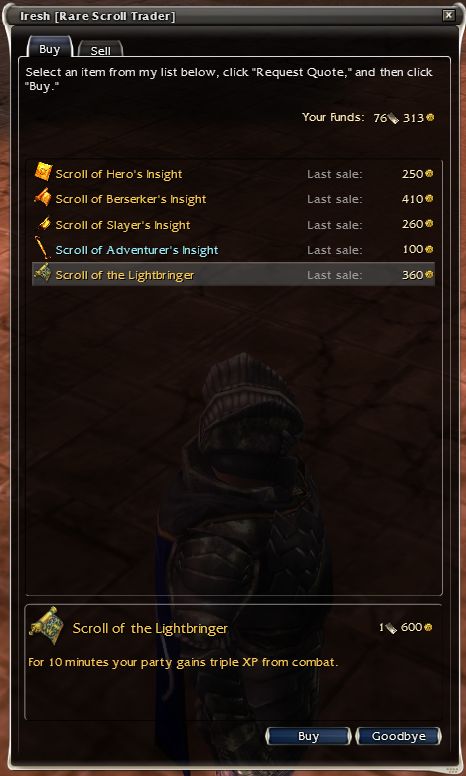 I've never seen that before. I just accidentially clicked him and saw that he offers the Scroll of the Lightbringer. But it's quite expensive. --

Dunno. To better remove DP with? -User:PanSola (talk to the

Tip: use colons for indentation :) --Ab.Er.Rant

Well, I suppose the nice thing is that Scroll of the Lightbringer will be around forever. Other methods of easy DP removal, like Candy Canes, Clovers, etc. become more and more rare every day. Sooner or later, at some point in the year, the supply becomes so low that they are no longer feasible economically. Candy Canes are perennial, so their supply takes a long downward spiral until December; clovers are probably one-time only for all we know. But Lightbringer scroll? It's available year-round, and now easier than ever thanks to the Rare Scroll Trader. Besides, for the cost compared to Candy Canes or Clovers now, this is much more thrifty, both for DP removal and also for gaining XP on a long-term outing as well.

As I haven't yet seen the scroll at the traders' assortment again. --

It's strange, but the traded will refuse to take the Passage Scrolls, although they do show up on the list of available items to sell. He'll just give you a "The trader refuses to buy the item" reply and back of. :/ — Poki#3

Too much supply and no demand? Maybe having the scroll show up was a bug. --Ab.Er.Rant

I heard at the time that passage scrolls were unable to be sold to traders to encourage inter-player trading with them. -Ezekiel 23:00, 4 December 2007 (UTC)

Traders will not buy Scroll of Hunter's Insight or Scroll of Rampager's Insight. You get a message, "The trader refuses to buy that item." It's strange, since why do they bother to buy the Scroll of Adventurer's Insight if the regular Merchant does the same thing?

What about Passage scrolls, those are gold but are they considered "rare" and will the trader accept those?--

Seems to me the Rare Scroll Traders are bugged in their pricing. For instance, a Scroll of Hero's Insight is always displayed as 100g in the trader's list, but will only be sold for 800g. The trader always offers 400g to buy it from me, which of course is better than around 50g. Nonetheless, the pricing display seems inconsistent with other types of traders (runes, dyes). 151.213.180.216 21:20, 4 December 2007 (UTC)

It shows the merchant value. ---

Every item has a minimum value that it's saleable for. Merchants buy it for that. The Trader price on scrolls has fallen so low that it's bellow the merchant price, but after you request a scroll the minimum limit kicks in. — Poki#3