At first I thought you needed a lockpick on the first level because, on my first visit, a locked chest happened to spawn next to the lit brazier. Killing the Boss on the first level, "Ancient Vaettir", causes the unlocked chest (containing the torch) to spawn. However if you don't approach the spawn location of the Boss Vaettier, then you may find yourself confused for awhile since an "alt" scan of objects in the area does not reveal anything prior to the spawn of the boss vaettir. 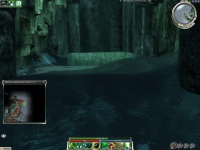 I have noticed these areas in many of the dungeons, sometimes several per level. Just walk into to a seemingly dead-end corridor, hug the wall and go into first-person view. You can see fully worked out areas of the map, but the mission map does not indicate them. I was hoping that Light of Deldrimor would reveal an entrance, but no luck. Anyone know what this is about? Was this a simple downsizing after the map has been made? --

They're Ice Dart Traps, except they target the Destroyers instead of you. —Dr Ishmael

Im having alot of trouble, lighting the flame braziers on the 2nd lvl that lower the bridge...too many cold traps , xapp gets in my way, and even with a 25% speed boost, the torch burns out before i get to them.....any one have any help they can offer?

All but one don't reach all the way across. So run to the side when they're on. If you can light one brazier, you can relight your torch at it and then light the other brazier. Urock 19:39, 26 September 2007 (CDT)

Although the blue jets do not reach all the way across, the area of their effect does. However, with a 25% speed boost, and using this to run through the trap area, not being hit by any cold traps, its still not quite possible to get to the brazier in time. A 33% boost is required.

No speed boost at all is required. If you time it right, you can get from the closest lit brazier all the way through the cold traps before they switch back on, which gives you time to make it to the bridge's closer flame brazier. I'm also assuming you're doing the lighting from the intended brazier over on the offshoot, righthand (looking back from the bridge) tunnel that there's no reason to go down except for the need to light the brazier. Sorta duh, but if you never went down that way you wouldn't see the chest which suggests what is supposed to be done and how. Again, sorta duh: If you see unlit braziers it suggests that there is a chest somewhere nearby to get a torch from, and a lit brazier within reach. ANet does some annoying things but requiring a run skill isn't one of them. --OBloodyHell 06:55, 29 January 2009 (UTC)

Is the 1500 Norn points reward for only the first time through the dungeon? I ask because I finished the dungeon again today and I only got 200. I didn't pay attention the first time (during preview weekend), and I only did it again because it wasn't in my dungeon guide *shakes fist at ANET* and to get the 1500 norn points. Jaxgreystar 15:17, 17 September 2007 (CDT)

Yes, all dungeons and primary quests in EotN are like this - 1-3K points for first time through, only 100-300 points for repeating it. —Dr Ishmael

Uh... ice. Why would it be jade? It's not even remotely green, and it's nowhere near Cantha. —Dr Ishmael

i find a hidden treasure at lvl 1 near the 2d floor passage...it give me 23 mo..is it possible?

Lv1 treasures are more trash-ure's, they give trash --

There's a problem with Hench AI on the second level. I set my party flag on the near side of the bridge, then lowered and crossed it, removed the flag when I was on the far side. Henches wouldn't cross the bridge, but try to get around somewhere (where I couldn't see them anymore). Re-flagging and meeting on the "original" side of the bridge and having them follow worked, then.

That's a standard bug that I've seen often - if you unflag your AI when you are far away from them, they will run in a seemingly random direction instead of coming to you. If you plant a new flag next to you, though, they will move to that flag. —Dr Ishmael

This is NOT an AI comment...but did not see anywhere else to put this. IN Hard Mode, the destroyers spawn in groups of 6-8 AND it seems that you have about 30 seconds to kill them all before the next group spawns. Not sure how many groups spawn since after fighting through the Necro terrors (using bile, life transfer, life siphon, etc...at one point I had I think 12-13 pips of degen..and, of course,3x bile = dead!) and then getting the first group of Destroyers; dealing with those, when I see another group spawn and head our way. I just hate dungeons...

Are there any to get this? just ran my Rit to the town and noticed i could NOT get the quest from Captain Sargen's right out side of the area. will screen if needed for proof ~~chessyang~~ 12-19-27

?? Captain Sargen? You get the needed quest from Olrun Olafdottir, who is standing just outside the caves you go into to get to the entrance itself. P.S. If you take the right-hand passage you can avoid most of the freezies by hugging the right-hand wall. --OBloodyHell 06:59, 29 January 2009 (UTC)

Note, this is not a trap, it is a dredge skill.

yea i fixed it, i hate idiots that put notes onto pages when they dont even know wtf is going on. —The preceding unsigned comment was added by 58.161.132.1 (contribs) .

SMALL CORRECTION ABOUT THE QUEST[edit source]

I did discover that yesterday as i got the quest completed although I failed to kill the Plague.

The Plague of Destruction is however necessary to get the Dungeon completed.

--------------------------------------------------
Uh, if this was ever correct, it isn't any more. I just had the dungeon reward come up (NM) the instant I kilt the "plague" and checked my log and I had the quest completed, despite there being several destroyers in the back area I had not killed. The only thing that might be possible is that the "original" destroyers need to be killed, but not ones spawned secondarily or something. Either this "correction" is incorrect or there are subtleties to it currently unidentified. So the suggestion would be, check before exiting the area or opening the end-dungeon chest. If you haven't got it, then there's something you need to kill. --OBloodyHell 07:53, 29 January 2009 (UTC)

I tried this quest on HM with a friend a few days ago. We were wiped by the plague of destruction (and thus didn't kill it) but still got the quest reward. My guess would be that the secondary spawns (including the plague) don't actually count for the quest, but the plague is necessary to trigger the end chest and dungeon reward. ¬ Wizårdbõÿ777(talk) 08:03, 29 January 2009 (UTC)

I just completed the dungeon in NM. It appeared to me that the destroyers at the end were respawning. I'd only see a couple of them (wasn't getting close enough to see the back area, but if so, that place must have been literally packed to the gills with them, as it looked like I had to take down about 3 waves of 6 to 7. As soon as I'd take out 4-5 of the group, I'd go back and there'd be a whole new pack of them. There definitely weren't any more once I killed the Plague. Curious if anyone either has noticed this or has an alternative explanation... --OBloodyHell 08:00, 29 January 2009 (UTC)

in hardmode, the destroyer boss on the second floor gets stuck if u lure him to the door. i have screens of me soloing him and laughing cause he doesnt fight back.

we were working on a norn mission in this dungeon on HM when we turned a corner and saw this giant floating face on the wall. it hovers slowly back and forth and looks kinda like a dwarf face. first time i saw it scared the crap outta me. wtf is it??? Smokehaze 05:30, 12 July 2009 (UTC)