I've been experiencing alot of disconnects after reconnects lately, anyone having the same problems?--Geon Arcan 16:51, 11 May 2007 (CDT)

I'm transferring my content to the official GuildWiki. I delete all foreign additions from here on the new Wiki. Big Blue 04:01, 8 February 2007 (CST)

Maybe giving us the chance to reconnect is supposed to be a gift or something. —

Last year they presented the introduced Observer Mode as a gift (=icon) to the community too. The next update will change the icon to the regular one. Big Blue 04:49, 7 January 2007 (CST)

While I see that the article does seem rather short for such an important subject, is there really all that much to it? I find myself at a loss to think of anything that really needs to be added, short of technical matters concerning servers or information that isn't already assumed. Hashmir 22:15, 8 January 2007 (CST)

Additional informations such as "What Error Code works with reconnect", "Messages to group for reconnecting players", "What kinds of connection losts are supported (restart, err7, etc.)", ... can be added, imho. Big Blue 05:15, 9 January 2007 (CST)

The problem I see, is that you really can't "generate" errors safe for Hard computer shutdown, or Disconnecting your Internet :/ — Poki#3

Could always just pull your cable and reconnect it. — Rapta 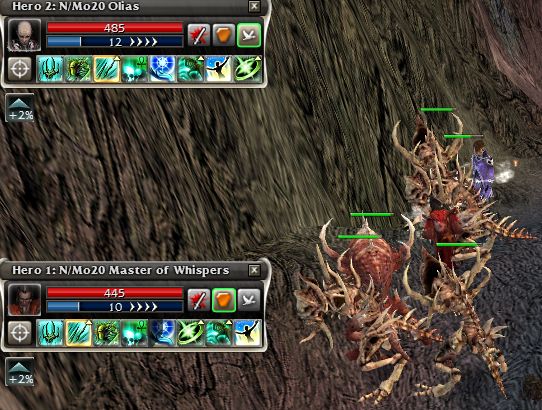 Other than the hill, I don't get what's wrong with it?--

I see something else wrong with it. The heroes are using Resurrect, I don't honestly think that could be correct. It must've switched the skills or something when you relogged --Gimmethegepgun 00:45, 2 October 2007 (UTC)

Is anybody else as angry with the having to "Friend reconnect" as I am? I don't have to reconnect often, but when I do it never ceases to amaze me how annoying it is to go for hours or more playing without realizing none of your friends or guild mates could see you online. I can recall countless times where my forgetting to reconnect has caused me to miss important missions with friends, as well as other GvG and HA opportunities simply because Guild Wars doesn't feel the need to prompt me that I'm technically not "Logged in." Who's on the same page as me with this? I think Anet needs to give us some kind of prompt that asks us if we wish to reconnect to our friends list right when we reconnect.

Nah, not new, it's existed since they added in reconnects. Basically, the friends server is different to the play server, and it doesn't get a ping when you reconnect to say you're online. Since the Guild list is also part of the Friends list server, both will say you are offline until you reconnect to the friends server, which doesn't automatically prompt you when you reconnect. It's annoying, but all my friends are in my guild, and they'll talk in guild chat (with others always checking the guild panel due to doing something boring, and they can see that I'm offline but still talking). This is only a problem to those who use their friends list extensively. --Kale Ironfist 00:53, 2 October 2007 (UTC)

today i had it two times that i DC'ed and was not able to reconnect. I didn't even got the menu with do you like to reconnect. Is it a bug of is my computer just bad? Bye bye frostmaw lvl 4 HM :(

If the only player in the party left standing is disconnected, will the Res Shrine trigger, or do the dead party members have to wait out the full 10 minutes if they don't want to rezone? I can't see from the article whether the disconnected player is actually removed from the party after 10 minutes, if it isn't, even waiting might not help. 84.128.233.162 11:59, 14 February 2008 (UTC)

The rez shrine won't trigger if the only person alive is disconnected. ♥Thoughtful♥