Is it just me or does it look like someone is being choked by a shadowy figure in the skill icon?

Very powerful skill, if a monk ever comes under a spike he can throw this down and let the other monks do their job, or vice-versa... also flat out powerful for RA where the monk is the primary target, this + Healing Breeze could easily counteract nigh all degen in situations. Kamahl 10:13, 14 October 2006 (CDT)

This is definitely replacing unguent on my ranger - 16marks, 13exp, and the 6 points I put into healing make this skill heal for 160, rather than 120 healing from unguent at 7 wilderness. Now, what do they consider a skill? O_0 I used read the wind/favorable winds, but it didn't end restful breeze. I'll test it out later and see what actually ends this. P A R A S I T I C 00:34, 31 October 2006 (CST) 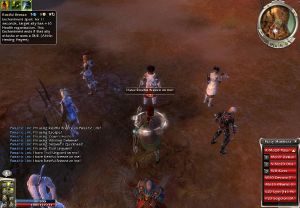 I have never use a bonder before, but it seems like this could be a good skill for a bonder to use in battle while waiting in the back so they can easily heal the damage they take.--Coloneh RIP

For those who are don't have Nightfalls (or if ANET has fixed it) can you tell us what happens (or used to happen) while using this skill with a "touch" skill? Frostty1 14:37, 1 December 2006 (CST)

One question: It ends when you HIT with an attack, or just attack? This could be perfect skill for 55 hp Illusion Weaponry farmer.- Abedeus 04:15, 24 December 2006 (CST)

Today when running Gates of Kryta to Lions Arch the point after Gates of Kryta (forgot it's name), has a whole bunch of Grasping Ghouls there. When they crippled me, Restful Breeze seemed to end. I waited for cripple to end and cast Restful breeze again, then I was crippled again and it seemed to be removed. Unusual? Haku Banish 02:06, 7 February 2007 (CST)

awhile back i was ganking in a gvg and notice the flag runner put it on an archer, not knowing it was removed when the archer attacked me. not as good as healing breeze on a flagger who also wants to beable to defend his base - anti oath

hmm, when it says Skill, does that include signets?

Yes. Like it says in the skill description, "This Enchantment ends if that ally attacks or uses a Skill." -

How would this skill work on warrior primary, in tanking situations ? --Aozora

I suppose ending a maintained enchantment or dropping an item would not end this enchantment.Chaon 03:50, 17 July 2007 (CDT)

Me happy (goes back to his Shroud of Silence A/Mo). It lasts with 0 healing prayers as long as pre-buff at 5 healing prayers ;p And it's a damn viable skill now... — Abedeus

Please explain to me why you would want an enchantment spell with a very short duration? --

For only 5 energy and no investment in Healing Prayers, it's hard to find a skill that can heal for 60 to 100 health with that little of energy and attribute investment. ImperialMike 19:33, 9 January 2008 (UTC)

I play Warrior profession frequently. I'm often looking for cheap self-heals. This skill costs little energy and provides healing quickly for a short pause. It isn't tied to Adrenaline gain so it can be used when needed and works well when rushing into a battle. ImperialMike 19:37, 9 January 2008 (UTC)

Healing Signet. Every warrior specs in Tactics. Else: Lions Comfort. And why would yo uend it prematurely anyways? ---

Not every build I use as a Warrior uses Tactics. I often have 20 in Axe and 20 in Strength and no Tactics attribute investment. Lion's Comfort requires Adrenaline gain. This skill does not have those same limitations. ImperialMike 19:40, 9 January 2008 (UTC)

Wow, you pown the shit, HARD. 20 axe, lulz. Anyways, this skill has the restriction of Eneergy cost, Ench Remove (shatter HURTS), interrupts (yes, so do Heal Sig and Lions, tho) ---

I can get more from this skill for healing than I can get out of a Healing Prayers skill or even Strength or Tactics healing skills. It has flexibility for when it's used. It has a nitch. ImperialMike 19:44, 9 January 2008 (UTC)

Heal Sig has the flexibility of not having to wait for healing, wich is usually more interesting. And this is heavily countered by degen. not the point, we should be talking about the note. ---

And so is Charge, Mending, HEaling Breeze, Enraging Charge... ---

I can't believe you mentioned Mending...lol...that's funny. Healing Breeze requires investment in Healing Prayer's attribute. This skill I don't have to put any attributes into Healing Prayers yet still reap a good benefit from it. ImperialMike 19:51, 9 January 2008 (UTC)

Mending is just fine for running purposes. And you don't need to spec in Healing to benefit from Healing Breeze. BUT we shouldn't go off topic like that! ---

So because you two can't see the benefit from it you delete the one line addition to the Notes about "considering" using the skill for short duration. So short-sighted and close-minded. ImperialMike 19:53, 9 January 2008 (UTC)

Talking about short, lulz. Anyways, if you'd check the History, neither Loat nor I removed the note. Do your homework. ---

Fact remains, there are better ways to heal up 60 hp in 3 seconds. It's just a waste of Energy to prematurely end this. And I'm going to stop ranting here, else I'll flame your ass off ---

This skill provides +10 health regen with no attribute investment...that's why!

With a longer duration if you put more points in it. --

I don't need it to last longer than 8 seconds. I get all the benefit I want from it in that peroid of time. It provides flexibility in allowing me to put attributes elsewhere yet still have a nice healing skill for only 5 energy. ImperialMike 20:01, 9 January 2008 (UTC)

Look at Orison of Healing for example. For 5 energy, how can I reap +100 health after 5 seconds with that skill? I'd have to invest in Healing Prayers with attribute points and I'd have to cast it more than once meaning it costs me more than 5 energy. ImperialMike 20:06, 9 January 2008 (UTC)

Pick any other 5 energy cost Healing Prayer's spell. How can I get +100 health from one for no attribute investment? ImperialMike 20:08, 9 January 2008 (UTC)

Personally, I'm not questioning the wisdom of using it at low attrib spec (probably best way to do it), but saying to cancel it after x seconds. Cancel it when you need to, not because you can. Lord of all tyria 20:10, 9 January 2008 (UTC)

let it rest already. Unless you give a good reason to end this after such few seconds, instead of letting it heal for more (and thus, more cost effective), the article stays at it is regarding the note. Don't try to compare it to other spells, this one spell is just also strong at zero investment. SO WHAT? ---

All I'm saying is I have the option to cancel it after X seconds if I want to. If I want to attack or use another skill I can...with this skill canceling as a result. I'm not limited to waiting for the entire 8 second duration. I don't have to wait...I can cut it off if the situation calls for it. ImperialMike 20:13, 9 January 2008 (UTC)

Imperial Mike has a point. HoT can be much more useful than a direct heal, in that it: puts less stress on the monk, makes you harder to kill for a duration, counters degen, etc. Plus, a 10 pip heal with no points in Healing Prayers makes this a very useful skill for people who need those attributes in other areas. The fact that it ends on attack or skill is a minor drawback, as it's not hard to stop attacking and using skills for a short period of time. --

Well, Mike stated it was good to end it prematurely, basically. It is obvious this can be ended at any time, but why would you want to do so? I;d rather heal and fight, lolz (not that I heal myself often...) ---

The note fails, as its form suggests it is better to cancel halfway through rather then to cancel if/when you have to. Lord of all tyria 20:19, 9 January 2008 (UTC)

You STILL gain a good benefit from this skill in 3 to 5 second duration. People are so close-minded that they think they HAVE to keep it up for the full 8 second duration.... meaning they can't do anything for 8 seconds. That's just not true. You do gain 60 to 100 health in 3 to 5 seconds and then can get back into the battle. For 5 energy gaining 100 health in 5 seconds is worth it to me. ImperialMike 20:22, 9 January 2008 (UTC)

And you STILL DONT GET THE POINT THAT YOU ARE A FOOL IF YOU SAY IT IS A GOOD THING TO END THIS PREMATURELY! You also can do thesame with HEaling Breeze and Release enchantments, but that's no reason AT ALL to place a note o nthe article page. It is obvious you dont HAVE to keep it up for the whole 8 seconds. You honestly phail if you think you HAVE to And as I stated above, I should have stopped commenting here. ---

I only cut off silly responses. I never declared myself as the decider of anything, except my own opinion. I just am very fiery about my opinion oftenly,and if I don't restrain myself from voting, I flame. ---

My note said: "Consider using this skill for short durations of 3(+60hp) to 5(+100hp) seconds." This is intended to get people to think "out-of-the-box" and realize you don't have to stop everything for 8 seconds to still get a good benefit from this skill. ImperialMike 20:26, 9 January 2008 (UTC)

Viper, do not flame anyone. I think Viper is saying that the way it was worded, it made you sound like you were saying that it would be good to stop it early for no reason. If you can reword it, I'm sure we could be make it into a useful note--

Yes, I know I shouldnt have flamed him. It's just plain, fucking, damned obvious that ending it prematurely ends in a decent heal anyways. ---

So something like: Consider using this skill even if the full duration is not achieved. Good benefit can be reaped for even short durations of 3(+60hp) to 5(+100hp) seconds. ImperialMike 20:34, 9 January 2008 (UTC)

"Because this skill has a short recharge and low energy cost, while providing high regen at a low attributes, this skill does not need to last its whole duration to provide reasonable healing." I don't really like mentioning specific numbers. Lord of all tyria 20:38, 9 January 2008 (UTC)

that's reasonable. I include the specific numbers because it's nice to see them to compare it to other healing skill choices. Some people don't realize just how much healing takes place in just 5 seconds at +10 regen. Compare to Feel No Pain at max Norn. This skill heals twice as fast. ImperialMike 20:40, 9 January 2008 (UTC)

I would like to assume people can multiply 20 by 0...8. Using specific numbers when you can cancel at pretty much anything beyond 3 seconds seems unnecessary (Hopefully people realise a 1 second cancelling isn't helpful.) Lord of all tyria 20:46, 9 January 2008 (UTC)

I would like to think that also, but even I had to look up Pips to check what the health gain is per pip. There are 13 year olds that play this...including my own 13 year old son. I assume nothing! ImperialMike 20:48, 9 January 2008 (UTC)

There are lagitimate situations where the character will want to neither attack nor use a skill, but be subject to damage. Running, Flag Running, Bonding, ... what else? During combat, such situations are very rare, except perhaps for folks who are running for their lives (either due to disaster or as a take-aggro-kiter). I suppose super-energy-drain nukers may get some benefit from this; fire away then cast this and wait 10 seconds while you are healed and regening energy. This seems hopeless for Tanks and Rangers who want to be attacking all the time. Oye 04:43, 4 February 2008 (UTC)

I was wondering if H/H knows to stop attacking and using skill while this is on them.

Henchmen definitely don't, and so I don't think heroes would either.