(formatted anon post above for better reading)
Thank you for not changing the article straightaway and posting for discussion first. Here are some considerations:
--Ab.Er.Rant

I'm glad I see this here, because I was actualy goin to mention the possibility of FoW being on the Ring of Fire Islands. Reasons: Although my guild wars is currently having issues, so I can't check, but I believe that the mapped area of FoW did show up on the island chain the the south(southeast?) part of the area.

Now I do know for sure that this area DOES show up on my tyria map for my warrior. however i can not confirm what made it show up. So, my possible ideas are as follows:

There might be a reference between FOW and Ring of Fire. Because Balthazar's realm is the FOW and he is god of FIRE and war. And there are some lava area's that can cause burning (fire). And, next to that, it's said in the description of the Abbodon's Mouth, that going through the door of Komalie would be an entrance to the Rift (or something like that), so the Fissure of Woe. And, about the considerations pt. 4, the Crystal Desert is also filled with ghosts.

Door of Komalie goes to Foundry of Ph41led Creations. The relation between Fire isles and fire God is far fetched, imho. --

This may just be me being paranoid, but I noticed that some of the rock carvings in the Ring of Fire are similar to those in the Realm of Torment. Observe: 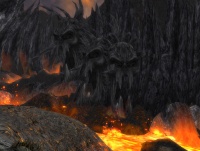 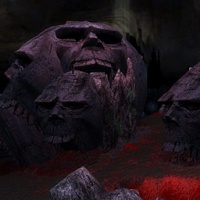 There are others like these but you need to look closely.

Well... if you ask me, the one on the left look more like skulls with jagged edges, and the one on the right look right squarish faces of golems or such. Similar yes... but... what's your point Marin? That they designed Ring of Fire with Realm of Torment in mind? I highly doubt it. --Ab.Er.Rant

Does not include Perdition Rock?[edit source]

When speaking with Captain Grumby (who is located on Perdition Rock) he offers to the "Ring of Fire Island Chain" which implies that his current location is not included. Separ 15:38, 1 February 2009 (UTC)