Wielding a sword and a shield while donning the same armor foes not mean she is a warrior. Bunny Thumpers are not warriors, even if they wield a hammer. --Karlos 08:42, 14 September 2006 (CDT)

Ghostly Hero is labeled as W/R. But I can one up you one better - Saidra is R/Mo! That's right, she uses Heal Area in Ice Caves of Sorrow. It's really hard to get a screenshot because she "dies" in about three seconds, but I swear it's legit. I'll have to get a screenshot to prove it of course, just wait. :) Entropy 06:17, 30 December 2006 (CST)

Yup, finally proof that Saidra is R/Mo: I wasn't able to save her butt though :-/ It's actually ridiculous; if she's supposed to die than why give her Heal Area ? And to think someone at Arenanet is being payed for making stuff like this up...--Erszebet 11:21, 30 March 2007 (CDT) 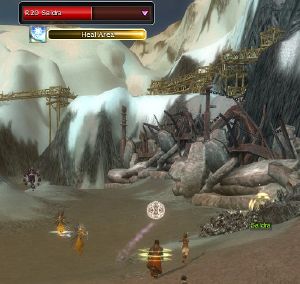 Gah, darnit, I finally managed to get that same screencap today, and you already beat me to uploading it >.>

Well it doesn't work 100% of the time, and I finally figured out that if you skip the cutscene, Saidra just dies immediately. Besides that I didn't have anymore new characters to take thru the mission...no point in going just for a screencap, I'm too busy for that. :P

As I was completing A Brother's Fury, heading into The Wilds for the first time she showed up on my party list as an ally and headed into the Wilds a bit ahead of me.