NP, people have issues with that for a lot of the creature species. Off the top of my head, the only other ones I can think of that have (Species) tagged on at the end and Grawl and Phantoms (because of Grawl and Phantom) But there are probably others. --Rainith 12:21, 23 November 2005 (UTC)

The Maelstrom article lists this creature as appearing in Twin Serpent Lakes as well. Can anyone confirm or deny this? Evil_Greven 07:47, 1 March 2006

To be honest I am not sure where this information has come from, he is not listed on either the talmark wilderness or twin serpent lake articles and I had a little look and could not find him. Does he even exist? --Lemming64 17:48, 2 October 2006 (CDT)

I have just scoured both Talmark Wilderness and Twin Serpent's Lake, clearing all mobs, and he is nowhere to be found. Looks like the boss may have been removed from the game. --Emelend 16:10, 19 March 2007 (CDT)

I just was running the Talmark area searching for him (and getting a better map); I rezoned about 8 times in a row from Tears of the Fallen, each time checking the whole beach area for this guy to get a good screenshot of him, and I was not able to find him at all. I'm beginning to think he doesn't really exist. Unless someone can confirm a recent sighting of him (preferably with a screenshot), I'd say this guy is confirmed as non-existent anymore. Vidar816 01:13, 23 January 2008 (UTC)

Why not delete this article altogether? Nothing links here except the monster image project and a couple user pages. O_o RoseOfKali

Don't we still keep records of legacy articles? We aren't calling for the deletion of Clay Brick or Brick of Mud. I would see no point to delete this article either. --

But those are 1) complete, 2) linked to. This one is neither. I don't really care, it's just that everyone is now out on a hunt for his image, and there isn't one. RoseOfKali

Here is a possible accurate image of the boss? --

A rather awful image saying that the boss is level 24 while everyone else thinks it's 18? O_o This is even worse than I thought. :P RoseOfKali

Well for the mean time, I've uploaded the image that image from that site. I also added a 5th skill Aura of Restoration to his skillbar, as multiple sources have listed that skill as well. I'm not playing with his level just yet. --

Here is another image of the boss... confirming the lvl 24. The gui almost looks like beta days. Why could no one else find these images? If at first google doesn't succeed, try yahoo :P -- 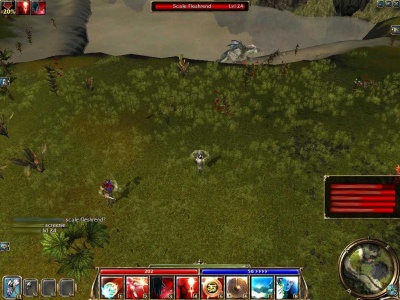 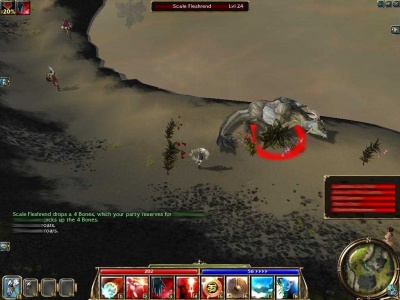 Ye, those pics are from Beta. On the uploaded image he is a lot different from Drakes nowadays - he has a square head, weird fins.. Oh well. ---

That is truly strange. I was digging around in the legacy pages and found this... but of all the legacies this is the only one that doesn't seem to have been removed for a reason. Were they overfarming him, or what? And it looks like he used the same skin as the River Drake in Pre. Qing Guang 22:00, 2 January 2009 (UTC)