Eli and several other henchmen are bosses during the Boreas Seabed mission. Should the boss versions be given separate pages orcan note be made here? --Sausaletus Rex 09:12, 30 April 2006 (CDT)

Skills confirmed with SoC. I dont think we should seperate the pages as I'm pretty sure they use the same skills.

Curious. I have a SoC screenshot from May 16 showing Dragon Slash, Hamstring, "Shields Up!", Healing Signet, Protector's Defense, and Resurrection Signet. I can provide this screenshot if needed. I would just update the page to reflect what I have, but seeng a differing SoC confirmation so recently before my screenshot makes me hesitant. --adeyke 01:43, 20 May 2006 (CDT) 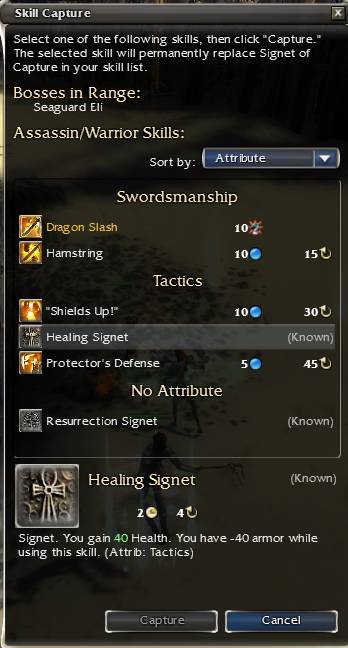 I have to agree with the gentlemen above me. I have the same SoC screen and I although I have not watched Eli in battle for the skills he uses, I do know he has never ran past my warrior to engage the enemy, thus I can only conclude that Sprint is not apart of his skillset. --Gares Redstorm 00:03, 4 June 2006 (CDT)

Changed his lvl to lvl 24 as he seems to be now.

Does Eli actually have this skill? It's not listed in his SoC, and I've never seen him use it as a henchman. I sat and watched him during several battles, and nada. --Zampani 12:58, 23 October 2006 (CDT)

I went through the history and it was added by Omen with this log: changed skills to match other hench layout. Copy-pasting error perhaps? --Ab.Er.Rant

where can i get s hield like THAT? or is it only for him? =(

Nope, it's for Stefan and Little Thom too. There are no normal shields with that skin, but there is a unique shield (from Prophecies). I forget which one, but it's there on the Shield page, and it won't kill you to click at unique shield links 'till you find it. G'luck! --Valentein 21:43, 1 May 2007 (CDT)

I just happened to know that its Grognar's Defender. Personally, though, I never liked the look- I'll take a black Crimson Carapace Shield (or an undyed one for that matter) any day over this. -Mechasoupx 22:01, 1 May 2007 (CDT)