The test weekend shows that this skill will soon be useless. 20 secs you get 4 attacks that deal bleeding. The critical barrage build is pretty much dead now. ~the Rat~

Maybe the 'critical' part of it is "useless", but since Sharpen Daggers is still an enchantment instead of a prep, it's still useful with Barrage. Now instead of 13 seconds of conditional bleeding, you can keep up to 30 enemies bleeding continuously without even having to do a critical. (5 uses of barrage on unique enemy clusters of 6 each time) I don't see how that's a bad thing. Note it says the next N "attack skills", not next N "hits". --Tometheus 17:22, 21 January 2007 (CST)

I tried A/R Crit Barraging last night, and I eventually stopped using sharpen daggers completely because of the nerf, as it seemed like it was the next x hits, which is mostly worthless. Just tested it with Barrage again, it functioned as "hits". The bleeding only occurs on usage of attack skills now, so maybe the description is actually something like: 'the next x hits of the next x attack skills.' I have to go to class, but it might be worth it to test with just 5 normal attack skills, have the first be Dual Shot, and see if the last one does inflict the bleeding. Zaboomafoo 09:40, 22 January 2007 (CST)

Yeah, this skill still does the 'next x hits of the next x attack skills' as tested above. Increasing the number of 'attack skills' doesn't really make up for the fact that this skill is still near-worthless now. Zaboomafoo 22:41, 1 February 2007 (CST)

...The skill still works just fine, now you can control when you want the bleeding too. Want it to 7 different targets, no problem. Old Sharpen Daggers, you needed to use something like Wild Blow for a guaranteed crit if you wanted bleeding. Also, Stoneflesh Aura, Stone Sheath. This skill is still viable. Entropy 00:59, 2 February 2007 (CST)

Just tested with both a dagger combo and dual shot string; it is indeed 'next x hits of the next x attack skills' and Dual attacks DO trigger twice. I'm making a note. Zaboomafoo 08:18, 2 February 2007 (CST)

I just did some testing on Isle of the Nameless, if a skill-based attack is blocked it won't cause bleeding and won't use up any charges. -- Gordon Ecker 03:39, 6 February 2007 (CST)

When an enemy uses an attack skill, you recieve the bleeding condition and it uses up one of its charges, I have tested repeatedly it at 8 critical strikes (4 charges) with an oni, its entire combo (Jagged Strike, Fox Fangs, Horns of the Ox) used up my sharpen daggers, I would put that little bug template, but I don't know how to summarize it without confusing people Wyvern Afini 17:34, 19 February 2007 (CST)

Wait...you mean if you put on Sharpen Daggers and a Warrior hits you X times with Power Attack, it'll use it up? o_O Strange...Are you sure the time limit didn't simply expire????

I'm sure, the oni uses its combo within 3 seconds of reaching me and uses it in order, by the second hit of horns of the ox it dissapears. I'm going to try this with other human characters later Wyvern Afini 17:40, 19 February 2007 (CST)
Edit: Tried it, they can trigger it, spirits can too, but pets skills can't, I don't know if that was to be expected Wyvern Afini 14:46, 24 February 2007 (CST)

That's bad news, this skill doesn't need to get any worse at the moment. If the "bug" is a feature and not really an error I'm putting a LAME tag on it. >< 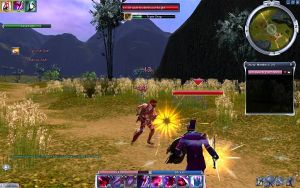 The skill being used is Furious Axe, in case its a bit hard to read, and the enemy is a Jade Brotherhood Knight, it's a sloppy pic overall but hey it's just in case people want proof. Feel free to slap a delete tag on the image when it's all over Wyvern Afini 19:42, 19 February 2007 (CST)

that image says that you are bleeding, but there is no health degeneration on your health bar. the scrren also shows you taking 23 damage, when your health bar shows what appears to be maximum health. a thrid mistake i noticed is your name. When bleeding a upsidedown triangle does not apear, but rather your red bar turns a different shade of red... you missed some things in ur forgery =P...pwned -Echo ftw 17:47, 29 March 2007 (CDT)

No I have no clue how to even mess with images other than put text, other images on top, and arrows, I'll put a new, viable pic and slap a delete tag on the misleading one, sorry about the confusionDone... much better, sorry again for the confusion. Wyvern 18:08, 29 March 2007 (CDT) 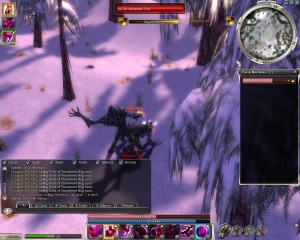 Seriously ANet, when will you FINALLY fix this bug? It makes this skill unusable.--

Does this skill even work?[edit source]

I used SoI and that enchantment and no matter what weapon I used, I was not able to make the target practice bleed. --Icyangel Strawberry 15:47, 10 March 2007 (CST)

It works as of a minute and a half ago. -Auron

To Bug, or not to Bug[edit source]

Maybe the supposed "bug" about attack skills used against you also causing bleeding isn't a bug at all. I mean, the skill itself never mentions your attack skills, and this wouldn't be the first time Anet has created an awful skill to use. It would also explain why they aren't fixing this, they are usually quite prompt to fix skill bugs. This could be exactly how they wanted it and we are simply seeing it as a useless skill with a bug. Marin Bloodbane (Talk) 16:25, 23 May 2007 (CDT)

I actually just thought that. It says "the next", not your next 1...8 attack skills. However, this seems like it would effect everyone, not just you and your attacker. --

If you use malicious Strike while under this enchantment, will the condition hit first causing the critical? Assailant of mordor 15:12, 2 July 2007 (CDT)

I realize this answer is a long time coming, but I just tested this and found out that Malicious Strike will not automatically critical when used with Sharpen Daggers alone. Lazuli 17:34, 20 May 2008 (UTC)

I'm not very experienced with sins, but this note just seems plain wrong: "Note that the skill says the next...attack skills used cause bleeding. Not YOUR attack skills. This means that your allies attack skills will cause bleeding too." Does this actually make sense? It's an enchantment that is cast on yourself: It has no bearing on your allies, and does not target any specific foe. I would've reverted myself, but I have no evidence otherwise. I'm just hoping someone else will notice and verify. --Foblove 07:40, 10 July 2007 (CDT)

I don't have the skill so I can't check myself but before the Update I could cause bleeding on the sin who used this...It is only natural to think that this causes your allie's attack to cause bleeding given the wording.

Yes, that's the way the skill used to work. The next X attack skills used (involving you), whether they were yours, or someone targetting you, would cause bleeding. I heard talk it was patched in the last revisions, but I haven't been on my assassin in a long time to test it.~Nahka~ 07:58, 10 July 2007 (CDT)

How does this work with gash will it apply bleeding and then give deepwound or will it just give bleeding i would test but i dont have this or gash on 1 char and im broke:(

Tested on the Isle of the Nameless, the bleeding is applied first, so Gash will cause a deep wound. Vainity And Sorrow 05:58, 16 February 2008 (UTC)

Tested, it will not give you the additional strikes of adrenaline.

no idea why this was nerfed, but i removed the notes since they no longer apply.--Ikimono"My beard is thick."

If it inflicts bleeding with every attack, wouldn't this cause a major damage spike if paired with an IAS and Fragility? --

No. Frag only deals damage if a condition is applied, not renewed. ---

This is only a nerf to sins who didn't use daggers, or rather, builds that should never have existed.