Dropped by Gulnar Irontoe during thee Kilroy quest in Sorrow's Furnace. Took a screenshot if proof is needed.

Got a Req. 8 max one with ench health +45 and damage -2 while enchanted from a shiverpeak chest

Also, page linking is messed up. Unless you capitalize it (eg, Shield, not shield, and Wing, not wing) it won't automatically redirect you here. Likes Nachos

Shield of the Wing Icongraphy[edit source]

Saw this during the last part of the Ruins of Surmia mission and knew I saw it somewhere. Just thought I'd share it with you guys. Khazad Guard 16:53, 21 March 2008 (UTC) 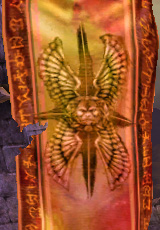 Is this one of the shields subject to severe clipping when carried by a female monk?