Well to the person with the first comment, no point to come from anywhere but cantha. You can lvl SOOOOO much faster there.Razorcloud 18:18, 3 March 2007 (CST)

If you're trying for Canthan cartographer with a character who was created before Factions was released then there's a point ;¬) RossMM 17:21, 14 June 2007 (CDT)

How can you tell if they're Canthan. We have no evidence that they are Canthan, for we have no idea what Canthan writing looks like. So, I'm changing it back ;D The Imperialist 17:14, 25 July 2007 (CDT) 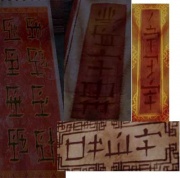 Stroll around Kaineng Center and you'll see plenty of Canthan characters on banners and so forth (example in image provided). The characters in the smoke (and Canthan characters in general) are [edit] for the most part [/edit] not real Chinese, although Canthan is probably heavily based on it for thematic purposes. Oscidaes 18:18, 25 July 2007 (CDT)

The image characters do indeed not look Chinese, but who needs the confusion? The Imperialist

Those characters (among others) are used as smoke sprites for those lamps, though. To say the smoke sprites are Chinese would be misleading. I'd probably go for removing the note altogether, however, especially since those smoke pots are in more than just Shing Jea Arena, and just having it mentioned here seems kinda pointless. :\ Oscidaes 20:01, 25 July 2007 (CDT)

You're right, Cantha doesn't exist in the real world and was inspired by Asian culture, but I don't see why that matters. The smoke pots are keeping with the game's lore and hence are Canthan. BigAstro 21:00, 25 July 2007 (CDT)

Then again, we have no idea what Canthan looks like. For all we know those could be another language. It might be Ancient Canthan, current Canthan, random symbols or some other things. Again, the only way to see if they are Chinese is to have a person fluent in Chinese stare at the pots and enlighten us Hahaha

We know what Cantha looks like - the entire Factions campaign takes place there. There are even examples of Canthan writing in the screen shot right next to this discussion. My entire point is that Anet built a game world based upon, but totally separate from, the real world. Within that context, anything in game is part of that world, even if it resembles something in the real world. I'm not trying to be an ass and I don't care greatly about what the note says, but I'm almost positive the developers added those symbols coming out of the pots to enhance the quality and cohesiveness of the virtual world, not to make a reference to real life Asian culture. You're right, it's possible, although unlikely IMHO, that they are actual characters from a real language. If that's the case the note should state it directly, but until that can be confirmed I think the logical way to look at it is what I said above. BigAstro 21:48, 25 July 2007 (CDT)
I'm familiar with the language enough to say the characters coming out of the pots and depicted on the banners aren't real Chinese (hence my original revision of the note). :\ But, of course, you could always ask someone in here. Oscidaes 23:28, 25 July 2007 (CDT)

Can someone confirm the bug note on the page? Seems sort of unlikely. I would, but alas, I don't have factions.--

Can you retest it?--

I can confirm the existence of this bug; I've seen it exploited many times. However, I'm going to correct the wording of it as it makes very little sense. Vala Nyx 12:37, 17 April 2008 (UTC)