That is one silly progression table :p Skuld

Agree. Should be changed to 1x Damage, 2x Damage, 3x Damage, by someone less lazy than me.

The table is confusing me, does the damage from nearby and in the area add up on the adjacent foe? Or does this skill just have a lot more text than the effect deserves?-Only a Shadow

Man, I like crystal wave better than this. It is armor ignoring. I dunno. This skill is overused and not as effective as I would have hoped. Make it armor ignoring and then make it elite. ubernoober

IIRC, it doesn't "add up", it would show up as three separate damage number when getting hit from up close. That is, you'd receive the indicated damage once, twice or three times depending on where you are. This means protections/dmg reduction gets applied to each "wave" individually. --theeth 10:59, 23 April 2006 (CDT)

Wow. Why hasn't anyone made a team for this yet? Ooh man, I want this skill. - Jack

They have. I've watched a team of 5 Elementalist/Assassins using Death's Charge, Aftershock, Crystal Wave, Shockwave, and Obsidian Flame. Single targets got hit by Obsidian Flame, grouped targets got wasted by the above. They also had at least one of each Ward in the group, and an E/Mo and a pair of Mo/Mes made up the remainder of the party. - Greven 19:20, 25 May 2006 (CDT)

It's not overpowered. Think about it, think of, say, Flameburst.. Both require an ele to come in close to be able to obliterate people with that and that's the catch. The build of E/As doing that is mentioned in the manual if anyone bothered to read it. --Karlos 05:43, 26 May 2006 (CDT)

The overpowered skill is clearly Death Charge (not Shockwave). Look at how common that one has become in GvG already. --Xeeron 06:52, 26 May 2006 (CDT)

Please explain how that is overpowered?! it has a 45 second recharge! Skuld

Well lets not say overpowered, but it really creates a huge advantage (or reduces a disadvantage, whatever you prefer) of melee fighters. A good part of the "defenses" of any monk or caster in a guild match relies on being in the backline. That is, enemy melee fighters have to pass your own fighters leaving the healing range of their monks (and possibly go into the aggro range of your NPCs). Furthermore, good monks will back away from (kite) warriors, before they are even reached. However with Death Charge, warriors effectively get a spike skill: Have 3 W/A charge up on adrenalin, then hit Death charge on the same target and all use their adrenaline based attacks. Extremely hard to anticipate and to counter. And since warrior spike usually has a pretty long recharge (adrenalin build up phase), you should be able to use death charge on about 50% of your spikes. --Xeeron 07:15, 26 May 2006 (CDT)

Ok let me clear up one more thing: I feel that the whole shadowstep ability is a overpowered, not Death Charge compared to other shadow step skills. --Xeeron 07:17, 26 May 2006 (CDT)

The whole idea of Assassins is that they are using a different kind of evasion, I'm pretty sure in chapter 3 or 4 we'll have a nature or binding ritual which punishes Shadow Stepping or prevents it all together. --Jamie 07:21, 26 May 2006 (CDT)

Agree with Xeeron. Watching shockwave do 3 times 21 damage is extremely daunting for the risk you put in using it. And a squishy only needs to use the 9th skill slot (move) to avoid most of the damage combination built teams apply. Even Shock then Shockwave can miss MaxDam thanks to the inherent motion lag in online play. A good combination will need to apply bare minimum 10 damage packets to overcome prot spirit, but in that time, there should be at a single RoF coming off, meaning you'll at least 2 more packets, which usually buys enough time for another Divine Favour spam like prot spirit. After this Once-At-The-Start gambit has been fired and overcome, you will understand your opponent completely, and even 45 seconds later when they have the energy and skills back, they'll not surprise you with it again. Favourite use: Obliterating close knit Ranger Spikes and the much loved 4xR/N. Shockwave is one of those rare ones that make Arcane Mimicry look useful. It's a lot more fun than practical, it'd be a shame if they nerfed it, so I guess they probably will.

I've had a lot of fun on my War/Ele with this elite - it's only ten energy and a good recharge for a lot of damage for a lot of people around you. Being that Sliver Armour and Armour of Earth are the only other energy-costing skills on my bar, it's quite useful for mob cleaning.--Dragonaxe 02:05, 23 June 2006 (CDT)

The problem with Shockwave is that the only part that's really interesting is the adjacent damage and in that capacity Aftershock is simply better. Additionally, since both of those spells have the crazy long aftercast they have pretty much no synergy. So I basically only consider Shockwave when I've already got a good build out of my non-elites and don't need elite energy management. In other words, not often.--Mysterial 13:48, 25 July 2006 (CDT)

I changed the table as I think this one is more useful.

As stated before, my Warrior carries this and Armor of Earth. Thus my secondary provides me with a powerful defens and an offense for beating back enemies who surround me. But occasionally in areas demanding high amounts of protection, I'll use Obsidian Flesh instead. But this helped very well in Hell's Precipice, killing all those Titan respawns, especially when Bleeding don't work on em. Urock 17:22, 26 April 2007 (CDT)

well,2 things,this page is talking bout shockwave not deaths charge O.o,and second umm armor of earth+stoneflesh aura makes u invincable basically,wouldnt really have a squishy ele for this skill since u alrdy got investment in earth magic and 7 slots of fun left,and if u ever consider arcane echoing this skill,it works extremly well,try the following-ele/mez tanker-stoneflesh,Armor of earth,arcane echo,shockwave,silver armor,stone striker,mantra of earth,optional,and then a ranger partner with qz=dualing of anything without enchant stripping or heavy degen,too bad they nerfed the deep,this used to be fun ><, and for those of u not convinced,see joffs the migitator,the boss has basically this same build,and he can wipe a party of 8 in like 10 secs

I think someone was trying to say that, because it's really three seperate damage packets, it doesn't get cut as much by Prot. Spirit. But it's a bit of a silly note in the first place, wither or not it "triggers" Prot. Spirit all depends on the target's health, as well as a few other variables. --

Not enough people go through the skills and check the notes. :D --

First of all....Human AI? I guess you don't know what AI stands for. Secondly, any mesmer that doesn't suck horribly can interrupt a 3/4 cast and depending on how far away you are, a ranger should be able to as well.

But they can damn well predict when to cast CoF when 6-8 Eles jump towards a target. ---

All I'm saying is I saw the mesmer in the #1 Guild (uF?) on observer mode singlehandedly shut down an entire team (sup?) after she figured out what they were doing, using Cry of Frustration. It was an inspirational moment. Cunning > gimmick builds. All the elementalists could do was feebly fling around Obsidian Flames.

Right you are, sir!

Aftershock needs shorter cast time in order to be able to hit foes while they are knocked down. This has no such conditional requirement and is far more damaging, hence the minor nerf--

This bypasses Spirit Bond, and AS does not. Thats why this is Elite and nerfed, and AS is not. ---

I am removing the following note: + Using this skill at 14 Earth Magic will allow you to deal 171 Earth damage and still ignore the effects of Spirit Bond and most likely Protective Spirit.

For one, the damage table is clearly indicated and explained above, and having it here is a redundancy. In addition, this skill does not bypass or otherwise ignore Spirit Bond or Protective Spirit. While it does "trigger" it multiple time because of multiple damage increments being applied, this is no different from other skills like Dual Shot, which doesn't have a similar note. Overall, this note is inaccurate, confusing, and redundant. If you have any questions as to how PS and SB affect this skill, see the following screenshot. 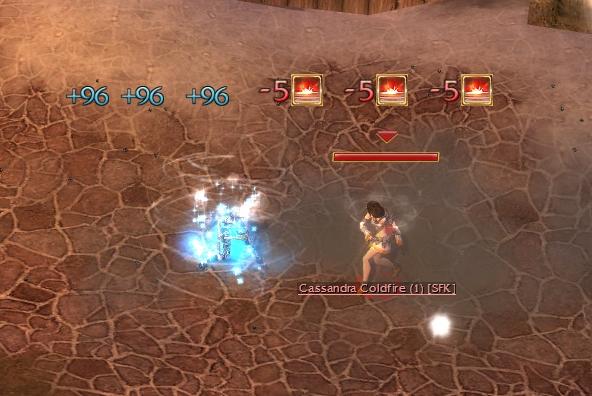 It's saying that it won't deal enough damage to trigger Spirit Bond at that level of Earth Magic, and each of the hits will still hurt them as normal --Gimmethegepgun 17:14, 31 July 2008 (UTC)

Ye, the note is talking about normal situations, with 600+ hp. SB won't proc since SW will hit for 57, and PS won't proc since it's slightly less than 10% hp. And even when a major is used, PS only has a small effect. And when you use a sup, you're dead meat anyways. --- 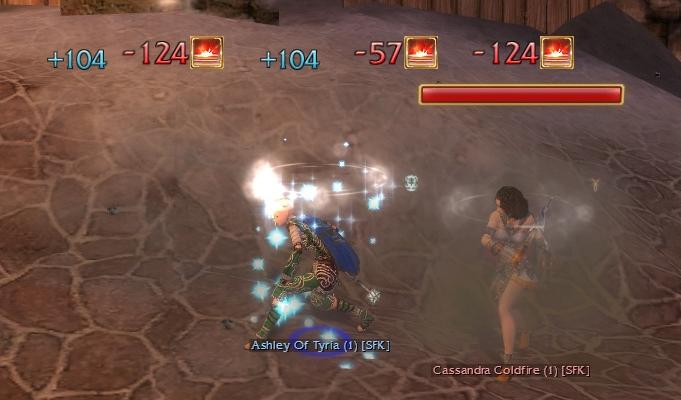 This is the effect of Shockwave at Earth Magic of 14 on a 600 monk enchanted with Spirit Bond, contradicting your claims. I stand by my assertion that the note be removed and will go ahead an do so. If you disagree, feel free to revert the article and throw up a dispute tag.

I believe that my above arguments present a strong case for the removal of the afforementioned note. Warwulf 18:13, 31 July 2008 (UTC)

The picture there actually does support our point somewhat, however, since it seems that 1 of the 3 hit a 60 armor piece, and did not trigger SB, which is EXACTLY what that note is talking about --Gimmethegepgun 20:29, 31 July 2008 (UTC)

It should be noted that that note counts for PvP, since in PvE (generalisation) every newb/blatant noob runs around with 400 hp (and the rest with 550+) and non-max armor found laying on the ground. If you're running <600 hp in PvP, you're doing it wrong. (AB is not counted as PvP in my books. You mainly fight NPCs and some dimwitted people) ---

It should also be noted that Shockwave is very popular in RA, where plenty of idiots run around with 480 HP.

After seeing the new wording with "takes +xx dmg", I wondered if that meant if the damage was done in a single packet, but I tested it and it's still the same as before. 3 separate packets of damage on adjacent etc. --