Hmm, that's interesting. So if I use "Watch yourself!" and then "For great justice!" the justice will over-write Watch? But if I use Watch and my friend uses Justice they both work, or..? Nunix

i don't really have much experience with shouts, since i don't use them, and i rarely party with warriors. but i noticed that this article was incorrectly titled "stance" instead so i moved it. Nuble 13:15, 10 Jun 2005 (EST)

Yeah, I think that's about right Nunix, basically shouts (not stances, just to be clear) only stack if each shout is cast by a different player. LordBiro/Talk 21:46, 10 Jun 2005 (EST)

I can use "Watch Yourself!" and "Shields Up!" at the same time.. - Supersonic^

To clarify for anyone who does not know how shouts work, I went out and took this screenshot. 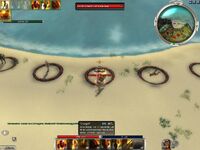 I only tested it once, but I'm pretty sure that shouts affect necromancer minions too. I raised a few minions and used "Charge!" on them, and they ran a lot faster. Just something to add to the article.

Some [all?] shouts are cancelled if you use Stances after using the Shout. I haven't had enough experience with the game yet to know if all Shouts are cancelled by assuming a Stance, but so far, I know Watch Yourself is cancelled when I use Bonetti's Defense and Defensive Stance. can someone with more experience add info on this? —The preceding unsigned comment was added by 128.226.220.149 (contribs) 20:50, 30 November 2006.

I have never had any of my shouts cancelled by activating a stance. I have many times used "Watch Yourself" with Bonetti's Defense. So it seems unlikely that that's the reason your shout is going away. It is most likely that the shout has acutally simply expired on its own, or that it wasn't removed at all, since stances take priority over shouts in your effects monitor, they apear on the left side of them rather than the usual right. --Curse You 04:58, 10 December 2006 (CST)

Do shouts with a one time effect like "Go for the Eyes!" end after there effect is used or do they still remain active until their time runs out?—

That depends on the shout. If it says "Ally" or "allies," then yes, it would affect minions. If it says "party member(s)," then no.

That's gay, there is a total of 6 skills that effect "allies" and the rest affect "party members" or "Target other ally" which is too energy/adrenaline intensive for what i wanted. Would a Shout warrior do alright? Nvm, i suppose thats what paragons are for Renegade Shinobi 00:17, 19 November 2008 (UTC)

Meh dunno why people like GftE! and use them like on every skill bar, includig Imbagons... It's not like critical hits are awesome or something in PvE... --Alf's Hitman 04:29, 19 November 2008 (UTC)

It's one of the only shouts that affects allies. Spammable and ends quick (for purposes of renewing Refrains), free energy, gives Deep Wound with Vicious Attack, for other attack skills you also land a pretty strong blow (e.g. Spear of Lightning)...etc.

Yeah, but Scythes have the most to gain from getting more crits since the max damage is so much greater than the average damage --Gimmethegepgun 12:13, 19 November 2008 (UTC)

Along with helping any sins with energy management.

If a sin needs assistance with energy management they're doing something wrong --Gimmethegepgun 20:06, 19 November 2008 (UTC)