My friends are gonna make funn of me. my nickname is sloth =/. Dark0805

why is there a female elementalist with a blindfold in the skill icon? its just wierd it would be a ranger :s

The bonus damage is insane. I mean, just ridiculous! +34 for interrupting a Skill; +65 or something if they're not doing anything; +32 unconditionally; +50 or so on a Critical. And in PvE, if you use Sloth Hunter's Shot for your first attack, you are practically guaranteed to hit a foe not using a Skill.

Oh, and in other news this combines well with Tease, Wastrel's Worry, Blackout...

Yeah, of course I have. The point is, you can combine for pressure/spike. Both WW and Sloth Hunter's Shot encourage them to use skills. This causes panic moreso than either skill alone. WW -> 67 or so damage right? Well, perhaps that's not enough to entice you to use some skill...Sloth Hunter's Shot -> another 65 or so damage right? So, same thing. But! Combine them together, and if you don't hurry up and use a skill you get about 130 armor-ignoring damage. That's enough to cause panic for any PvP player, imo. Either way they are screwed: they either have to use some skill prematurely (giving you opportunities for disruption) or they take huge damage. To be honest this skill could have been called "Wastrel Hunter's Shot".

I don't like when people discuss the old Mesmer ways in public. The days of causing havoc are dead, as is with chivalry, and besides, hardly anyone is good at it anymore.. Zulu Inuoe 18:25, 5 August 2007 (CDT)

Izzys' way of buffing Bow Rangers I guess. Not like Rangers in PvP will take them anyway, since damage is not their specialty. Might be useful on splits, but with no new elites, Burning Arrow is still pinned to their skillbar. At least until the balance update that's incoming, but that isn't likely to touch on Ranger elites. --Kale Ironfist 19:56, 5 August 2007 (CDT)

Add in a Sundering Hornbow where you get the lucky trigger while you're on a hill. I could see some serious damage coming...DUCK!!! I've had some very lucky hits in Aspenwood firing from the hill above Master Gunther doing 120dmg with my Sundering Ivory Bow with Burning Arrow. I am so looking forward to using this.--BeeD 01:00, 6 August 2007 (CDT)

And I get crits relatively often with Keen Arrow on my Glass Arrows build for 135 or so, instead of using a PoS attack like BA --Gimmethegepgun 02:12, 15 August 2007 (CDT)

Maybe put this on a D/R AoL build, use it when enemies aren't using skills and attacking normally when they are..Entheos Geon

Tested this yesterday to great effect. This is an excellent skill but certainly not too powerful.

Could someone add a note saying that it combines very well with the Dazed condition. Pretty much in the same way that savage shot won't give you the bonus damage if you try to interrupt someone that is dazed ( because the hit interrupts before the skill does ), you can use slot hunter's shot to great effect on a dazed opponent since he will be interrupted before the conditionnal damage is done. --Kyrax 12:24, 25 August 2007 (CDT)

0_o lets get mean about this... ranger/ele... with your favorite conjure spell... and kindle arrows, and savage shot...and this... with concussion shot and heck even incendiary arrows! each hit will interupt, do bonus damage from prep and conjure, and if u use sloth hunters u get a nice spike in there.. follow with concussion shot to the healing spell u know is coming.. and then pick the poor caster off at your lesiure... life is good =) Morvick 22:44, 6 September 2007 (CDT)

Incendiary without Serpent's Quickness can't be maintained, so that's an ineffective tactic in full 8-man PvP...and your poor Energy management >.> 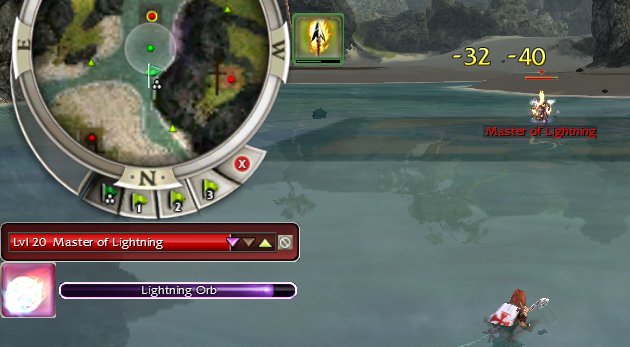 heh yeah energy would be a bit rough.. but im putting ideas out here so people can see possible uses for these skills, not so that they can have an entire build to copy and use for free =) plus u dont have to keep incendiary up all the time... pressure damage compliments spikes.. but u knew that entropy =) Morvick 22:52, 6 September 2007 (CDT)

I think not. Only thing in common is unconditional +damage progression. Ayumbhara (too lazy to log in)

They both don't cause bleeding, only one does. But I think they are related because of secondary conditional conditions. Flechette 22:18, 24 September 2007 (CDT)

That not what I meant at all. I meant conditions as in "under a certain circumstance" not as in "a type of illness or sickness on a person". They both have a conditional secondary effect. But I find they are not related by related damage at all because that would mean pre-searing rangers are related power shot, they both have *ahem* crappy damage outputs. Anyway, I say they should be split. Flechette 22:31, 24 September 2007 (CDT)

Well, when in doubt, scrap. No-one should be using Power Shot anyways :)

I put that relation there because both skills have the same cost, recharge and unconditional +damage. --Ckal Ktak 18:25, 28 September 2007 (UTC)

I think it might be worth adding a note about this skill's ability to severely damage enemy spirits/minions since they are incapable of using skills. Aside from punishing kiting(stanceless) foes this is the number one use of this skill in my books. With enough damage mods on I've been able to take out some annoying rituals with a single shot. --B1zz0b 20:15, 10 August 2008 (UTC)

You could add the note in yourself if you feel strongly enough about it. on a side note, I was using this in Fort Aspenwood last night on the Kurzick side and fired it off at a squishy, while under Read the Winds. Too my delight a -154 popped up ^^ BeeD 10:37, 11 August 2008 (UTC)

Don't attacking spirits use skills though? Pain uses pain, for example. Unless I'm very much mistaken, these attacks count as skills and therefore would prevent the bonus damage from triggering. However, sniping the passive spirits with Sloth Hunter's Shot is always an option. Lazuli 03:38, 2 September 2008 (UTC)

I believe they do, but the Spirits level is so low, even at the max attrib, that SHS will always do a ridiculous amount of damage to them, even when they're attacking. Usually one shot should be enough to reduce it to a sliver of life and since most players won't fully spec into that attrib, the spirit level will usually not be at its max. BeeD 08:54, 2 September 2008 (UTC)

Agreed. I'll see about adding this skill to my variant on the Glass Arrows spiker. I guess I haven't used it enough because when I play Ranger, dealing direct damage is the last thing on my mind. Lazuli 02:33, 3 September 2008 (UTC)

I've been using it a lot on a Burning Arrow Ranger in FA. Although it doesn't fire very fast, like the 1s activation shots, but it does a huge amount of damage when coupled with RtW. I usually play defence on the Kurzick side, sniping from the heights and sometimes going after the command points. Since the Luxons spend a lot of time running, SHS has ample opportunity to trigger its conditional damage. I regularly do >100 per hit with SHS. With RtW, BA does >90 damage on hitting, plus the burning, which I supplement with poison tip signet. Following up with SHS you can easily smash someone for >200 damage then needle spam them to death. --BeeD 09:52, 3 September 2008 (UTC)

It's hard to balance this skill without making it totally overpowered or totally lame, since the bonus damage is just huge. Probably it will see "Functionality changed to..." soon. (I really hate seeing those words now.)

I don't think it's as good as everyone makes it out to be. I don't use it. And everyone i see use it fires it at me while i'm halfway through Troll Unguent AND in a blocking stance. Maybe i don't like it because no one knows how to use it.--GerrOh! 06:19, 14 October 2008 (UTC)

I've found this skill to be perfect for fighting torment creatures, particularly when they use Call to the Torment: they don't use skills, and they take double damage (200+ damage easily). King Neoterikos 06:22, 14 October 2008 (UTC)

It also works well if you can time it with a knockdown of some sort, as then they could only use things like Shouts and those are instant.