Has anybody used this? How much energy do spirits have?

It's a spammable almost instant cast. That's the real strength of this. Plus I'm assuming spirits have energy regen. Shandy 23:37, 4 April 2006 (CDT)

Yes they have energy regen, but "target spirit loses all energy". So only 1 shot per spirit.

.. the talk page but just leave it

This is a very impresive skill, cheap energy cost, near instant recast, and it can give back a lot of your energy to literaly no penalties since spirits never use energy.

Net gain is 2-3 mana, making it one of the worst energy management ever inserted. If you want sacrifice 1/8 of your skill bar for energy management, even a simple Inspired Hex (Mesmer) at lvl 8 give you 3 energy and it's A WAY BETTER: you just canceled an hex!

Inspired Hex: 20s non-modifiable recharge vs Spirit Siphon: 3s recharge. Still, the only use I can think of is post battle recharge, with this for energy and Feast of Souls or Spirit to Flesh for hp. --Theeth

At its highest rank, this can be used for about half the energy gained from ether prodigy/second wind. very nice PvE spell, worthless is PvP tho: Who the hell is gonna stop kiting for 4 energy? totally needs a buff. Oh and with serpents quickness this is one of the top 10 or so energy management skills. (Not a fifty five 15:22, 21 September 2006 (CDT))

I was actually surprised how well this skill does with energy management. Once you have about 2 spirits up, it can get you energy faster then Essence Strike and doesn't require an enemy to target. -Hesus

I have found that the chart in the article is slightly off. I have a more accurate progression from tesing done on newly created spirits.

You could, yes, but why? In PvE you can just pull enemies away from their spirits. —Dr Ishmael

I messed up the table[edit source] 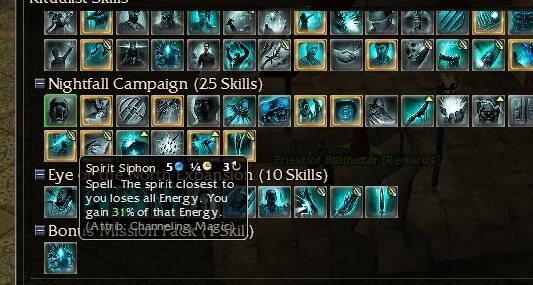 The catch is you need multiple spirits around for it to become worthwhile. If you have multiple spirits, can keep them alive (doesn't need to be for long) then this is good. Offering takes an elite slot but means you only need to have one spirit. The other thing is that OoS works better with a single long lasting spirit because you can use it over and over, while siphon (hehe, SS) needs you to spend energy on spirits regularly. If you're doing that anyway then it's fine but it forces you to use a particular type of build more than OoS does. -Ezekiel [Talk] 07:52, 28 June 2009 (UTC)

This + Signet of Spirits + Boon of Creation= big e-management for other stuff.--

I take it that's referring to enemy spirits, correct?

I'd say it is the same for all spirits.

I'm not sure; typically enemies have +1 energy regen than what is normal for their profession (iirc)
So I'm wondering if the same's true for spirits

/shrug
Something I've been quite sure of for ~a year. Hard to remember what got me thinking that to begin with...