Has anybody ever seen one of the following staves:

Once again those are listed in the "Confusing Collection of outdated and wrong Information" aka the Prima Strategy Guide. --Tetris L 01:42, 3 Sep 2005 (EST)

I've definitely never seen a Wrathful or a Sacred Staff. I'm not sure about the Dead Staff, too, but maybe we're confusing it with the Dead Bow, wich I'm quite sure of exists. By the way, I also have never seen an Eternal Staff. --Eightyfour-onesevenfive 04:26, 3 Sep 2005 (EST)

Speaking of wierd staves. I found a wierd (and awesome) Raven Staff that does Fire dmg, requires 9 divine favor, provides +29 health, improves casting speed, improves skill recharge for Air skills (17%) chance, and does +1 death magic. A complete and total mess of a staff! :) It's awesome though, and my Air ele is using it to deadly effects even though she has 0 divine favor. I have no clue what's going on here. what does "require 9 divine favor" mean if I can get all of it's benefits? :) --Karlos 19:47, 18 Sep 2005 (EST)

The requirement only affects the damage you deal when attacking with the staff. I assume it is max dmg, 11-22? When you don't meet the requirement the Staff will only have a base damage of 2-3 or something like that (whatever the minimum damage is you can possible have on a staff). But right, you will still benefit from all the bonuses and modifiers. On a side note, I read a lot of people finding staffes linked to three attributes lately. Wonder if ANet changed something about that. --Eightyfour-onesevenfive 19:58, 18 Sep 2005 (EST)

Eternal Staves, Raven Staves, Shadow Staves and Ghostly Staves seem to be TOTALLY random as far as attributes goes. I think it has always been like that. --Tetris L 21:15, 18 Sep 2005 (EST)

Just got a dead staff linked to Fire Magic (dropped by a Damned Cleric), so I'm going to change that one from Monk to the All Spellcasters one.--Rainith 13:06, 19 February 2006 (CST) 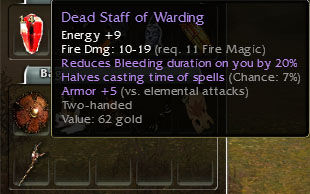 Is it me or are Cruel Staves only available as collector and PVP items? And if they are only available from collectors (and as PVP items), then are there Dead, Ghostly, Shadow and Raven staves with a blood magic requirement? -- Gordon Ecker 14:59, 25 February 2006 (CST)

I'm going to assume that, since there's no non-universal, non-collector blood staff, the universal staves can't have a blood magic req either. If anyone finds a ghostly, eternal, raven or shadow staff with a blood magic req, they can correct the page. -- Gordon Ecker 14:29, 11 March 2006 (CST)

And now that they've added non-collector blood staves in Factions, blood req universal staves are dropping in both Cantha and Tyria. I just got a white blood req raven staff tonight. -- Gordon Ecker 00:47, 5 May 2006 (CDT)

now that there has been an update with the new styles of the elementalists staves... does that mean that the staves that collectors have will also be in the new style? :D i hope so -- anonymous

Nope, both old and new elemental staves still drop and the collectors still have the old staves. The Factions collectors use the new graphics, you you should be able to get those or trade for them. -- Gordon Ecker 00:47, 5 May 2006 (CDT)

Can someone check which staves are available as normal drops and which are collector / crafter only? Off the top of my head, I remember Hyponotic and Conjuring staves dropping, and I strongly suspect that Communing, Channeling and Spawning Staves are only available from crafters and collectors

OMG, Trying to buy a restoration staff with a cool skin is like going through all of the stages of hell...

Added a section for Nightfall staves but can't really do much more , only staff i've found so far is air and cobra

Do we know that ALL staves will have a recharge bonus? Gordon added that recently. I thought it was just greens and collectors. --Karlos 22:21, 26 October 2006 (CDT)

I've rewritten the entry for Portal Staves with my own observations thus far, and the observations already listed. HolyCrusader 11:30, 22 December 2006 (CST)

Right now I have a wand that gives me bonus energy, though the article says no wands do. Is this just weird, or normal? Xiong Chiamiov 18:13, 14 January 2007 (CST)

It's not normal. Your typical max wand is 11-22 damage, req9, and may or may not give some +recharge to the linked attribute. Wands do not inherently have a +Energy mod on them. However they can have anywhere from +1...+5 energy, unconditional or not. You'd only find that on a Blue, Purple, Gold, or Green wand though. Because Staves always come with some +Energy, that's why the note is worded the way it is. Entropy 19:08, 14 January 2007 (CST)

Ok, so when did staffs and wands have damage depending on the hight. How does that work? If im lower than i do less damage? How does that work physically? Arena Net always has a RL reason for effects.--— Hyprodimus Prime

Testing on Isle of the Nameless for Damage calculation provided the following data. It's copied and pasted from excel, so you'll have to view the source to see it clearly.

What's the max energy a Staff can have with mods/inscriptions? I think it might be 30. I have a communing Staff from the NF end-game crafter that I modified with a +5 energy staff head. (10+5+15 with -1 regen)

Found a bit of an oddity - a Dead Staff with Spawning Power as its attribute. It was a drop in Sanctum Cay. Much confusion.

I have also found Raven Staff with spawning/channeling/whatever. I don't know if a Dead Staff or Raven Staff can drop in Factions, but it seems that some universal staves can have requirements/attributes/mods for classes in other campaigns.

I have a staff with no skill recharge chance in it, but lowers duration of Daze against me by 20%. I read this page, but it doesn't mention any of those kinds of abilities anywhere. Shouldn't that info be added somewhere? and in case you're wondering, it's a hale bone staff of warding, so the daze thing isn't coming from the wrapping or head.

It could be the 'inscription' on a staff which doesn't have a halves skill recharge mod...

"An interesting note, Focus Item additional energy does not stack with Runes of attunement."[edit source]

Crysocola staff what is it and where does it drop and is there a green equivalent?

Where does it drop, from what, and is there a green equivalent?

Hey, I know it probably takes a ton of work to do, but can someone make a visual gallery of staves, wands, and foci? theres so many, it takes forever to go through them 1 by 1