Given the brutal damage done by the Shadow Rangers compared to other high-level rangers in the game, I can safely guess this analysis is not exactly correct, but I can't pinpoint why. I can recognize a few issues like not factoring in Strength for warriors and not factoring in skills. but I just think something doesn't add up. --Karlos 19:50, 22 November 2005 (UTC)

It's correct given his assumptions and also a weapon attribute of 12. If what you're referring to is the shadow (horn) bow inherent penetration, I think the answer lies in something else (and I'm not sure why you chose here instead of armor penetration_. Mobs might not use the exact same damage formula or might just be given arbitrarily high attributes. --Fyren 20:15, 22 November 2005 (UTC)

I guess I was just confused about the reference to the shadow rangers. Think about it this way: look at the damage formula at the calculations immediately involving the enemy AL. One percent armor penetration removes 1% of the enemy armor. While there are armor buffs with significant effect, not a whole lot of mobs or even players in PvP use them. In the long run, 10% chance of 10% penetration is 1% penetration all the time. So 60 AL becomes 59.4, which perhaps gets rounded to 59. Even 100 AL only becomes 99 AL. A difference of 1 AL essentially scales damage by 2^(1/40), or 1.7%. Just for comparison, if you raise your weapon attribute by 1 (to 1-12), you effectively reduce the enemy armor by 5. After 12, it's only by 2, which even still beats 1% AP till you come up against really high armor. --Fyren 12:49, 23 November 2005 (UTC)

Agreed, that table in the "Criticism of the Sundering Upgrade" external link is pretty confusing to try to read/figure out.

Just a question about the math. I've been reading the wiki for awhile and am still quite new to understanding this armor thing but whilst I understand that +10 damage 10% of them time is on average +1 damage all the time; Since having armor reduces damage multiplicatively (which Fyren claimed), I'm not sure if it holds that 10% Armor Penetration 10% of the time is the same as 1% Armor penetration all the time. Not even sure if it makes much difference once everything is worked out anyways. Archon 17:39, 26 March 2007 (CDT)

The Wayward Wizard gives an Air Staff with a 10%/5% Armor Penetration mod. I've also heard there were other staves with armor penetration that were removed. At any rate, it's just more accurate to state that there are no Sundering staff upgrades. -Savio 23:18, 10 April 2006 (CDT)

I was testing the sundering mod today at Nameless Isle, i got a +20% AP and chance 10%, using the calculation provided by GWiki

0 strength 12 Axe should gives me

Then i increase my Stregth by 10

So, i increase strength to 12

So, unless my calculation is wrong, then i think there is a bug in sundering mod, that makes 20% AP on 10% chance to be maybe 10%AP on(w/e chance, not able to veriyfy the chance of sundering effect, since that require satistic stuff and i don't want to touch those area).--

its a newly created PvP character for testing Sundering mod specificly since people are discussing the effect of Sundering on GWGuru, the Mod that i unlocked is a +20% Sundering at Chance 10% -- 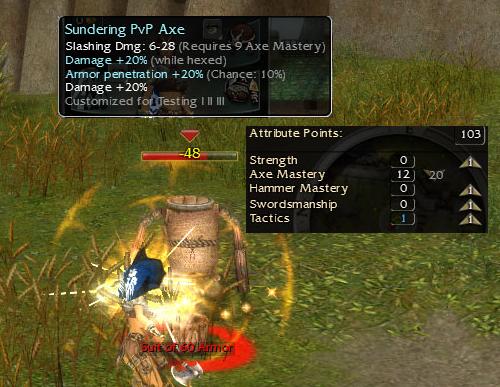 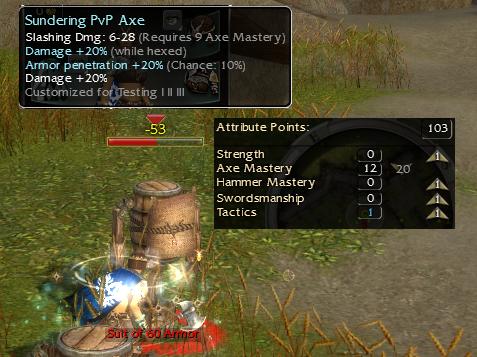 That is what im guessing atm, but i dont have any other sundering mod to test it --

Does the sundering prefix on a weapon effect only base damage of a weapon, or damage from the skill being used with it? I assume both, but couldn't find specific mention of it either way. --Mooseyfate 13:57, 13 October 2008 (UTC)

That sounds right, but bring up the question of skills that have armor penetration (i.e. Penetrating Blow). In that case does the armor penetration listed in the skill only apply to the weapons base damage (since the damage from the skill is armor ignoring anyways)? --Mooseyfate 14:16, 13 October 2008 (UTC)

Penetrating Blow blows (sorry for the bad pun) for 2 reasons: The Armor Penetration doesn't work on the bonus damage, and it doesn't stack with Strength AP. Instead, it just ignores Strength AP, thus effectively only adding a few points of AP (assuming 13str/14axe). Better off with more damage bonus (Exec, Body Blow...). ---

Ha, nice. Just wanted to get the functionality discussed here, not the validity. Very informative, thanks Vipermagi! For proper discussion of that skill, see Talk:Penetrating_Blow. --Mooseyfate 15:03, 13 October 2008 (UTC)

What sundering should do[edit source]