It recharges one signet faster than Mantra of Inscriptions ever will. --Ufelder 07:06, 26 September 2006 (CDT)

The problem with this skill is that it's just underpowered for being in Fast Casting. Most mesmers already spec in Inspiration as their energy management, so it's not a big deal to bring MoI or Mantra of Signets. If Symbolic Posture is going to be viable it has to be stronger than its alternatives in Inspiration, which are also easily used by other primaries.
Having said that, this skill is more similar to MoS than MoI. Trades an instant for a merely faster signet recharge for being cheaper and recharging faster itself.--Ufelder 02:04, 27 September 2006 (CDT)

yeah that's true, MoS makes this skill redundant. Saving of 5 energy really isn't worth it if your goal is to get it recharged as quickly as possible. (Terra Xin 09:40, 6 October 2006 (CDT))

If I was going to use Mantra of Signets, I would consider this because of less energy and faster recharge and the fact that making it like a 2sec recharge is almost as good as Instant recharge. Then I would immediently drop that idea because this is linked to Fast Casting (which I wouldnt spec into much if I was devoting a slot to recharging a signet faster...and it makes this useless for non-primary mesmers) - Former Ruling 15:36, 7 December 2006 (CST)

the benifit here is not that its better or worse than mantra of signets or inscriptions but that its a fast casting skill. simblkic celerity is a fast casting skill and to use both it and an inpiration magic signet buff ... u need points in inspiration. now i have not come up with a build or skill combo to suggest this is needed or weather there is even any signets that arent from inspiration that are worth buffing so dont jsut automaticly call me a noob like soo many wiki authors do. the point is that u can now use 2 different signet buffs from one atribute line. also who knows if there will be new signets coming out that will make them super good. also now that signets recharge quicker due to fast casting. there is a furtur reason to use this atribute on signet heavy builds.

I think you'd better explain that note better. Mantra of Signets recharges a signet instantly. This does not go faster than that. Compairing to Mantra of Inscriptions was much more useful anyway as they are more similar, so why would you remove that not anyway? I thought I'd ask before I do it because perhaps I am missing something. — JediRogue

Although you can use Posture more often than Mantra of Signets, the mantra is still faster, because it's instant. I'm removing that note. Silver Sunlight

"Due to its lower recharge time this skill recharges signets faster than Mantra of Signets."? The note about Mantra of Inscriptions need to return too. That and this should be compaired because they are very similar. — JediRogue

Well that's certainly not how it reads. Let me see if I can fix it.— JediRogue

Oh wow I did not think that my tired brain would cause this much trouble. Sorry bout that. (course I couldnt think much at all then) 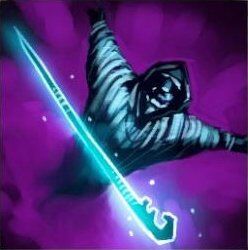 Woah...I always thought it was a hat and a wand XD -

The note seems to imply that this is actually useful in some situations, but I cannot think of any because as a primary Mesmer you can always sink 3-4 points into Inspiration regardless of your build; and you should be using some Inspiration Magic anyways for energy management. This skill becomes much more powerful at very high fast casting, but because Fast Casting inherently speeds up signets anyway...yeah.

I suppose if you had a build that only used like one signet, maybe it would be useful. But then there is still Mantra of Signets. Meh.

It's good for fighting Abaddon; give Norgu Cautery Signet.

Oh, good one. Too bad that's like the only place it has great synergy. :( I thought about death leveling pets and resurrecting with Signet of Return; I was doing that with high Fast Casting and Keystone Signet, but I suppose this would work as well.