Could anyone confirm, that at least Psion Tanglebranch and Scale Fleshrend are not in this area? I've been there for 6 times and the boss spawns were not random. The listed bosses in the Bosses section are there, furthermore a monk boss, but i can't remember his name.

where is Tree of Autumn?

The current map shows possible boss locations, but have edges of the area cut off (the portals etc.). Can we have a new map with all of the edges included as well? --Shin 14:22, 29 March 2007 (CDT)

Theres a palmtree about 3/4 underwater not far from the Black Curtian Portal, i thought this was kinda funny, lol. - Chrisworld 05:14, 12 November 2007 (UTC)

Not sure if this is an isolated issue or not, but since the new camp, I tried to vanquish the area, and upon entering it in Hard Mode, the counter and hardmode icon in the upper right of my screen shows complete, but the area is still infested with enemies, and it clearly isnt vanquished =\

They know, it'll be fixed on Monday. —Dr Ishmael

I was thinking about what I posted about the vanquishing tips earlier. I hope that they will in fact also be able to update the Frostfire Dryer junk in the portal... Should be very nice too. Btw, wherefor is that camp? (and btw, am restarted vanquishing for tips, next one is Bjora Marches.) --Jorre22225 04:26, April 3, 2010 (UTC) 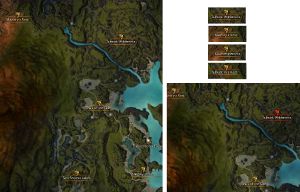 Funny thing is, my vanquishing icon now and then still shows up red (I've been Legendary Vanquisher since well before the introduction of War in Kryta). See the image (left is with gold, right bottom is how it shows up now and then). In fact, when it does appear correctly in gold, there seems to be a reddish hue around the helmet anyway, as if the gold icon is show on top of the red icon, which has a slight glow that extends beyond the gold icon (see the small images, although it may be my imagination, but determining the RGB color code shows increase in red and decrease blue). Nothing special, I just noticed it. Karya Foxstep 12:23, May 28, 2010 (UTC)

It's definitely not fixed even though they claim to have fixed it in the 6/3 patch. I just vanq'd this tonight, and it keeps changing from red to gold and back each time I open the M map.Pantsburgh 07:54, June 6, 2010 (UTC)

If you have any part of War In Kryta active, vanquishing may not end properly. This includes the daily bounty quests even if you've completed War In Kryta. Check your quest log before you attempt to vanquish this zone, and either complete or abandon all War In Kryta quests. --Triplehammer 18:24, 2 June 2011 (UTC)

To follow up, I entered Talmark with no WiK quests active, and found a normal zone with no Peacekeepers, etc, just the original Prophecies monsters. Hit 198-202 kills and thought I had a completely empty zone. Wandered the zone for most of an hour before I finally found two mintoaurs that had apparently been running around the entire zone. If you think you're bugged, just go to the middle area of the zone, just wait awhile and hopefully the lost minotaurs will come to you. --Triplehammer 21:06, 2 June 2011 (UTC)

And then Zehnchu did not recognize that I had vanquished the zone for the Zaishen vanquish quest, so there's a bug there. --Triplehammer 00:19, 3 June 2011 (UTC)