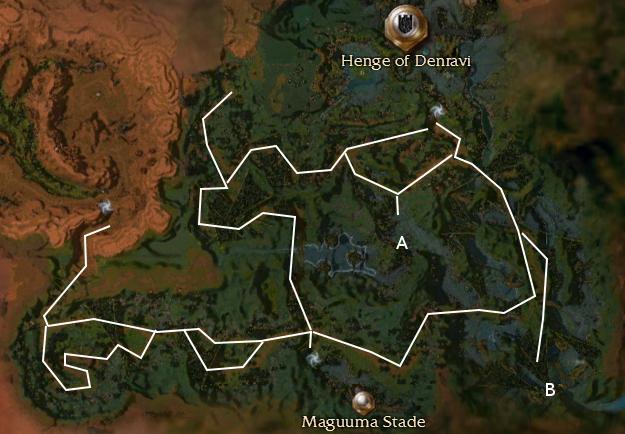 This is from memory so it might be a little off. At point A, you can descend into the riverbed/valley area and reach all of that; this also provides an alternate route to Old Joness (at point B). --EccentricFlower 09:52, 2 June 2006 (CDT)

Hard Mode : 198 monsters if you just don't follow the usual route to Old Joness (I mean the path you follow from Denravi, when doing the quest). That way, you avoid lots of spawns. The fastest path i found was starting from Denravi, then clear the northern area, go down to the Stade then clear the western area. Once down, head east but don't go further the first bridge, then come back to point 'A' on EccentricFlower's map. Go down the river and clear the way to Old Joness. Head north, to the collector and the material crafter. The last few trolls are westway. I found it quite easy to do with a MM, despite the scarabs using Verata's Gaze. If you can micromanage your MM, just equip him with Verata's Gaze too, and focus on the scarabs first. -- Duncan Idaho, 06:34, 7 May 2007 (GMT)

Does having the quest Defend Denravi lower the max number of foes in hard mode? I know it did in Mineral Springs as well as in North Kryta Province. It actually makes the area easier in hard mode because the Titans don't get that much more powerful in hard mode and besides lowering the max number of enemies, they also tend to kill the other monsters. If no one noes I will test it out tonight and update the vanquisher page accordingly.--Old Man Of Ascalon 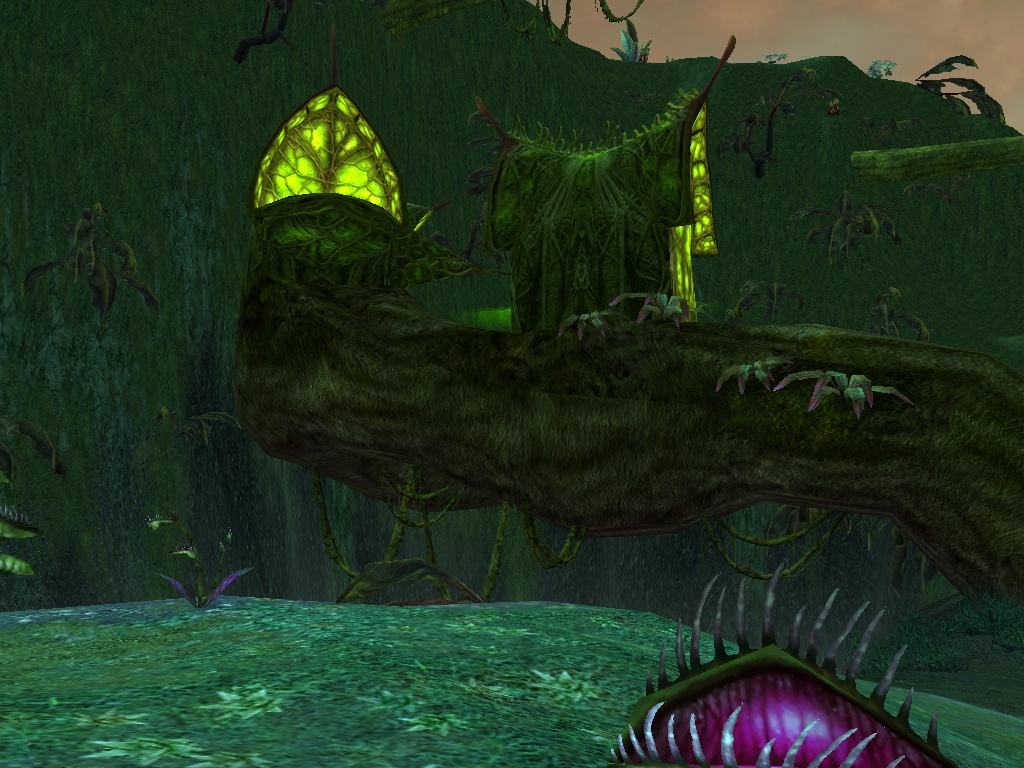 ^Looking at the image of the house with the side facing towards the point of view... does that look like Grenth maybe? It's extremely similar if not a picture of him... What could that mean? lol What is with these houses?!--Powersurge360 04:17, 22 January 2008 (UTC)

That is not any way similar looking to Grenth. It is just vines and roots placed in an ornately fashion. Why speculate about the house(s)? Has the thought of people living there in Tangle root, escaped your minds? Not everything has some special lore to go with it.

It certainly looks likes a person in a lordly fashion who looks vaguely like grenth's avatar or a bearded priest of some sort if you're not short-sighted. As for people, there's always crazy old hermits or isolated people in these places. Flechette 00:58, 23 January 2008 (UTC)

Yeah there are isolated hermits and junk, but why only put a random house here and not anywhere else. There's not much in the game that's just there to be there. Even the bleached bones in the desert usually have a brief journal entry or something. I thought maybe it was Joness's house or something, but he didn't seem to be hiding, as his son was killed by the Mantle. I don't know, maybe the developers put it in here just to make me ask why, lol. --Powersurge360 01:14, 23 January 2008 (UTC)

I'd always just assumed they were the leftover houses from the druids that used to live in the jungle, the ones mentioned in Henge of Denravi's Description.-Ezekiel 01:21, 23 January 2008 (UTC)

(Reset Indent) Are there houses like this anywhere else in the Jungle? Or are these the only two known (which means they are the only two in existence with all the cartographers running around)? It just seems weird to only have two houses here for the Druids, or Shining Blade or whatever, but not have them anywhere else. Also seems weird that they may exist for no reason at all, lol. Coincidently, there were an unusual amount of jungle trolls around the area where these were found. --Powersurge360 01:30, 23 January 2008 (UTC)

You're not thinking out of the square, if these houses exist and there were a reasonable amount more of druids, what stops you from believing that the places we can go to are the only ones that exist? There's alot of places that seem merely decoration such as the peaks in far shiverpeaks. The thought that other druids residentials are simply out of sight is not too hard to believe. Flechette 01:38, 23 January 2008 (UTC)

Very good point. Especially since the jungle grew over most of the druid meeting places and junk in their absence, why couldn't they have grown over the other houses and such? Sorry about being so bothersome, I'm just a lore freak, lol. --Powersurge360 01:42, 23 January 2008 (UTC)

Well, didn't see the dead houses you were talking about, but I did see some Shining Blade tents in one of the outposts, so these houses most definately do not belong to them. --Powersurge360 05:46, 23 January 2008 (UTC) 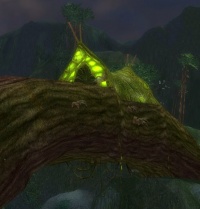 Yeah you're right, my mistake. I thought that this on the bridge at the wilds was on one of the dead bridges over at bloodstone fen, I hadn't been to maguuma in far too long it seems. -Ezekiel 06:08, 23 January 2008 (UTC)

Very, very nice. This pretty much rules out the possibility of it belonging to anyone/thing other than druids. Shining Blade have a different style of tent/house thing, too far away from Saul's exodus to belong to him, an apparent symbiotic bond to the branches, and I assume no giant mob of trolls in the area of this broken house. Thanks for helping me figure this out. --Powersurge360 06:20, 23 January 2008 (UTC)

My pleasure, do you happen to know anything about the ruins at this spot? It's the ones where the Ele Imp Boss spawns -Ezekiel 10:54, 23 January 2008 (UTC)

I'll check it out later, but the first thing that comes to mind, is that the poisonous swamps in that portion of Kryta was considered a holy land, not just to humans, but to their predecessors. The undead only relatively recently rose and poisoned the swamps and such, and the floors of building and such can be seen throughout the Black Curtain (where the reed stalkers are found comes to mind, also Rotscale's Door in nearby Majesty's Rest). It could be likely then, that these ruins are similar in origin, serving some unknown holy purpose for the human predecessors. --Powersurge360 12:59, 23 January 2008 (UTC)

Found like MANSION sized ones in Aurora Glade when I went there today to help some random people with the bonus. Suppose it credits the druid theory though, given the large number of druids in the area. — Powersurge360 Melancholia 06:26, 26 April 2008 (UTC)