I've heard from several reputable sources that the large statue in this area actually "falls" when you get close enough to it (thus causing the "bridge" you need to cross to get to the forgotten for your first 15 attribute point quest) ... can anyone confirm this? I always forget to look (or am too busy fending off random desert critters) to see it ... Geblah187 11:24, 19 November 2005 (UTC)

Yes and no. In my point of view, the statue has always been fallen. But from a distant look, is seems that the statue is up, a foggy mirage in my opinion. Porbably Anet did it on purpose. Its like an image poetry...and this little things make the game unique. :D And yes, the fallen statue allow you to pass to the other side, to do the 15 attributes quest. View Here

No it does not. Basically, the way the graphics engine works in the game is that everything in the game as a "low res" sprite and a close up 3-D render. So, If you're walking around Kryta and you see all those trees far away and those castles, they are not "rendered" all the way to the horizon. The game actually renders to, say, the radius of your radar map and then beyond that, it shows a 2-D sprite for the rest of the horizon.
For the statue, the far away sprite is the erect statue, but when you get close, the 3-D render is the broken one. So, it appears erect until you get close enough and then POOF it's a broken statue. You can test it. When I took the screen cap in the article, I kept edging forward and it would be crumbled and then edging back and it would be erect again.
This effect is repeated for any large human construction in the desert. --Karlos 16:20, 19 November 2005 (UTC)

I just repeated Karlos' test twice (by zoning out and back in). When you get close enough, the statue indeed becomes collapsed (yes exactly with the POOF effect - there is no animation) but when you get far away, it does not become erect again even at the maximum distance that the statue is (or the legs are, to be exact) still visible. Maybe they fixed this after Karlos took the caps. I think ANet's intention was that the statue is very unstable (what with the chipped left leg and all) and it actually collapses just as the travelling party gets near it. From afar, it serves as a landmark that leads to the 15ap quest and close, it serves as the bridge to the resolution. Brilliant. Not as romantic or mystical as the 'mirage' theory but brilliant nonetheless. 85.97.0.178 - that was me before I registered, BTW --Ishmaeel 20:59, 23 February 2006 (CST)

You are correct. The statue doesn't stand back up. I don't see how this is a matter of the thing collapsing (shouldn't there be sound or animation or something if that were the case, since you're looking right at it and it's just gone in the blink of an eye?). The mirage explanation makes sense, particularly because that's how mirages work: once you've figured out it's fake, you can look at the same scene again and not see the mirage, because your brain is interpreting things differently now. --130.58 22:03, 4 April 2006 (CDT)

Ya, makes sense this way too. I like this statue every which way. On the other hand, I don't remember any in-game "terrain animation" (as opposed to those that happen in cutscenes, such as the ascension mesa breaking open) so maybe the absence of effect and noise is a technicality. Can anyone remind me of a terrain-changing animation that happens while the players are active? --Ishmaeel 23:40, 4 April 2006 (CDT)

Yep. Nice one. Thanks for the reminder. I remember saying "whoa" when I saw that for the first time since terrain animation really is rare in GW but it's not really technically infeasible then. Mirage explanation seems much closer to my heart now. --Ishmaeel 02:19, 5 April 2006 (CDT)

Also there is a bonus where you set off the explosive, and the snow rolls out of the way (this is all while you are playing). The animation isn't amazing, but its also like nothing else in the game, meaning i guess they designed it for this one off use.

Well with factions and NF there seems to be alot more terrain animation so it could be that they didn't use it as much to start for whatever reason--Devils Apprentice 15:43, 8 April 2007 (CDT)

The statue actually rocks back and forth very slightly. Hard to see unless you're almost close enough for it to fall. I always wondered why there was no sound effect when it fell. Cantos 00:51, 28 June 2009 (UTC) 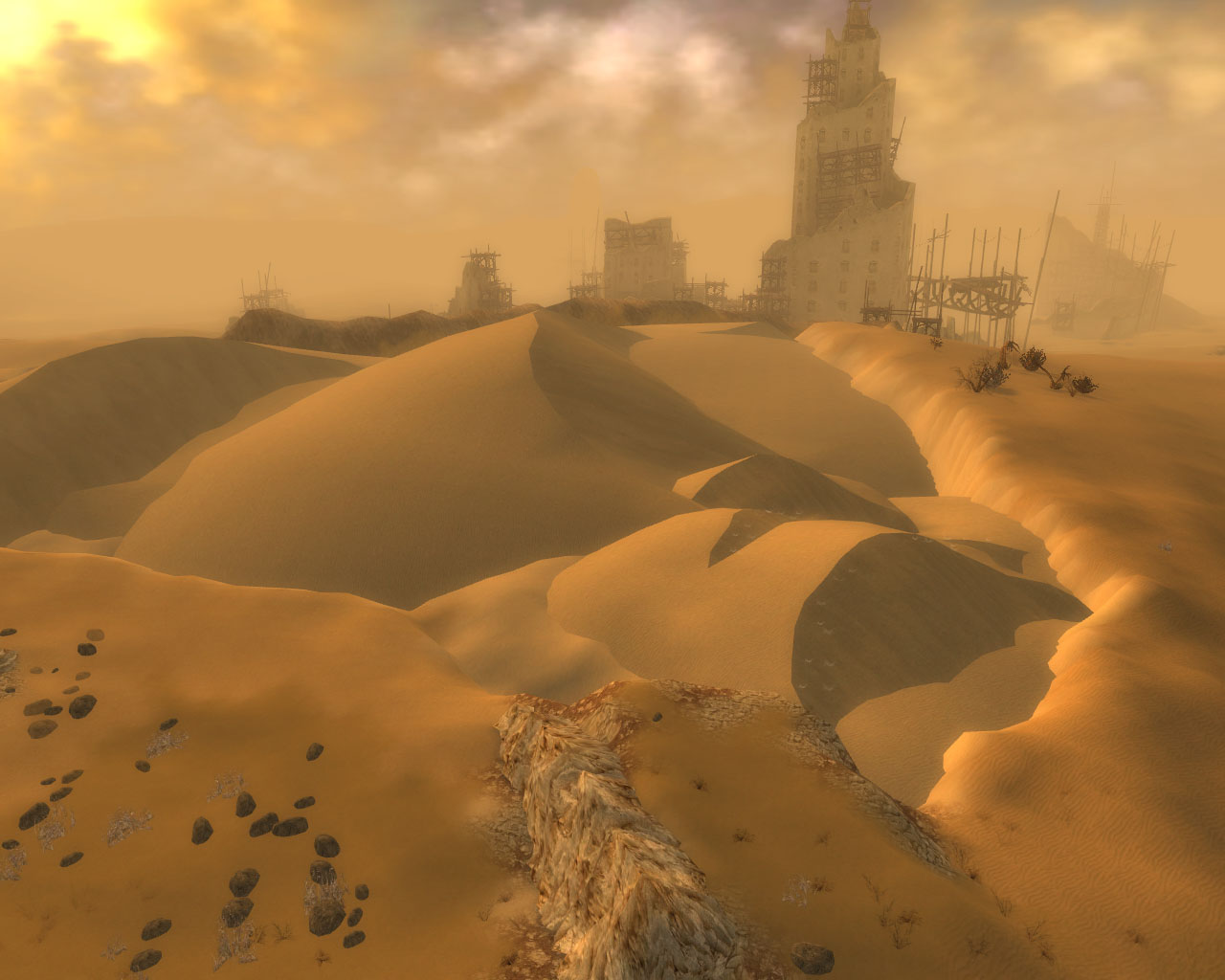 Just do it, I guess. 'Edit mercilessly' etc, if you genuinely believe it is better. If other people disagree, they will either revert or start a meaningful dialogue. Shandy 21:19, 23 February 2006 (CST)

I just found an NPC named "Forgotten Guardian" at the far south of Arid Sea. Dialogue: "This portal leads to the Desolation, a deadly wasteland shrouded in sulfur mists. You do not have the means to survive in such a place so I cannot grant you passage." Screenshots taken. --

Yeah, I found him earlier today. I'm guessing it's a portal to Nightfall, but I have Nightfall and couldn't get through. Whilst I haven't got to the Desolation yet, descriptions look like you get protected from it somehow (I guess not unlike Infusing to survive in later Tyrian areas). I suppose if you get this done then you will be able to pass through the portal. It certainly warrants further investigation. -Ellisthion 03:19, 30 October 2006 (CST)

Ok, anyone still looking at this, if you have control of the wurms, you can use that forgotten guardian to go from The Arid Sea to Crystal Overlook. There is also a portal to go back, except it looks like the portals in the desert, but it too has a Forgotten Guardian to talk to to teleport. Was gonna add this to the article but I noticed it was already there. --Mwpeck 18:09, 5 November 2006 (CST)

Damn, you beat me to it! I was almost there with my Ranger... cool, though... maybe an Elonian character who has not gone through Prophecies could use this to skip into the Crystal Desert... -Ellisthion 18:26, 5 November 2006 (CST)

Not sure, I talked to the Forgotten in the crystal outlook and he said something about him "sensing" I had some business to do in the arid sea. Not sure if you have to have been in the arid sea at one point, or only have access to prophecies. Maybe someone with an elonian character can test this out. --Mwpeck 19:10, 5 November 2006 (CST)

Tadjinar [talk] 19:34, 6 November 2006 (CST)
Text when talking to the Forgotten Guardian without visiting Crystal Desert first: "This portal leads to the sacred Crystal Desert of Tyria. I cannot allow you to pass unless you are familiar with its dangers." ...as if the Desolation isn't more dangerous than the Crystal Desert... So frustrating, you can even see the mirage statue from there. --

I believe by dangers he is refering to the sulforous waste which will kill you instantly without the proper means of protection (wurms)--Devils Apprentice 15:46, 8 April 2007 (CDT) 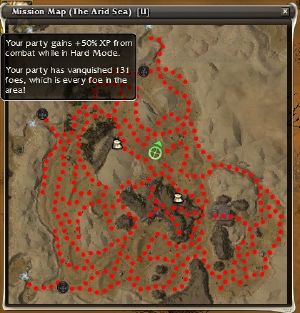 it varies by spawn, sometimes as much as 10% --Honorable Sarah

It is stated in the article that total exploration will give 1,3%, though I noticed it is more. I got 63,9% when I entered the area, and when I fully explored it I had 65,5%. Which means it will give 1,6% towards the explorer title.