The elite guards typically run up from behind your group. If you are moving quickly to try to get under 15 minutes, you may have missed the groups. --The Deathmonger 08:51, 30 November 2007 (UTC)

I got all 5. i bet one of two you missed were either-

1 - When you go up a short but steep hill to fight the first giants (i forget their name) and some awakened run around to your left, go to the edge of where they run across. some bodyguards will make their approach to your location
2 - When you get to choose 1 of 3 paths, choose the far right. just past the group is the trigger and they will come from somewhere towards the other groups. I managed to get all 3 discoveries with 3 seconds to spare for the time attack :P
if you want an ss of proof of no bug, lemme know. but for now, just trust me - Xav 20:05, 30 November 2007 (UTC)

isnt the phrase "Kryta will burn to the ground"? hehe, it was mentioned somewhere else. but, theyre charr, they are likely to say something like that. i would guess it has a hint of 300, but meh. Wouldve been cooler if Turai said "THIS IS ELONAAAAA!" - Xav 20:05, 30 November 2007 (UTC)

There is also a reference to the "All your base are belong to us" bit when the Awakened Troopers shout "Make your time" Xade Xavier 01:33, 1 December 2007 (UTC)

Yeah, when they all use it it makes me laugh. For a second i thought it was just a parody and the skill was useless the way they were using it. Seems not - "Make Your Time!" - they fill up their adrenaline quite nicely before they even throw their spears - Xav 02:57, 1 December 2007 (UTC)

Also if you were insterested, the term Make Your Time, i believe was popularized by The American Translation of ZeroWing. A NeS game. Heres a link of the video where it is said.http://s12.photobucket.com/albums/a212/sabuu01/?action=view&current=zerowingmov.flv It was even further popularized by a song and video taken and based on that same game. AYBABTU has reached near cult status in popularity. Heres a link of the song/video: http://www.youtube.com/watch?v=qItugh-fFgg have fun, youll probally get addicted to it. lol

I found the most effective thing to do is spam Heal Sig, D-Slash, and Giant Stomp. When health is really low or when it's recharged, use Endure Pain. There, happy? --Guild of Deals 02:30, 2 December 2007 (UTC)

Somewhat agree with you but you need to interrupt some of his skills as well, not just with giant stomp. Heal sig only if your interruption skills are not available as you will 'save' more of your life by interrupting Palawa than you will gain from the heal sig. Cronus 08:38, 2 December 2007 (UTC)

I never used interrupt. I did: Giant Stomp, For Great Justice, "For Elona!" whenever recharged, and otherwise spammed Dragon Slash. Used Healing Signet+Endure Pain when my health got really low, but Palawa is, quite frankly, a pushover...--MagickElf666 06:34, 2 December 2007 (UTC)

Oh I don't disagree that he is a pushover, some of the groups are harder than he is. Just keep whacking at him and he will die. The 15 minute deal is rather easy to get as well. For Elona is one of his better skills. Frenzy without the damage. I just want to get the Giant Stomp for my warrior :P

Heh. I find getting to Palawa much harder than actually beating him. He's a wuss. Just remember to heal and use ALL the skills given to you, and he will go down eventually, the player's skill just decides how long this "eventually" is. All you need to know is that you'd better have at least 300HP when your endure pain ends, or you're in for a little surprise. RoseOfKali

Talon Silvering says "For Aerie!" as one of his battle quotes. I think [["For Elona!"]] is a very generic reference, that shouldn't be in "Trivia" section. I think the only things that belong there are the OBVIOUS references, like the cinematics during "The Tengu Accords", and such. --MagickElf666 06:33, 2 December 2007 (UTC)

I think it's there, because of all the 300 references. But I also must agree it's rather generic. ---

It is generic enough that if it was the only possible 300 reference, it would be reasonable to doubt that it actually is. However, when there are a bunch of 300 references, all released together with the same game update, and this is also in the same update, it seems mind-bogglingly unlikely that it's not a 300 reference, generic or not. Also, the icon makes it bloody obvious that it is. --68.187.144.197 11:31, 3 December 2007 (UTC)

Can't do this with a low level character[edit source]

Hi I tried this with a low level dervish with starter armor and it proved really difficult. I have tried 10+ times to no avail. The main killer is Deathly Swarm which does over 160 damage (300+ when using healing signet!) Barrage from the giants dealt over 100 damage (250+ when using signet) I've done this mission with a max armor warrior and max armor ranger and they went through it like a breeze! I'm guessing the disguise does not modify your armor. Can anyone verify this? Togrias 04:00, 3 December 2007 (UTC)

It's most likely the level disparity, since the bonus mission isn't giving you any XP and is setting your health/armor to fixed levels, but probably isn't compensating for the bonus damage higher level monsters do to low level players. -Gildan Bladeborn 17:37, 5 December 2007 (UTC)

Didn't have the guts to put it on the main page, but this turned out pretty awesome. :D RoseOfKali 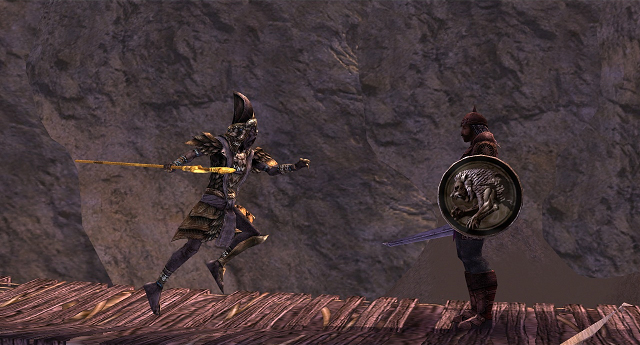 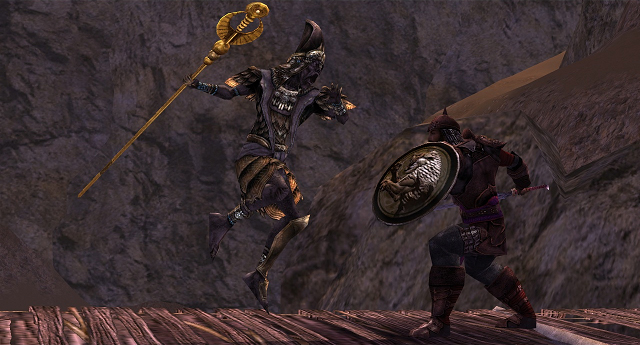 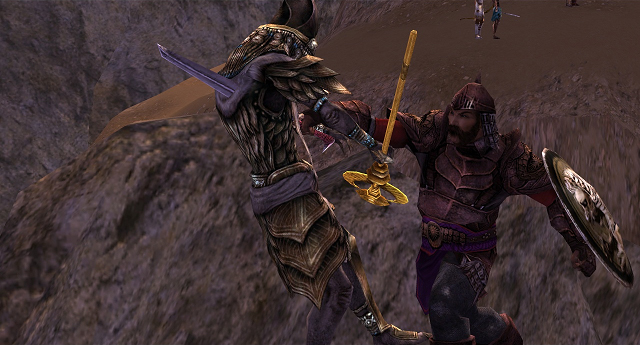 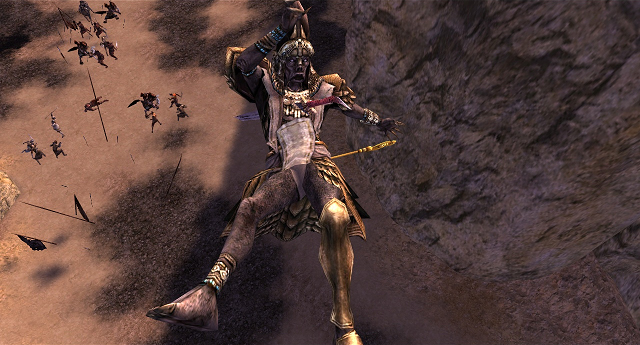 That's epic. Though I can never quite shake the feeling for saying "Palawa you idiot!" Just watching him trying to body slam Turai like that... :P

Yeah, I laughed the first time I saw that. ^_^ Guess he was desperate... RoseOfKali

And he still has the sword stuck in him. RoseOfKali

This is what it said when I was close to the bridge with Palawa Joko on my second run: "Historical Debate: Could Turai have routed Palawa Joko's Army in less than 15 minutes?" Anyone else get this? COLDshiver 00:19, 8 December 2007 (UTC)

Any time you get a "Historical Debate" note, it means you failed a discovery, and it tries to tell you which one. Some discoveries don't have such a note, because they cannot be failed until you complete the mission. RoseOfKali

It did get reverted, and I think I agree with it. There are no visual references from the historical battle itself, and many of the elements in this mission refer specifically to the movie, with the amount of detail that would not be available historically. Therefore, it is highly unlikely that Anet staff went and read some history books about Spartans. They watched the movie, took out the parts that looked worthy of putting in the game, and implemented them. This is consistent with their history of pop culture references, not as much historical ones.RoseOfKali

Yes, but ii still "looks like the Battle of Thermopylae, as depicted by the movie 300." I believe that is a better way to phrase it. It maintains both the historical reference AND the movie reference. TK Hawkins.

Did anyone call it Thermopylae in the movie? I thought it was something else, more pronounceable and more... awesomely western? RoseOfKali

Did everybody miss the All your base reference? When i aggroed the Awakened Troopers, they all shouted "Make your time" (the actual line being "You have no chance to survive make your time."). I don't see it in the trivia section, and i'm completely clueless when it comes to wikiing (hope i did this right >.>) - no log-in wiki noob

They were using "Make Your Time!". It's a skill.

In response to Rose of Kali--yeah, I'm pretty sure they called it by its name at least once initially, but commonly referred to it as "the Hot Gates" thereafter.Vehemoth 03:28, 2 April 2008 (UTC)

/sigh, too bad we can't have a skill that actually bashes your foe with the shield like in the cutscene. 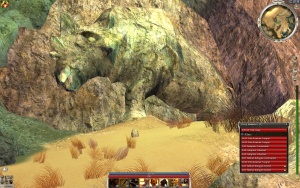 OMFG there is a picture of this in 3-d rendering somewhere on the wiki! And no one could every figure out what it was! Thank you!--Łô√ë