Thats why i hate this area: i had to explore a little bit at the end, with signet of stamina on me, and attacked a warthog....it killed me.... aaargh bye Legendary cartographer 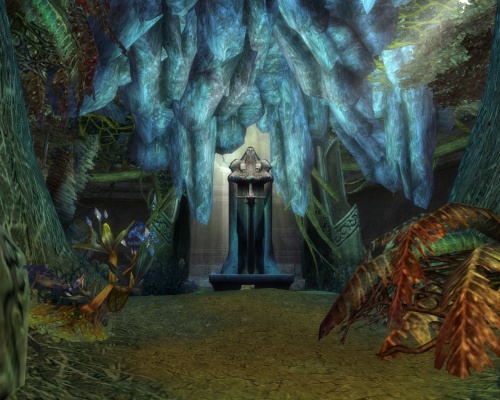 Wow. That's pretty. I've always wondered, can you reach Fissue of Woe from here like you can get to the UW with that statue in Lonar's Pass?

I checked it yesterday, while attempting to run through the area. Just offers enchantments (Holy Blessing or something (+3 health gen, +25 max health) & something else I didn't check) for cash. So now you have someone who checked it within memory to verify. Course, this is like, a month after the fact. d: ... Although that statue looks even more awesome when we have favor. XD --Tinarto 16:03, 28 April 2006 (CDT)

You can have more than 6 party members. But it's quite unrealistic to have 8 there. ;) --

Just checked the shrine and its similar to Majesty's rest, it offers To courage and To conquest...

Another rider-ridden area... Great... >_< Mamnoon Lagoon was bad enough, and that place is TINY... RoseOfKali

Bah. Had little trouble with the riders in Mamnoon and even less here. The Life Pods were a bigger nuisance. Mesmers excel at interrupts and suck at AoE, so a Minion Master to provide extra targets and a SF ele or two (who care little about interrupts) do a fine job of stemming the tide. :) SarielV 09:51, 6 May 2008 (UTC)

All you guys REALLY don't have to put a note here explaining lowering the minimum or raising the maximum (within reason, if it's only a few off it's believable, if it's a ton of a difference a screen is needed) --Gimmethegepgun 23:07, 23 August 2008 (UTC)

why douse the notes about the bosses explain maelstrom like it was a elite skill? :s

Because it's a cool and popular skill and is otherwise not available until later in the game. At this point in the game, it pretty much acts as an elite, as you don't see true elites until the Crystal Desert. RoseOfKali