In the outpost> — Skuld

The pic is large enough and we never lost it so i really don't know. Lol you try convincing a whole town not to do anything so we can put it on guildwiki ;) Grtz --Gaia

Hmm, could be The Darkness? Pure speculation of course. -User:PanSola (talk to the

I'd say it's a pretty sound hypothesis.

Yes, i saw him trying to cast MS, but he was interrupted before the end :)

We finally got him?[edit source]

Yes, currently it's just tying the names together. We don't have a report or screenshot of anybody having fought or defeated the Fury yet. But there is some pretty strong indication. We know that the creatures who attacked during the Dragon Festival were servants of Abaddon. How likely is it that there are two different creatures with the same name, both demon leaders, both servants of Abaddon? --

Weak one at that too. Somewhat of a disappointment, to be honest. We pre-protted the entire party like crazy before getting in this guy's aggro range. =\ --Dirigible 07:06, 9 December 2006 (CST)

Originally a follower of Dhuum he was sent to aid Abaddon in bringing darkness to the world... where is the source for this? the forgotten in the gate of anguish says that the fury is an ancient spirit, incarcerated in the realm of torment by the forgotten along with many margonites. he says the followers of dhuum rally under the fury, but where does it say the fury was a follower of dhuum before abaddon's fall? --User:Aptaleon Griefhaven

Disregarding the whole Riders of Dhuum thing, here's the actual text the Relkyss says about the Fury (I have all the others if needed)... Don't know where you got he was "incarcerated" by the Forgotten. In fact, the only prisoners he talks about are the souls being prisoners to the Margonites, not the other way around: 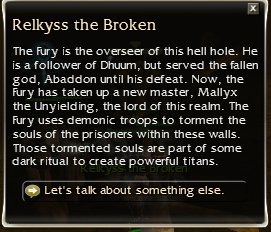 "Before Abaddon regained power and the Margonites overwhelmed us, the Foundry detained particularly troublesome Margonite prisoners. The foulest of those incarcerated was an ancient demonic spirit known as "The Fury." When it broke free of its shackles, the Fury sundered its surroundings, only to reassemble them to mimic the twisted visions trapped inside its cruel mind."

I'd say this guy is a reference to the boss "The Fury" in Metal Gear Solid 3: Snake Eater. It would make sense since The Fury in MGS3 is a flamethrower soldier, and this guy here is a fire elementalist. Should I add it?

I removed the refrence as its extremly unlikely this is the reason , can people stop posting "possible refrences" as facts

Aye, so I can see how my health and energy are doing without taking my eyes off the enemy and his skills for even a second. Large bars = more visible in peripheral vision. :) --Dirigible 11:38, 31 March 2007 (CDT)

Is his elite capable? if so, DD is not Factions only. --Sigma

So I take it that means you cant capture his two prophecies skills as well?--Thelordofblah 00:22, 2 February 2007 (CST)

I'm quite certain it's not a boss, just a "normal" monster that happens to have lore attached and to drop a green. I haven't actually brought a capsig, but it neither gives a morale boost nor leaves the boss corpse marker. IMHO that should be good enough, unless someone has actually brought one. I'm not to keen on trying to convince a DoA group that a capsig is really necessary ;) 134.130.4.46 21:01, 19 June 2007 (CDT)

He can drop more than one Green. Just wanted to put that on record.

I think all bosses can, I've heard of people getting multiple drops of the same item from a single boss — Skuld 05:30, 1 February 2007 (CST)

I updated Description, so it says that he appeared in both Dragon Festivals, both 2006 and 2007 editions. — Abedeus

Is the picture from the Dragon Festival '07 really necessary? It doesn't do much for me. Silly canthan dude with a bad mask on, doesn't really contribute to the page at all and just is extra kb's to download. --Dragonaxe 09:44, 19 August 2007 (CDT)

Could the Fury possibly be a reference to the Greek/Roman spirits of vengeance? It might be a bit of a stretch, but it seems feasible. RavynousHunter 01:32, 9 September 2007 (CDT)

A number of people involved in the French revolution took names like this... The Vengeance from A Tale of Two Cities (Charles Dickens) comes to mind. - Leopoldus von Habsburg-Lorraine 23:19, 1 December 2007 (UTC)