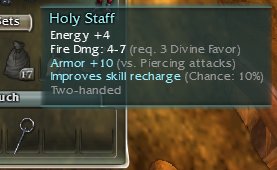 Where did you get that same-look-as-Yakslapper staff? I like collecting rare looking weapons/items

Looks like it's a quest reward or collector item, since you can see the mods but there's no merchant price on it. Perhaps Skuld can say. --Fyren 17:39, 2 January 2006 (UTC)

I disagree with the removal of the reference to Kepkhet's Refuge. As the Yakslapper is a popular choice for anyone looking for the mod Enchantments last 20% longer, it's good to show alternatives. That way, if they're buying instead of farming it, they'll know an option exists that may cost less. Although, it may be even better to add a list on the enchantment article to show a list of all unique weapons with this mod. --161.88.255.140 11:57, 17 May 2006 (CDT)

I disagree with them being "simliar" weapons. However I don't see a problem of compiling a list of unique weapons with the Enchant +20% mod and link to it from this article as "related" weapons. -PanSola, Table of The Lyssa Advocacy Front (sing) 12:01, 17 May 2006 (CDT)

Well, they're both 5nrg, 20ench, 20HSR Protection staves requiring Divine Favor. The only difference is 20 Deep Wound reduction vs 20HCT Protection (and skin). I can't see how that's not similar. See also Talk:Kepkhet's Refuge#Comparison with the 'Slapper. There should be a reference like the one from Kepkhet's Refuge to here, IMHO. 134.130.4.46 12:05, 8 August 2006 (CDT)

There's a monty python reference in this one, but I can't remember what sketch aor what the sketch was about. >=T

How much are these worth? and if someone has one, pm me at mitch spiritslayer I want oneMitch Spiritslayer 01:23, 11 March 2008 (UTC)

Srry, we don't keep track of prices here, as it would be too easily abused. Try Guild Wars Guru or a similar website instead.--

This belongs in Category: Unreplicable Unique Items because it has a condition-reducing inscription, which can only go on offhands.

this weapon makes me lol.