Talk:Then and Now, Here and There

Can someone confirm that this is Tyrian born only? I have the tapestry shred from another character on my Canthan, I need to know if I could do this. --Joseph Leito

I have an Elonian born character, who has the Tapestry Shred, the Broken Flute AND Gwen's Broken Flute, as well as a Red Iris Flower and the Preserved Red Iris Flower. I have already done the Fire and Pain quest, but I can not get this quest. -Lefick

Buy it from someone, then, and stop complaining.

I tried putting in the full dialogue for this quest, but the time limit cut me off on most of them. Hope someone can dig up the rest of it. TaCktiX 15:33, 9 September 2007 (CDT)

Just did it. Walk in the park. Not sure about Gwen skills. Saw Anguish and Reaper's Mark. Not much else. Was mostly C-Spacing through it with another human. Bonder and HB humans, then SS, Derv tank (no microing), and Gwen as... minion master xD. Recommend you take a Deny Hexes / strong hex removal and a proper gwen if you do go though. Completed with 275 kills; far below the minimum without the quest. --BlueNovember 15:13, 14 September 2007 (CDT)

It's definitely not a walk in the park if you start from Nolani in hard mode... The charrs are still using powerful skills like Power Block.

Abandoning quest after getting flute?[edit source]

I'm just wondering if it's possible to abandon the quest after kneeling and getting the flute in Old Ascalon. Will Gwen give you the quest again uf you give her another tapestry shred? Thecount 12:34, 28 October 2007 (UTC)

Ok, i found out that as long as you have the quest and you kneel in the spot where all the pigs were, you don't even need to do anything else, but if you kneel you automatically get the green.--

While doing this with my BM after the first phase Sardelac didn't show up as a mappable location - it simply wasn't on the map! 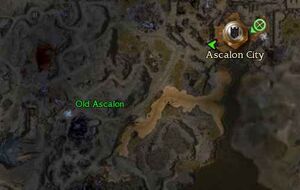 Sardelac missing from the map!

I presume you have entered Sardelac before on that character?
If so; that's odd. Never seen anything like that myself. ---

That could simply be it, its possible. Though as a cartographer down to my bones... Maybe Gron Fierceclaw was actually talking to me when he said, "You missed this one the first time through. You're getting sloppy." Thalestis 13:09, 25 June 2009 (UTC)