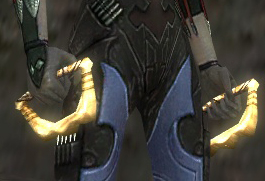 A bit of trivia that could be added: the name "Thunderfist" may come from the character known as Corin Thunderfist from C.S. Lewis's The Chronicles of Narnia. Corin received the surname via his proficiency at boxing. --Ebonywolf21

is it possible to add adrenalin + inscription? and will it work during boxing?

I dont think it favours the class as the damage you do is set according to the skills u use. I believe however that daggers were the only 2 handed weapon that would fit the genre of brass knuckles, and decided to make it so u could use it as an assassin. Im not complaining as I kinda like the skin, and it gives my sin heroes a dagger set 2 use. Luminarus 09:06, 25 August 2007 (CDT)

Niftyness... you can't salvage this item normally, but if you stick a modifier on it, it gives you the option to salvage the modifier off. (You don't get the normal "Salvage for crafting materials" option.) I've currently got myself a sweet set of Thunterfist's Brass Knuckles of Fortitude. I'm surprised they didn't make them do Blunt damage though, seems like a no-brainer... --

So they can't be destroyed when salvaging? --Sair

I haven't actually salvaged anything off, so I don't know. And I'm not quite sure if I want to risk it with my only pair, currently. --

Well yes, that's why I was asking first ;p --Sair

I highly recommend a Furious mod on these, as it helps build up the other boxing skills faster. Works great for me. ~ J.Kougar

Fortitude doesn't matter in the tournament, because your health is always set to 500 no matter what (that overrides any health bonuses or minuses). And +armor won't matter against the brawling skills. Suffix mod doesn't really matter at all, basically (not for boxing at least). --

hmm, guess it all depends. I think your armor might get reset while brawling too, otherwise caster classes would be at a disadvantage; we can test it out when the game's released (equip a weapon with no armor boost, then switch to a weapon with an armor boost and see if that damage changes). Sundering might be worth testing too, even, and I already know Vampiric works well (guildmate didn't know he needed to use the Knuckles, so he just beat everyone using a vampiric scythe). --

Armor doesn't get reset, I took significantly more damage with my rit in the extravaganza than I did with my warrior.

Is it just me or does it seem wrong that these are slashing instead of bashing damage? It just doesn't make sense lol. I guess they didn't want to give sins the ability to do bashing damage or something.

You mean Blunt? Yeah, I was complaining about that the moment I got them. Warriors get a Blunt sword, why not 'Sins? --

The worst part of all I think is that, because they do "slashing" damage, they make the slashing sound when you hit people. It's very.. disillusioning. I have to wonder why they changed the damage type at all instead of just leaving it as piercing if it couldn't be blunt 24.247.248.93 20:57, May 20, 2010 (UTC)

i am doing only 99 damage with a vampiric(3/-1) Vengance is mine of dagger mastery in a uppercut with dagger mastery 12 with my monk....i also recommend a sundering or furius prefix...haven't tested the Brawlsoverbrain [crlshn]

So it's proven that furious works? What about zealous and sundering? Has anyone tested? Zeek Aran 18:06, 17 September 2007 (CDT)

has anyone ever used elemental mods (ebon, fiery, shocking,icy) in brawling? Zero kyos

This item is currently listed as a unique item, probably because of it's name, but It is gold and moddable. Any thoughts on whether it deserves to be listed as unique? I personally think it should be taken out of the EotN Uniques list. Bo Fairfield AMP 10:08, 23 September 2007 (CDT)

I think this is more of a "Special" category... we don't list weapons like the Tengu Daggers or Destroyer Daggers as unique, even though they're gained through special means and don't drop. --

Since neither The Bison Cup nor Zehtuka's Horn are listed as Uniques, I don't see why Thunderfist's should be either.

Replacement if you lose it?[edit source]

You can try to talk to Leroy Stoneking, from who you got them in the first place. Otherwise, you can always trade em with players, or get another goon to finish the quests. Arnout aka The Emperors Angel 08:52, 19 August 2011 (UTC)

Nope, these are a one-time quest reward per character, and there is no equivalent. But like Arnout said, you can always complete the quest with other characters. —Dr Ishmael