Can the fortitude mod be replaced with a diff one? RoseOfKali

Well, now I do have it, and it clips with female necromancers in general... Goes through the thigh in the relaxed standing position, kind of like the Pronged Fan. Such a stupid mistake on Anet's part, I mean, how hard can it be to tilt it outwards? Oh, well. I still like it, matches my armor. ^_^; I'll post a screenie for anyone curious. RoseOfKali 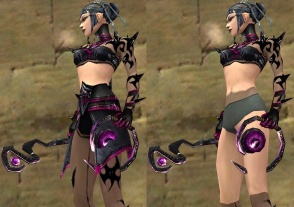 i'm considering getting one of these for my male ele but i DO NOT want it if it clips with his leg/armor that bad. some small level of clipping is fine, but not that. can any1 find some1 who has one for a male ele and post a pic?Akbaroth 05:24, 1 August 2009 (UTC)

Female Ele can also be used, just preview an Extreme Makeover when wielding this. Unfortunately, I don't have one to preview for ele, the one above is customized to my necro. RoseOfKali

Unfortunatly, a lot of weapons and the like clipp. It cannot be helped, unfortunatly. Arnout aka The Emperors Angel 16:09, 25 May 2011 (UTC)