Karlos: (reshuffled, separated present plot from history.. I think it's much better this way)

Yeah. That looks much better. It was getting a little heavy there. (Although I noticed you took out the question about how the Margonites, etc. tried to ascend before the Elonians built the Temple of Ascension only ~200 years ago -- that's 600 years between the Flameseeker Prophecies and when the Temple was built. Perhaps the Throne is a much older structure and the Temple was built around it?) --Tometheus 06:29, 27 October 2005 (EST)

If the article says He was a great warrior, and LINKS to the warrior article, then the use of the word "warrior" is not just "one who fights wars", but rather, the specific GW profession of Warrior. Plus he weilds a sword in the screen shot, so I vote to change his profession to Warrior (makes more sense than Glint being a ranger IMHO). -PanSola 04:54, 18 November 2005 (UTC)

I don't agree. He WAS a warrior in life, now he could be a vegetable, we don't know. He uses a bow all the time unless foes come near him (I know this is to protect his sorry butt). Nope. The only skill he uses is Claim Resource which implies his profession is a Republican. :) --Karlos 08:14, 18 November 2005 (UTC)

In which case, the context of "warrior" in "warrior in life" isn't really the GW profession "Warrior", I would argue, and linking to the profession seems to be treating the word out of context. -PanSola 09:54, 18 November 2005 (UTC)

Are there warriors in GW who are different than that warrior profession? What is the basis for this assumption? The warriors in the Fissure of Woe of the eternal army still use griffon's sweep and healing signet. :) There would have to be a good reason for us to begin to assume that there are "warriors" in the game other than warriors. --Karlos 11:01, 18 November 2005 (UTC)

Actually... In Thirsty River, he also uses Cyclone Axe, even though he wields a sword/bow. (I have a screenshot of him using Cyclone Axe while using the bow if anyone's interested.) --Tometheus 22:35, 19 November 2005 (UTC)

I am interested. In two things, the picture, and whether or not it is recent. I have never seen him use any fighting skills over the course of the past 5 months. --Karlos 02:15, 20 November 2005 (UTC)

I too have seen him use Cyclone Axe, not only in the Tombs, but also in Dunes of Despair and Thirsty River, though I have never seen him use it while he has the eternal bow equipped -- only when he switches to the sword. Don't have a screenshot handy, but I can try to take one if you remain doubtful. — Stabber (talk) 23:57, 28 November 2005 (UTC)

Sorry for the delay, I took a month off to study for graduate exams then went on vacation. I'm just now getting back in the game. Here's the promised screenshot.. with the caveat that the shot is likely due to delay with my slow computer / network lag / whatever... but as I watched, he switched to bow then did the cyclone axe, but in game logic, he probably switched to bow after doing the cyclone axe. (However, using cyclone axe while wielding a sword is still 'not right'.) I saw him do it several times, which is why I took the 'cap. (The attacker was behind us and everyone had moved forward when the screenshot was taken. I had to drag him deep into a group to get him to switch to sword and start using Cyclone Axe.)
Actually, looking at file dates, I took this shot on 2006.11.20 right after Karlos asked about the date, so that goes to answering the second question. I also have an older one, which was the one I originally referred to. --Tometheus 17:34, 12 February 2006 (CST) 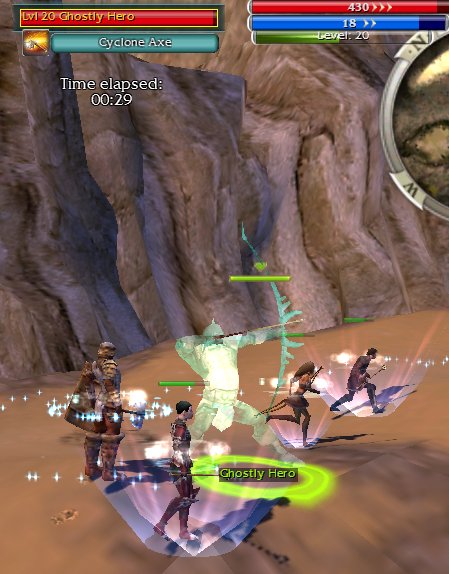 The Guild Lord and Ghostly Hero also now carry axes instead of swords, to justify their use of the skill Cyclone Axe. Game updates/20060323

The ones in the desert still use swords. Just checked last week. I think the update only affected the PvP ones. -User:PanSola (talk to the

I may be somewhat late to the party, but what's the justification for the Ranger profession? Warriors can easily wield Bows, too.PurpleXVI 15:25, 5 October 2007 (UTC)

Turai Ossa's decendent lead the army of Kourna, and Kourna borders on the Crystal Desert. Hmm, maybe C3 will have a Kourna = Good guys and Vabbi = Bad guys split? (since Palowa Joko was from Vabbi too) -User:PanSola (talk to the

Nope, Vabbi, Kourna and Istan is like Kryta, Ascalon and Shiverpeaks. Just locales and flavors. The bad guy is going be something supernatural. --Karlos 22:46, 20 September 2006 (CDT)

Yeah, well, I wrote the above before we found out that the scourge of vabbi didn't come from Vabbi... d-: -User:PanSola (talk to the

Could it possibly be that Turai Ossa is another Tales of Symphonia reference ? Known references are the skill Meteor Storm, the Dirk NPC in Pre-Searing, Kratos and Lloyd the merchants in Cantha, and Kratos the Foul (Mursaat Boss). And now I've noticed that Turai Ossa sounds like the Japanese way of pronouncing "Trail (of) Ossa", the name of a location of significant storyline importance in Namco's game. What do you think ? SmegEd 04:26, 22 August 2006 (CDT)

Wouldn't "Trail" turn into something like "Tsureiru" in Japanese? That to me is quite a stretch compared to "Turai". -User:PanSola (talk to the

Nah, wouldn't it be be 'tu-re-ru', pronounced roughly 'too-ray-ru' for those who don't know japanese pronunciation reading this, as there are special katakana combinations for sounds that are technically possible in japanese but that just don't pop up in the language proper? Regardless, Turai katakana-ized would be 'tu-ra-i' which is an absolutely entirely different pronunciation in Japanese-- something akin to saying 'are' and 'alp' have similar pronunciations in English. :). Sorry, SmegEd, I think you're looking at coincidence at absolute bese. Neongrey 01:40, 14 June 2007 (CDT) 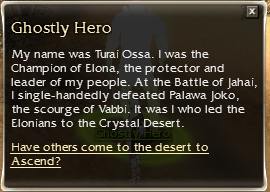 I agree with Karlos, and I thought we totally had this discussion and sorted it out a year ago o_O""" -User:PanSola (talk to the

You're right, I can't believe I forgot that bit of General Mendoza's pre-Dunes of Despair monologue. I was the one who transcribed that monologue a week earlier. -- Gordon Ecker 02:49, 17 October 2006 (CDT)

Why is he a warrior if his Aura is blue? O.0SigmA

The blue aura was a bug. (Or a testing 'feature' to see if the new method of making auras worked.) For a while all NPCs in mission outposts had that aura. (Before that I never saw auras on bosses. While the NPCs had the blue aura, I could see it, but still not on bosses. After that, I could see it on bosses, which is why I think it was basically a test to see if the new aura method would work. See my talk page for a discussion on the topic when the picture was first posted. --Tometheus 10:29, 6 February 2007 (CST) 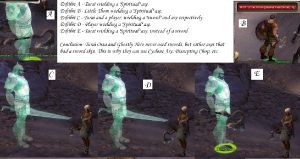 Yeh, it's an axe, not a sword. There's already a note on the page of Ghostly Hero, but no corresponding image or proof to back up the claim. So here it is! Images taken while in Elona Reach...

Little Thom, a known user of axes, is included just for absolutely conclusive evidence. Not that it's needed, but meh. Thouroughness killed the cat. ;)

After reading the stuff on the picture, I saw that Distracting Blow was listed as "if it weren't an axe, he couldn't use "Distracting Blow", yet DB is a MELEE skill and not an AXE ATTACK. Just a note for the image poster...

No!!! I'll make sure to take the screenshot after a partywipe. -User:PanSola (talk to the

Now that it's here...[edit source]

It might be time to change it back to being a sword as it is called "Turai's Sword" and the skill was renamed for the bonus mission pack to "Whirlwind Attack"Zerabp 09:27, 1 December 2007 (UTC)

Actually, Whirlwind Attack is a Sunspear Skill, and it's unchanged. I propose adding the skills availdble during the mission:

During "The Battle of Jahai"

Kinda disappointing that this guy's pretty much an Elonian demi-god, and then he runs away and dies from heat and starvation and fatigue and whatever... sucks to be him

He was killed by the forgotten at the dunes of despair i think.

i jsut noticed this but he talks about freeing vabbi and elona and killing palawa joko in like hte amnoo oasis, but was that there b4 nightfall? i cant see it being there before it..

If my memory serves me right, then yes it was. They might've built the storyline of Nightfall off of what was already said from Prophecies.--

I don't remember seeing the "Palawa Joko" text the first time I played through the game, but I do remember looking up the Margonites reference in Turai's Thirsty River dialogue before NF came out, to confirm a spoiler. Its presence from the very beginning would make sense, since ANet has stated that the same dev team worked on both Prophecies and Nightfall Shyft 02:18, 13 February 2008 (UTC)

The issue of PC Gamer that covered Nightfall confirmed that Jeff Grubb (pretty sure it was him) constructed the main story of Nightfall around that meager sliver of text regarding Joko and the Margonites. SarielV 04:52, 2 March 2008 (UTC)

I can confirm that it was there ever since/close to when GW was first released, I clearly remember it since I haven't touched proph (most of proph, at least) since I finished it in Nov 2005. Flechette 06:04, 2 March 2008 (UTC)