Names of Items in lists rules

While this is a valiant attempt, most of this is common sense. Users that are not active or making one-shot posts usually follow by example on the article page or place what they think is best and others come along and clean it up. Your rules seem to be aimed at an audience that will most likely not even check the talk page before adding a name, nor check it afterwards. Not saying its the wrong thing to do, if one person sees it and learned something from it, kudos. But in all honesty, one sweep through the list and a user can format it correctly. Still, a pretty good assessment of how we format the unique items list. — Gares 10:34, 28 October 2006 (CDT)

Ok, nightfall released. Suggest screenshots as proof of greens and to protect against spam (mostly the second one). --Mgrinshpon 06:47, 27 October 2006 (CDT) 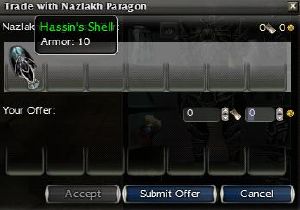 Please make that page yourself.. not quite a wiki genius... -

Check again.. you've made the page of the Shield i did it of the boss.. -

I agree w/Gares. If there are questions/disagreements about an item's stats, then we should get a stats pic for the talk page to settle the argument. Stats images should stay out of the item pages. --Rainith 13:22, 27 October 2006 (CDT)

Well, I made it basically into what it should look like except the dervish box is off. Someone will just have to fix it, I admit, I'm no wiki genius. --Mgrinshpon 13:05, 27 October 2006 (CDT)

Have found a green drop axe

Dropped by Riseh the Harmless

Here's the bosses that don't have greens listed for them yet, taken from skills by capture location (Nightfall), and therefore missing the Istan bosses. Mission-specific bosses are marked listed separately, and are suspected to either have no green item or another boss's green item because that was the case in Factions. Quest-specific bosses are were also omitted (feel free to add them, there's a good chance some of them are alternate sources for other bosses' greens). Hopefully this'll be helpful for the upcoming triple green weekend. -- Gordon Ecker 00:18, 15 November 2006 (CST) (edited 18:21, 21 November 2006 (CST))

And now the Acolytes do drop greens. We've found the greens for all the non-quest, non-mission bosses, and it's likely that if any of the quest or mission bosses dropped greens someone would've found one already, so it appears that we have everything. -- Gordon Ecker 05:17, 16 February 2007 (CST)

Er, I just added the links to poin to the right pages and I discovered that there are TWO Sehlon pages.

Unfortunately, the information for her unique scythe Sehlon's Vow links to the WRONG page. Can someone make an executive decision which page is better, and supplant the Green information therein? (Sorry, ate a dictionary whilst bored>) --Snograt 18:45, 19 November 2006 (CST)

Yatendi Canyons is listed in the maps as being part of Kourna, but all of the greens dropped in that zone are under the Vabbi section. Should this be corrected?--Sykoone 21:59, 22 November 2006 (CST)

Yatendi Canyons is part of Vabbi. It gets included in the Kourna maps because of Turai's Procession. Locations (Nightfall) has the correct information. -- Gordon Ecker 22:18, 22 November 2006 (CST)

However the Kourna and Vabbi pages had incorrect information. This has been fixed. -- Gordon Ecker 22:43, 22 November 2006 (CST)

This is based on the assumption that the four sections and the elite mission itself each have 1 green per profession in addition to any greens from bosses. -- Gordon Ecker 06:52, 9 December 2006 (CST)

it looks like we're just missing 1 ele 10/10 wand for certain, and im guessing another pair of mallyx daggers. its also possible that there is another bow floating around somewhere down there, and its hard to tell whether there will be another scythe or spear, but i think its about finished. —

looking into it further, id bet money that the ele wand is going to drop from the fury in the foundry. —

I suspect we're only missing a flatbow, a shortbow, a hornbow and mallyx's other set of daggers, although the torq'qua list is suspiciously short. -- Gordon Ecker 21:46, 16 January 2007 (CST)

And no new greens have been found in over a month. I guess that's all of them, although it seems odd that Mallyx only drops one Assassin green and there's no Flatbow, Hornbow or Shortbow. There's also still the question of which Stygian Lords drop which Paragon greens. -- Gordon Ecker 20:59, 18 March 2007 (CDT)