I don't know, but I can safely say this is one of the ugliest shields I've ever seen. Even a Defender looks better, and those are rectangle shaped. Entropy 03:21, 9 January 2007 (CST) 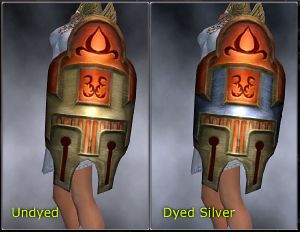 Undyed and dyed
I like these shields, esp. it's colors. There are ugly shields for paragon like this large ugly blue'ish one (dont the the name). Whatever. With the "new" dye preview, why not bring a picture for comparing in the items descriptions (in general, not just here)? Could look like this --Birchwooda Treehug 18:40, 27 February 2007 (CST)

It looks like a Bastion (hense the name). "A bastion is a structure projecting outward from the main enclosure of a fortification, situated in both corners of a straight wall". The "keyholes" are, I think, the slots in the Bastion wall for firing arrows out of. IMO it's looks cool. Each to their own. Bezza2k7 18:54, 27 February 2007 (CST)