Same clothes and everything. Wouldn't have noticed it until you mentioned it...bugger :P. Planeforger 03:22, 23 October 2006 (CDT)

I was wondering if we should post an in-game screenshot of her, in addition to the concept art. Here's a shot of her when she's still human. 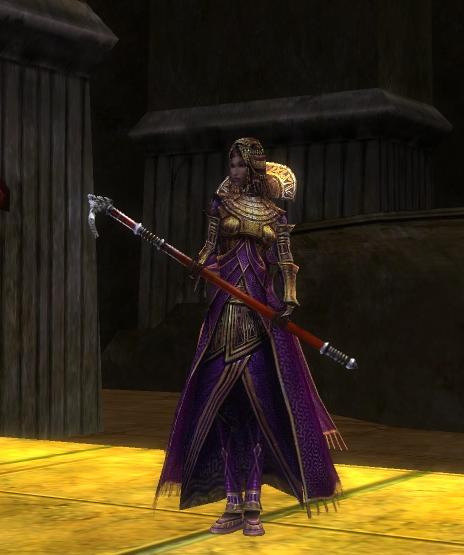 The human Varesh is level 20. The level 29 and 30 versions are the Prophet Varesh and Commander Varesh versions, which should get their own pages like the Lich Lord and Undead Prince Rurik. -- Gordon Ecker 22:05, 23 November 2006 (CST)

In my opinion, there should at least be a seperate Commander Varesh page. It would lessen the confusion on this page (and such confusion does exist) regarding species and profession. Again, similar to Undead Prince Rurik. Different levels, different models, different skills. --Valentein 07:08, 27 February 2007 (CST)
So what was the final decision on merging or not merging Prophet Varesh / Commander Varesh pages? They still exist but this page doesn't link to them, it seems. -- Glenn Gladewarden 00:20, 12 March 2007 (CDT)

so just cus she uses a spear we think she has a paragon as a secondery dose she use any paragon skills to show us shes a secondery paragon?

The character model, the scythe and the fact that the manual repeatedly states that she is a dervish. --Santaxlolwut? 09:49, 18 March 2007 (CDT)

Just cant connect to that external link on the bottom of page. If it is broken, should it be repaired or deleted? Dont know how to report them or how to solve this.Zeratul 09:50, 19 March 2007 (CDT)

To the anonymous user who made the changes to this page not too long ago: Turai Ossa was male.

I talked to someone claiming that she drops a green called "Vareshs Skepsis" in German (something like Varesh's Scepticism in English), which should be a "perfect spear" and have been dropped only twice, yet. Can anyone confirm something like this? --

One thing i did notice is that Varesh is seen with a few different scythes in-game. The picture above shows a scythe that i haven't seen before. She is most often seen with a Suntouched Scythe, though. The Varesh Minipet does feature her wielding this specific scythe. --Pyro05x 19:47, 10 June 2007 (CDT)

i think it should also be noted that there's a "intermediary stage" of varesh between human and margonite. if you don't know what i mean look at this picture (especially her head): 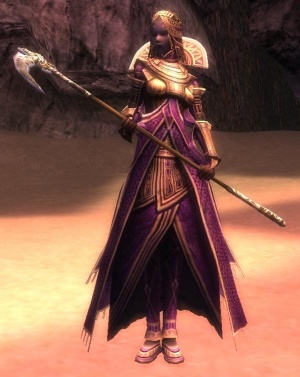 How old is she?[edit source]

Re this edit, Items dropped are listed on the Commander Varesh or Prophet Varesh pages, not here. That said, Margonite Robes are not a common drop - list them! --◄mendel► 00:11, 18 August 2008 (UTC)