When you meet him in Pre-Searing he's listed as "Verata the Necromancer" much like all the profession trainers are listed as "<name> the <profession>" --Rainith 12:59, 28 Sep 2005 (EST)

I have encountered him, but he doesn't always spawn, especially if Galrath does spawn. He's just like any other boss, he doesn't spawn there 100% of the time. That said, here is a link. And note the picture in this post.
Finally, you do meet Verata in Traveller's Vale, but he's green, you don't get to fight him, and thus you can't capture anything from him. Much like the cowardly dwarf in the Heart of Ice quest. That said, I should really read an FAQ on this wiki thing, I'm sure I trampled all over etiquette or something... --Euphemism

I thought as long as no one in the group has the Villany of Galrath quest, then he is gaurenteed to spawn. Like he's the default 100% chance spawn, but Galrath replaces him when the quest is active. No hard evidence though, 3 encounters out of 3 visits plus lack of challenge to this claim in one fan forum doesn't make it statistically significant d-: Maybe I'll visit the peak more often, but it's such a long fight to get there )-: -PanSola 14:27, 19 October 2005 (EST)

Ok look at this: 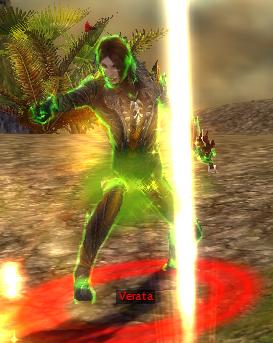 Aliens abducted him and Jarrel the Tamer during the searing, then they replaced them with these two imposters. :P --Rainith 19:30, 16 October 2005 (EST)

With these two as precedent, is it possible that Lina also changed her look and specialization (from healer to protector)? I mean, it's not all that hard to move attribute points around, and by the desert, any monk can easily pick up enough protection spells d-: Sorry for off-topicness d-: -PanSola 14:27, 19 October 2005 (EST)

I and a guild mate just were doing the galrath mish. My character never went farther than that, my partner has. It ended up being galrath and verata in the same area, verata being a little bit away from Galrath. There was probably 40 of his apprentices/sage/shepard/eyes with him. it was odd. I thought it couldn't happen that way. Anyone else have it happen?-----Moosemanunk 14:33PM

I have never seen him spawn with Galrath, even this past week I did the quest twice. There is always one of the Cult of Verata bosses there, but never him. --Karlos 15:05, 17 October 2006 (CDT)

I just tried the quest at Kessex Peak where I had Verata, Samira Dhulnarim and Galrath spawn together (quest was active). The hill was swarming with Verata's apprentices/sage/shepard/eyes. I was the only human player - my char was accompanied by 3 heroes and 4 henchmen. -- Looping 22:18 (GMT+1), 1 March 2007

I just saw him spawn with Galrath, got a screen if anyone needs proof. Now changing article

I searched for him all over Lakeside County and I could not find him. Can someone confirm he is there (for Secondary Necros). --Karlos 01:18, 18 October 2005 (EST)

He's only there if you're a primary necro. He is the initial skill trainer/quest giver guy that you get the first time you enter Lakeside County, like Van the Warrior for warriors. He leaves after you do the first quest where you have to kill a Skale. --Rainith 01:38, 18 October 2005 (EST)

minor things regarding to version[edit source]

And, what is their reasoning for not replacing the Claude look-a-like with the actual Verata model?

Unless I miss my guess, the post version of Verata is wearing a hairpiece. The widows peak visible on the pre screenshot is missing in the post, and he has a different hair color... I am rather inclined to say that he has gone bald and is hiding the fact with a wig. Yamagawa 05:38, 26 January 2011 (UTC)