FYI, tallies of foes killed for vanqishing title can be found in the Vanquisher article. --Wolfie

Most annoying vanquish so far.[edit source]

After completely vanquishing Elona, Cantha and half of tyia, I have to say this area has been, by far, the most annoying and "non-fun". Touchers, knock-downs, traps, lack of bodies to make for a good MM team or wells team, kiting griffons and pop-ups every 5 feet make for a very depressing and lack luster area.--Old Man Of Ascalon

Agreed. I lost the sight of the last hydra and I am right now sitting here waiting for it to come around, for about 45 minutes now... :( Would be awesome if someone knew its patrol path. There were 3 hydras, I killed 2, and one finished my party off, and by the time I ressed and came back, it was long gone in god knows what direction... :( RoseOfKali

Indeed, I hated this place. It wasn't hard, I came via Crystal Overlook with an 8 hero/hench party, but it took FOREVER, and yes, I too ended up having to go around the map repeatedly looking for the last patrol. That's long in the past for me though. You'll look back on it as just another vanquish in the end. :) Arshay Duskbrow 09:44, 10 December 2007 (UTC)

Most of the pop-up buggers are in the northwest area, for what it's worth. Also, I found the only pair of hydras in the zone patrolling north to south in the eastern half of the zone which we'd been over about 4 times already. When killing them did not give credit, I nearly died. Found a sand drake patrolling north to south on the far west side of the zone, too. Hope the info helps someone save a few minutes...

I didn't find the area difficult but was completely annoyed (mostly with myself) when I realized that the location that I had first seen the necro hydra boss and his group in was not on the path that he patrols. After waiting in the northwestern area where I had first sighted him for a good 25 min I ended up finding him in the center east area but couldn't catch him as he ran along his patrol path. I was trilled when one of the Hydras got stuck on the teleporter near the northern portal to The Arid Sea and took them out there. This was the last group I needed and I did get credit for them... a total of 231 foes. Em Jae 19:53, 14 January 2009 (UTC)

For future vanquishers: here's where I found her, near the teleporter where other have found her too.Karya Foxstep 21:18, October 22, 2009 (UTC) 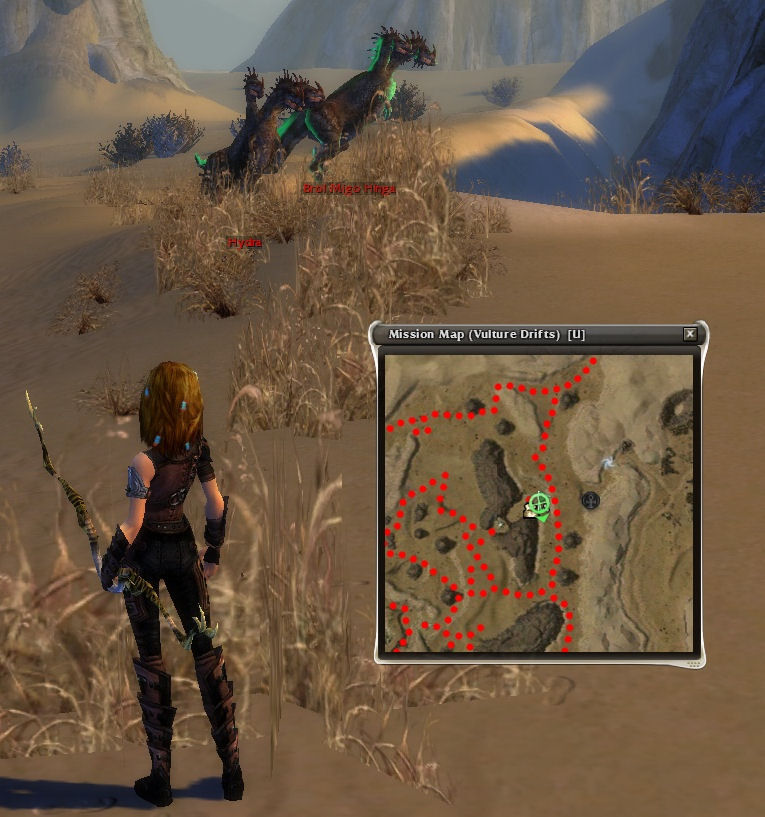