I guess it's useless this name because there are too much W/E than W/Mo. W/E are noobs and not W/Mo.

Mending is not for noobs but shock is i don't think only w/e are great everyone has his style don't you think?

I've also seen it spelled as "whammo" (possibly from "wham", e.g. the sound a noisily shut door makes), which reflects the common Wammo attitude of just using brute force and disregarding the party line. I've actually never seen it spelled "wammo", although either spelling makes sense. The point of the term is, however, not to denounce all W/Mo characters, but to describe the brain-dead players that are often find playing (male, white) W/Mo characters screwing up in every PUG and harrassing female characters in outposts and towns. While a n00b W/Mo is just an anal-retentive player who is immune to learning, the Wammo is also socially inept and disruptive in all other possible situations. 91.0.85.135 17:47, 25 December 2006 (CST)

I guess you're saying that all W/Mos are "anal-retentive players who are immune to learning", but I think that some W/Mo could be good players and some W/E could not. Think about this. Glenn 05:23, 6 January 2007 (CST)

Since it doesn't look like you actually read what he said, it was basically that this is a term for a certain type (perhaps stereotype) of W/Mo player. --Fyren 06:56, 6 January 2007 (CST)

See, here's how it works... Years and years of gaming tradition give us the warrior and paladin, right? The warrior and nuker are the most popular characters in almost every fantasy RPG. People starting the game will inevitably gravitate towards those archetypes, as they're already popular and familiar. In D&D and its direct derivatives (the majority of modern CRPGs), the warrior-type character is doing the fighting and relying on a healer to patch him up. In the majority of MMOGs, there is a "paladin" character who does the same thing but heals himself; oftentimes, this is the "tank" character. So, naturally, new players who pick a warrior very much tend towards Monk as a secondary profession, since it gives them that healing that they're so used to. However, GW/WoW don't just port old mechanics over to yet another MMOG, so much of the conventional wisdom gamers have from EQ or DAoC or NWN or Shadowbane or whatever just doesn't apply.

Specifically, what does a sword-swinger do in those games? He stands there and wales on things. There might be a fair bit of defensive resource-management going on with his HP, but his offense tends to just be a steady stream of damage. Maybe he has a few special attack effects that he uses, but those are just based on timers or limited uses. Now throw him into Guild Wars, where a warrior has to manage adrenaline and energy -- and use them for both offense and defense -- as well as just watch that HP counter. Already that's a very different resource model that he's got to adapt to. Or, if he doesn't adapt, he can shove a bunch of random attack skills onto his bar and more-or-less use them at random, treating adrenaline as just another timer rather than the micro-manageable and optimizable resource that it is, focus all of his defenses on simple healing, and do nothing about the plethora of negative status effects that render him completely ineffective. So, there he is, a warrior with terrible damage output and very limited self-healing (limited by his lack of Divine Favor, 2 pips of energy regen, low Healing Prayers score, and tendency to pick pretty crappy spells from that line -- I'm talking Orison and Breeze instead of Vigorous Spirit and Healing Hands, for example). Being useless because he doesn't yet understand the resource model of the game.

W/Mo is just another class combination; you can be good or absolutely suck with any class combination. Living up to the "wammo" stereotype specifically, however, is the quintessence of naive play. — 130.58 (talk) 18:46, 6 January 2007 (CST)

What do you call a mending assassin? An Assmo? and a Dervish? a Dammo? And a Ranger? a Rangmo? :P --Sigm@

Ur so wrong mate, Rammo doesnt exist. It is the R/E Flare Spammer. All they do is spam flare. Do you not remember from ascalon??? Dont be a wammo yourself and use the xD smiley properly. Og lo

Lol a wammo. Then what should people call a REAL nub, like touchers and E/D tanks ? But anyway, to use vigourus spirit (i know its spelled wrong), mending and HH is great for warrior tanking. I see really many use a sword or axe version with those skills in ab. At least this a non-nub tank way, like the E/D huh is for nubs with no skills, and have so many counters. I use a homemade warrior tank build, and (make it shorter^^) V. spirit + cyclone axe = LOTS of health in large groups. I use all these 3 monk skills, and it really works. So all those whiners calling the warrior tank a wammo, please spare your comments to the real nubs. YOU and toucher and E/D tanks. So even if you know will come up with a comment to me, where you tell me mending and all that blows lol. And how your build can take warrior tanks down easy. Ehmm yes ? all builds in gw have some skills or builds they can get killed by. So its just natural?. So these so called " Wammos " is just a non-official build, huh use Mending, HH and ?, players choice :). And like i said before, really many warriors use it, so to say something bad about em. You are also talking to a LOT of warriors huh use these skills, in pvp and pve.

You are so wrong it is funny. You sound like a person trying to defend your wammo against this... Oh well, I don't blame you, there are lots of wammos out there. BTW, another way of putting a wammo is a "Crippled Healer". Don't be dissin' peeps u can't kill. E/D tanks and touchers are simple to kill. Ever heard of interrupt, diversion, wild blow, enchantment removal? Well, maybe you should learn about it. A wammo is a W/Mo who brings skills such as mending, healing hands, healing breeze, and healing skills. Og lo

Well, noobody (or VERY few) brings those skills in PvP, and very few monster uses in PvE. And even if ppl use wild blow to cancel whirling defenses - Throw dirt !

I laughed so hard I almost choked! He actually answered to that! As if he had a point! What kind of PvP are you playing? RA?

I know that they aren't a good combo in PvP, but in PvE they're very good for farming and can tank efficiently. I know a lot of W/Mo don't tank right, but c'mon you gotta cut them some slack. I don't see people making fun of E/Me, I mean look how common they are! And most of the ones I've pugged with don't even have any energy management or arcane echo/echo. Wammo is just a horrible stereostype, and you guys that support it aren't helping out with the cause. 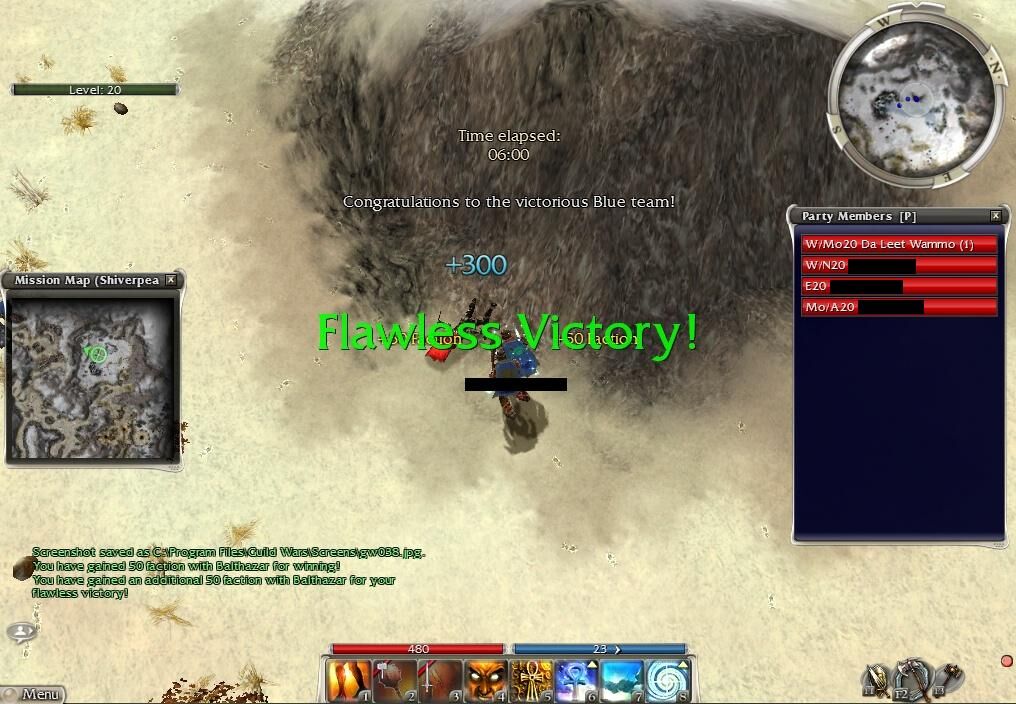 Of course it's a good job, it's almost impossible to flawless a RA game! I mean, who here has ever flawlessed a RA game before? On a more serious note, good job adding to the page, but a 'wammo' is different to a W/Mo, which you refer to several times. Tycn 02:51, 8 April 2007 (CDT)

Mmm, true, but I tried to show the difference. Before nightfall, wammos almost always referred to W/Mos, because W/Mos that weren't charging wammos were rare (one exception is the Holy Hammer build), and I made a note in the article that nowadays Wammos are no longer necessarily derrogatory depending on context, but that Wammos with mending etc are still a joke.

I agree with the title of this, many people who I've seen make fun of W/Mos have ones of their own, or their characters are all 60 AL casters who would die very quickly if their team didn't have W/Mos on the front lines sucking up damage and helping deal it too. I just call most people hippocrits because of what they say about W/Mos, because they'd all die without them. Phalmatticus 19:57, 21 April 2007 (CDT)Phalmatticus

I'm curious as to what your attributes were on that particular picture.... how exactly did you get max on all those attr to support your weapon swaps AND have enough in healing to make your healing prayers sufficient while also having some into tatics for your heal sig. Also your holding in your offhand what looks to be a mesmer chakram, in which you would not get the energy bonus, and at the same time you have the benefit of lower armor..... I believe that photo demonstrates Precisely why wammos are conceived as bad. Some (not all)wammos do not seem to understand the concept of attribute distribution, leading to ineffective/down right bad builds which is why this page exists.--Idiot 18:11, 4 May 2007 (CDT)

At first I thought, okay, so the sword alternate weapon doesn't need much in points, since it's just to cause bleeding with gash, then I had a look at the rest, hammer with crushing blow for deepwound but no kd to trigger it, and an axe for crippling. Not a build I'd support, lots of changing for a few conditions. Ezekiel 10:45, 10 June 2007 (CDT)

Who removed the link to the good ol' Paladin premade, in the "See Also" section? I think it needs to be here, because that build is also being joked about as a "wammo". It's also one of the reasons we used to see that many whammo's in RA. If no one will respond to this for a few days, I guess I'm just gonna add it in and see what happens.

Now tell me all this stupid things about armors and shiny objects or about other professions from what kind of intellgent user came from. I think that this page should be deleted ASAP because this site is supposed to HELP people, not to JUDICATE who (like me) likes a shiny armor or a shiny light for its visual effects. --:-) GlennThePaladin (Talk,Contrib) 06:59, 19 September 2007 (CDT)

When i saw Emo in related article i lol'ed