Talk:Wanted by the Shining Blade

it seems that bounty on this sign will be refreshed regulary. may be it should be usefull to put current quest to "Currently" section (just under today's zaishen quests) on a main page? —The preceding unsigned comment was added by T-pix (contribs) at 18:19, 22 May 2010 (UTC).

3 is what they say on GWW. —Dr Ishmael

They function like Zaishen quests - one quest available for 24 hours, then it switches to a new quest. —Dr Ishmael

Same as Zaishen quests. I thought I'd added that here, either I forgot or someone removed it. —Dr Ishmael

That's the entire reason we specify PST instead of just saying "Pacific": so we don't have to update all these articles twice a year. People should know the difference between PST and PDT, and if they don't, we're not going to coddle them. I'm also making sure that UTC gets listed first wherever we have a situation like this, because UTC is always the same. Finally, the link to the time zone map should settle any remaining confusion. —Dr Ishmael

For reference, here's a DPL-generated list of all the bounty articles and the parameters they pass to Template:SBquestInfo. (The list will automatically update as new quests are added.) Mostly I did this to see if there's a pattern to the rewards, and it looks like there are 4 tiers of War Supplies rewards, totaling 4, 10, 15, and 30. XP/gold is usually 1000/500 for Peacekeepers, although Selenas is only 250g for some reason. White Mantle have higher XP/gold rewards, not enough data to be sure if there's a pattern yet (possibly: Justiciars 3000/750, Inquisitors 5000/1000). —Dr Ishmael

After the reward rebalance update, it looks like all the quests fit into a 5-tier reward structure. The only exception is Lev the Condemned, who was up 3 days ago but I didn't have a chance to check the rewards in-game. Is there anyone out there who still has her in their quest log and can verify the rewards for her? Otherwise we'll have to wait another 3 weeks for her to come around again. —Dr Ishmael

So today's (29 June) Wanted Quest appears to be Wanted: Justiciar Kimii. Just thought I'd mention something since it didn't follow what was on the wiki.→ Qelsi710

Template indexing error. Thanks for the notice. —Dr Ishmael

I haven't done anything with the war in Kryta, yet, because of computer issues. But I was just wondering if the bounties will be rotated around again like Zaishen Bounties or not. Given the storyline, my guess is that the bounties WON'T be re-cycled into the list, but I've found nothing to confirm or negate that belief. Anyone find something that I'm missing? I just want to know if I'm permanently missing out on anything. :/ --91.18.18.127 22:10, June 4, 2010 (UTC)

Nobody knows for sure yet, but there was a bug that just got fixed that called these "zaishen quests," so there's a good chance they'll work the same way and repeat. RoseOfKali

Recall states "Spell failed. Spirits are not affected by this spell." Though, Swap doesn't work. Not very interesting or exciting facts, but I wanted to write them down anywhere. Kaede 12:36, June 6, 2010 (UTC)

Dismiss Condition casts successfully on the sign post but it doesn't get any divine favor healing.Slingshot John 23:21, June 29, 2010 (UTC)

I got insatiable Vakar today again.

Correct - the update states that the signpost was offering incorrect bounties. It's a logical assumption that it had been incorrect since the point where the cycle had seemingly reset, so there's no way we can be sure what quest should have been offered on those days. We'll have to wait for it to cycle around normally (if it does indeed cycle) to see what that part of the cycle was supposed to be. —Dr Ishmael

I did wonder if it was really worth doing for the low rewards. Guess we won't be getting any bonus supplies to make up though? Cyberhythm 20:50, June 9, 2010 (UTC)

Yesterday's correct quest was worth 22 supplies, the highest so far for daily bounties, and today's is 15. —Dr Ishmael

So today's (6/11) bounty is Vakar again, and it looks like we're restarting the cycle... again. Is it intentional this time? Or did they break it in yesterday's build and they'll rush out another one today? Will Evennia ever return from Ascalon, or is she doomed to be Adelbern's love-slave forever??? Tune in next week, same bat-time, same bat-channel! —Dr Ishmael

Do these quests continue if you complete the War in Kryta? It says in the notes for the last quest (defending Lion's Arch) that all areas return to Normal after you finish it. So I'm assuming that these quests are no longer accessible if you do finish the War in Kryta. But just wanted to ask if someone can confirm that? Nylana Greymoon 21:54, July 28, 2010 (UTC)

These quests are still available - the dialogue is changed to reflect that you are "re-living dramatic moments from the War in Kryta" or something like that. Having any of them active will set all Krytan areas back to WiK status. —Dr Ishmael 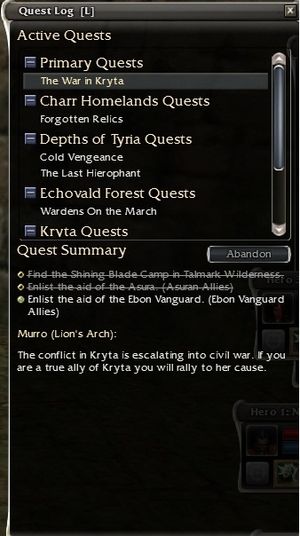 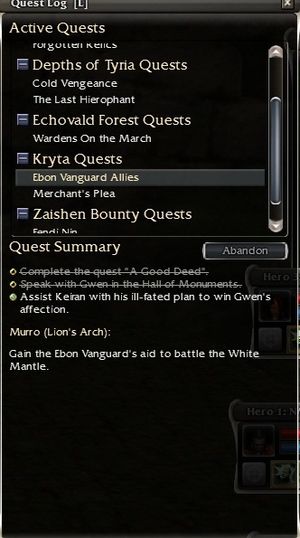 So, I can't seem to access them. I've tried going through this bad boy and to be honest, confuses the fudge out of me. As far as I've been able to figure out I've done the Trial of Zinn (did this first), then I got all the four dialogues from the Shining Blade camp in Talmark Wilderness (e.g. Grim Report etc) and I've done all the Gwen dialogues with Thackeray and have got him outside Eye of the North outpost to do the Scavenger hunt thing (<< do I need to do this before?). Can anyone give me a clue or tell me what I haven't done/am doing wrong? Much appreciated (: Foxy hood 13:37, 19 March 2011 (UTC)

Scav hunt is optional. As far as I can see, you've done what needs to be done. It could be you have to leave and rejoin the Keep once (the bounties appear when you re-enter the area after the dialogue there). If that doesn't help, I suggest going back to the Shining Blade camp. --Vipermagi 14:02, 19 March 2011 (UTC)

So the thing is, when I first entered the Keep I don't remember getting any dialogue from anyone, I've re-entered several times and been back to the camp in the wilderness twice, but have had no dialogue or extra people there saying/doing anything and now I'm not sure what to do =/ Foxy hood 16:40, 19 March 2011 (UTC)

Did you start the War before they updated some changes? Did you take the umbrella quest from Murro?

I find it far easier to talk to Murro and avoid all the "what did I do and when did I do it" nonsense. (One disadvantage is missing some dialogues, but those can be found on the wikis, so I don't feel I'm missing much. The other disadvantage is you can't drop the quests from your log... but then, if you follow the old school method, you still can't drop them because they don't even appear in your log.)

Clear as mud? If nothing above helps (or is too confusing), please take a snap of your quest log, for Primary and Kryta. Then also enter LA Keep and click on the Wanted sign and take a snap of that. That will give us a chance to figure out what else might be going on. Good luck.  — Tennessee Ernie Ford (TEF) 19:23, 19 March 2011 (UTC)

Right ok, so, talked to Murro (he hasn't told me anything other than the repeating what my quest log says (I'm gussing I did take the quest for him as it's in my log, I don't actually remember)) and looked at my quest log and I have two quests that it won't let me abandon, I've seen Livia recruit Zinn at the camp, and the other three dialogues at the camp, I don't have any bounties, and still nothing in the Keep. 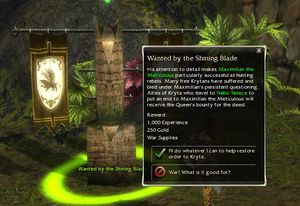 I'm so stuck! Are you sure I don't have to do the Scavenger hunt? Cause it's literally my only option... (and sorry for the retarded positions of the quest log pictures, it's not my strong point in wiki editing hah) Thanks for the help so far though (: Foxy hood 16:42, 20 March 2011 (UTC)

According to my memory, and the flowchart seems to agree, the Scavenger Hunt is mandatory. Valkor Dreamling 16:49, 20 March 2011 (UTC)

Wow, I forgot what a confusing quest chain this was. The scavanger hunt, in the flowchart - isn't required for the WIK chain up to battle for lions' arch - it only becomes mandatory if you want Gwen's unintended promotion dialogue. -- RandomTime 16:54, 20 March 2011 (UTC)

Ok, guys, I shall just crack on with the scav hunt... Umm... Anyone got any hard apple cider I can borrow? :P If it doesn't take me forever to complete I'll let you know how it goes and thank you for thumb nailing my pictures, I'll figure out how to do that one day. Foxy hood 17:42, 20 March 2011 (UTC)

Murro makes the quest chain a lot easier; but: that forces you to finish the Scavenger Hunt (you cannot finish recruiting the EV without it).

(Doing it manually is confusing b/c there are so many inter-dependencies and no clear route, save the flowchart, which is not entirely correct and/or misleading in minor areas. Taking the umbrella quest forces certain choices and eliminates the confusion, at the cost of flexibility — a price I'm willing to pay.)  — Tennessee Ernie Ford (TEF) 18:02, 20 March 2011 (UTC)