Is ne1 excited about another moa? I was hoping more for a tamable dolyak that does blunt damage. something different. and who wouldn't want a functional Yakkington? Bottle130 06:41, December 22, 2009 (UTC)

The White Jingle Moa is referred to as "..." at the Menagerie. And it's classified under Exotic, while the Jingle Bear is Tyrian. Pah, I expect a bugfix update later today. —Dr Ishmael

Though, personally I think exotic would be a fitting category for them both, considering they aren't exactly the normal fauna of the area. The ... might be a missing reference, or it might be intentional to not give out the identity of the new mystery pet right away. Kitsunebi 00:56, December 19, 2009 (UTC)

Eh? The other exotic pets are Black Widow (17) and Moss Spider (4), and neither of them are anywhere near the Jingle pets (21). (numbers refer to this) —Dr Ishmael

Well, I don't have the other exotics either, so I guess now we're trusting whoever wrote the table for that image. —Dr Ishmael

"Because of this, they will not turn hostile when you start charming them, meaning that you cannot death-level them."

The only pet that cannot be death-leveled in the Menagerie (or ever for that matter) is the Rainbow Phoenix. RoseOfKali

So, the note is misleading? More accurate would be

"As a result, they will not turn hostile in Gwen's Garden when you start charming them; to death-level this pet, you must release one into the menagerie and charm it there."

That's too suggestive. :P "They will not turn hostile while in Gwen's Garden, and thus cannot be death-leveled there." RoseOfKali

The White Jingle Moa was tamable by a char that had the Jingle Bear before. I did 3 of the GWEN quests, but not the last one. I guess the bird is tamable when you have made all quests in the past. To put it straight, if you had the right to claim the Jingle Bear last year, you have the right to get the bird too. It is NOT necessary to do the quests this year, if you have done them last year. I would like if somebody would check this. As I am not a regular member here, I will leave an addition to the main page to the "professionals". -- 84.175.64.236 22:29, December 22, 2009 (UTC)

Not true. I went to the garden on one of my chars who did the quests last year and the bear was there but not the moa. This happened every time I went to give the Norn his booze for the first quest. RoseOfKali

I was suspecting that. Was surprised to see that I could repeat it, even prepared a bug screenshot, and then was like wtf? :P RoseOfKali

Does anybody every really even taken notice when another player controls a rare put such as the White Jingle Moa or Jingle Bear? Fan Defy 23:10, December 22, 2009 (UTC)

After the introduction of the menagerie? No.--

Maybe I would if I actually saw players with pets in the first place. O_o RoseOfKali

So Naz, am I correct in saying that the introduction of the menagerie, at least as far as you are concerned, has made acquiring certain pets too easy? Just to clarify, I am not saying that your opinion is incorrect, I am just wanting to ensure that I am understanding you correctly. And Rose, would you say that having a pet would be more of a hinderance than anything? Fan Defy 18:44, December 25, 2009 (UTC)

No, I just don't see beastmaster rangers like ever anymore. RoseOfKali

I'd answer Yes to both questions. ---

I am taking my Jingle Bear with me whenever I go anywhere on my Ranger. On the other side, my ranger is bad and I don't play her at all :P

Yeah... they gave us major buffs for ritualists and paragons this summer, I think beast mastery is way overdue for some lovin'. —Dr Ishmael

Other than the Enraged Lunge and Comfort Animal buff? I'm a primary ranger and I still run as a sort of hybrid BM, with mostly bow attacks because I CBA to remember that Pet AI is ... odd. ComradeSanders 23:01, December 23, 2009 (UTC)

So? It's still not worth the skill spot on most non-beastmaster builds, and beastmasters are still rare. I remember joining pugs and seeing black widows and going "wow this is cool" but that was like 3 years ago. Hardly ever see pets anymore. Not never, but hardly ever. Though Pyre goes well with a hyena. :) RoseOfKali

Axes aren't worth it on most non-axe builds. I was just saying that BMs got a pretty good buff not too long ago, too, not saying they're worth it :P ---

Bad comparison. :P People used to take pets on all kinds of builds back when they used to leave a corpse. :P And well, axes are great for 55's. 8-) But oh well, Anet will have to do more to bring pets back into mainstream and make the menagerie actually useful in addition to pretty. RoseOfKali

Hammers aren't worth it on non-hammer builds. How's that? ;-)

If I didn't have so many cheat-skills to choose from and if Rangers had a rez skill, I might take pets out more often. Discordway and other MM-based teams also reduce the relative usefulness of beastmasters; 10 extra allies/MM? or 1 extra ally/hero-with-pet? If we are going back 3 years, then take away heroes and Beastmasters will return.   — Tennessee Ernie Ford (TEF) 18:18, December 24, 2009 (UTC)

Pets were still pretty popular when I started a little over two years ago, I started playing right as Factions came out. I agree that one big advantage to bringing pets back then was the exploitable corpses. I use to bring pets with every character if for no other reason that to give other players rolling an MM an extra corpse to exploit. It would be nice if Anet brought that back too. It seems to me that when me and my heroes all bring pets we end up wiping, pprobably because of the period of skill diablization...and I am probably revealing my ignorance there as well. But I am going to continue to bring my pets. I just rolled a ranger, had her tame a white jingle moa and had my koss tame a jingle bear...I am in somewhat of a festive mood this year surprisingly seeing as how I am currently dployed down-range. Fan Defy 18:44, December 25, 2009 (UTC)

In my experience beastmasters work well, and even worked well BEFORE the beast buffs of the summer, ONLY as full-on beastmasters. There's no point in being a hybrid, except maybe a bunny thumper. I've got a Jingle Moa on my female ele (yes, I know, I know, she's NOT a full-on beastmaster, but I'm talking normal mode here) and the jingle is, in my opinion the best looking (ice cool, literally) of the moas. In comparison the black moa looks scruffy IMHO. It appears to me to be bigger than the other moas, but I can't be sure of that, it just looks that way, maybe due to the colour. I'm levelling her - the jingle moa - for my menagerie, so that my proper BM can use one. Thalestis 01:08, January 25, 2010 (UTC)

(Reset indent) You know guys, I used a R/P hybrid beastmaster build in every Hard Mode mission and whenever I'm vanquishing. Just NRA makes it worth the skill slots.

Wynn Only after Level 20[edit source] 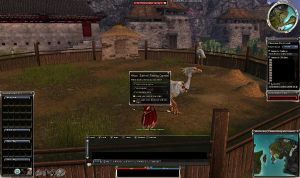 Sorry for the size

I don't get it, what's the point of this? RoseOfKali

the Article used to say "White Jingle Moas cannot be retrieved from Wynn in your Zaishen Menagerie Grounds even after being registered with Emryd. " This image is proof that they are available after a level 20 one is registered to the menagerie, from Wynn.

Why does no one ever thumbnail images like this? It fixes everything.
And I think whoever originally added the note to the article didn't realize that Wynn won't "summon" level 5 pets. You have to unlock at least one of the level 12 tiers in order for her to summon them. I'm going to remove the note here and on Jingle Bear because that's just the general mechanics of the menagerie. —Dr Ishmael

Thank you for clarifying my WTF? ^_^; RoseOfKali

Can somebody elaborate some more on which evolutions do what kind of damage please? Princess Pondwater 19:52, December 25, 2009 (UTC)

Yeah, so I finally got myself into the game and got my bird, but I found something interesting when I went to the Menagerie. When I attacked the level 5 Jingle Moa out in the mountain area (and Jingle Bear next door, for that matter), they would turn "hostile", but not attack. I had a pet at the time, so I suppose that could have caused it. Anyway, someone who actually knows about Menagerie stuff should probably look into this.

Yep, that's what happens in the Menagerie. Check out Guide to evolving a pet for how to do it there. —Dr Ishmael

That guide says that attacking a creature should also aggro it. I'll check some more things to see if it makes a difference, but either the entire Menagerie is bugged somehow or those two creatures act abnormally.

Ok, I get it. Evidently, the pets don't attack you, but still get XP from you repeatedly dying? Quite different from the death-leveling I'm used to.