Profession Warrior? I seem to recall that I saw him using the same skills as the Red Yetis before he switched status from foe to NPC. That would make him a Necromancer. Can anyone confirm? --Tetris L

No Exclamation Mark? I don't see an exclamation mark above his head, indication he has a quest to offer. Neither do I get the indicator to get the reward. Anyone else haing this also? (Screenshot shown) 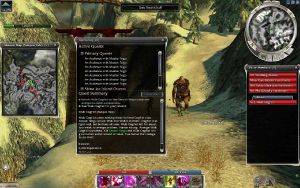 It appears kind of half-inside his body
—

Its the same thing if you talk to Palawa Joko in NightFall Campaign, it appears as its in hes head. (Im only a guy that play Guild Wars and have seen much, i want to be a user but i dont know how to do O_O )