Stances such as Bonetti's, and such skills as Riposte and Deadly Riposte do not trigger Zealot's fire.

However, the article states that stances such as Bonetti's Defense trigger it. This needs to be verified. — Stabber 04:12, 16 March 2006 (CST) 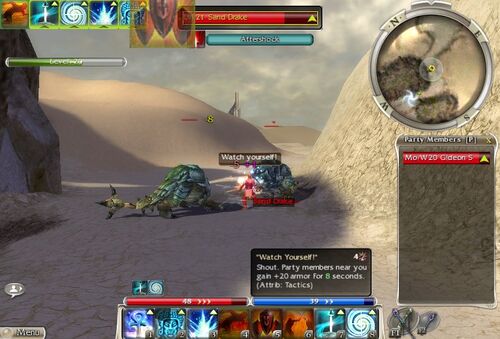 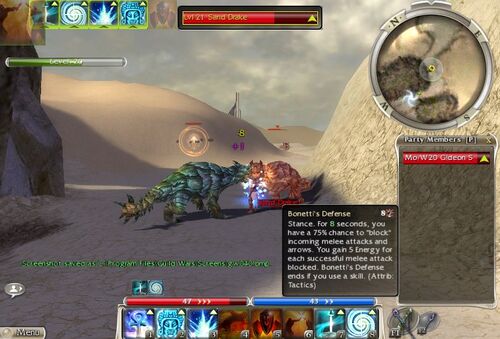 As you can see, "Watch Yourself!" and Bonetti's Defense do not trigger Zealot's Fire. Would have shown Rush too, but I keep getting an upload error. Myth Busted. --Gares Redstorm 05:51, 16 March 2006 (CST)

That 'myth' used to be true. I used to take "Watch Yourself!" and any other spammable warrior skills so that I could spam the Zealot's effect but this was all fixed a long, long time ago. Almost any skill would trigger Zealot's back then. --Qian Khan 18:18, 4 May 2006 (CDT)

The trainer Sorim in Quarrel Falls sells this skill.

Nope, he doesn't. You may have unlocked this skill already in your account, in which case all trainers, even the one in Ascalon City, will sell this skill. F G 14:06, 4 April 2006 (CDT)

do we mention the temporary increase of length?

Come to think of it, given how often you spam Healing Breeze, Protective Spirit or Spirit Bond when you 55 or SB/PS Tank, I'd recommend including this as a mainstay enchant on your spellbar if you have space for it. --Infusco 02:37, 29 July 2006 (CDT)

I've noticed that recasting Zealot's Fire while it's still active doesn't cause a burst of fire damage. Does it not trigger on itself? Incarnadine 07:23, 29 July 2006 (CDT)

I can't make Blessed Signet trigger Zealot's Fire. Is it because it is a signet or because it automaticaly targets me? namnatulco 10:42, 2 August 2006 (CDT)

They nerfed the Zaishen![edit source]

That was the smiters offense preety much!

Seems like a pretty crappy excuse for offense to me... note powerful but conditional skills (Spear of Light, Smite)... oh WAIT, of COURSE no one will use those, YOU CAN'T HEAL WITH THEM! Every skill except this, Balthazar's Spirit and maybe Signet of Mystic Wrath need a major buff, by far most underused attribute in game --Gimmethegepgun 19:26, 14 December 2006 (CST)

There's a good way to use this skill. Even on a normal Dervish this skill can work wonders, as lots of Dervish skills are self targetted enchants.--Rickyvantof 10:56, 28 March 2007 (CDT)

I tried this with Dervish enchants (see above) and apparently it didn't trigger. Then I read what was stated above, that self enchants aren't targetted. But for some reason skills that say "target ally" can also be cast on yourself, meaning you are an ally (of yourself? ;/) so I'm wondering why self enchants aren't considered to be "on an ally". It stinks though, because the build I came up with doesn't seem to work...:(--Rickyvantof 14:00, 30 March 2007 (CDT)

ANet changed it long ago mainly because divine boon (which had no recharge then) and shouts would trigger ZF, allowing farmers to spam skills very quickly. --Fyren 15:03, 30 March 2007 (CDT)

Heal Party doesn't target any particular ally, but if I remember correctly the caster will receive the Divine Favor bonus. So, I think you lose only 1 energy.

Losing 8 energy would be awesome though, because that means you would trigger ZF 8 times as well. ZF Spike anyone? :D

That would require all party members to be adjacent to the same target, which makes them Wounding Strike fodder. And more importantly, it doesn't work that way anyway.

You can spike with ZF. 7 Monks, each 3 shouts and a Smite Hex / Condition, ZF. One Monk has a Shadowstep and some form of DW. Shadowstep Monk steps to a target, 7 other monks cast their shouts and the Smite skill. Boom. 7*4*ZF damage + DW + possibly Smite damage. ---

also what is this? "Damage from Zealot's Fire does not ignore armor" Cmon people, it clearly says Fire damage, since when can that be armor ignoring? Fleshcrawler Soban 22:35, December 5, 2009 (UTC)

Yeah. Besides, it's the ONLY Smiting skill that DOESN'T ignore armor (unless you count Judge's Insight... kinda), so it's abnormal enough where someone might not notice it --Gimmethegepgun 10:25, December 6, 2009 (UTC)

Huh, well. This significance should be duly noted by whoever adds the note back, then. —Dr Ishmael