The story behind Zho's eyepatch: 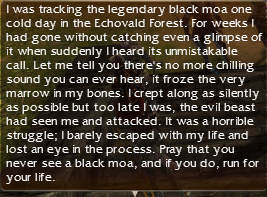 I edited out the note where it says that Zho's Canthan armor is dyed green, as this is misleading. Dying Canthan Ranger armor green will only dye certain parts of the armor and will not get the same look as Zho's. The art for her Canthan armor is unique. --aCynicalPie 02:32, 6 June 2006 (CDT)

Replace Disrupting Shot with Distracting Shot and have her maintain Read the Wind instead of spending the first few seconds of every encounter setting it and she'd be ok. Penetrating Attack can stay to keep her inferior to heroes/humans. As she is, bleh. --24.179.151.252 21:47, 28 August 2007 (CDT)

Zho is meh. Penetrating Attack is a waste of energy; good interrupt reflexes but I've yet to find any areas in EotN where Zho is extremely useful. Lots of EotN spellcaster mobs, you can't just shut down one of them (ie. Chromatic Drake) for the win. It's fine against Monk monsters, like Berserking Aurochs. Still...meh. I think Aidan is better overall, since you can count on him for constant AoE attacks and self-defense through Whirling Defense. Giving him Splinter Weapon is pretty awesome too.

Epidemic ftw? I just end up using Margrid using a souped up template of Zho that I made ages ago. Besides, Aidan gets the shaft for having BOTH Barrage and Volley (the hell is the point of having both?). At least he's got Debilitating Shot, but no interrupts FTL. --Kale Ironfist 20:45, 3 September 2007 (CDT)

Epidemic requires one to have /Me secondary, not always viable. Adjacent range FTL, and Hero AI for using Epidemic is awful. If I wanted a BHA Ranger, I'd play it myself, or use my own Hero. Although, if you give them Concussion Shot that works even better. For Aidan...well, under an IAS, he would need both Volley and Barrage to keep up constant AoE and no skill recharge downtime. Same if he used a Shortbow. So there is a fragment of usefulness. No interrupts on Aidan I don't mind, give him Wailing Weapon or Warmonger's Weapon or Great Dwarf Weapon, it's pretty radical.

Forcing a Ranger hero to have Mesmer secondary isn't too bad, and adjacent isn't too much of a problem, since monsters tend to stay within Nearby (requiring 2-4 Epidemics to spread everything around, but it's worth it in most cases). Concussion Shot isn't generally worth it against bosses or Hard Mode, and in some cases isn't practical. I'd use it if I could guarantee the AI would hit in those cases (not always possible). Aidan has no IAS, so there's no need to have both, and I'm pretty sure he uses a Longbow or similar (so the recharge isn't too bad). I don't use ritualist heroes, since their AI tends to be over the place, and I'm a Warrior most of the time, and with no GW:EN rit henchmen, there won't be weapon spells for anyone in my party. --Kale Ironfist 20:59, 3 September 2007 (CDT)

Like I said, Hero AI for using Epidemic is abominable. Trust me, I've tried many times. Concussion Shot is worth it, if BHA is worth it - saves your Elite, energy is easily regained with Prepared Shot or something, faster recharge, Hero reflexes is pretty much a guaranteed hit...Aidan has an Ivory Bow that seems to act like a Longbow, no one has ever really been able to determine which it is. You can put an IAS on him through things like Volfen Bloodlust (ownage). I usually have R/Rt and Razah or Xandra as Channeling-specced Rits, so Weapon Spells are no problem. (Splinter Barrage ftw)

I've found it to be not so bad, but that's probably because my team is generally condition overload (weakness, blind, daze, bleeding, cripple, deep wound), and though I've only got Margrid using Epidemic, the number of debilitating conditions spread is huge, enough to counter their poor targeting. Low recharge also helps. --Kale Ironfist 21:19, 3 September 2007 (CDT)

I tried doing a R/Me on Jin, who was running the staple Burning Arrow build, and stuck Epidemic in for one of the Filler skills. Failed miserably...any time ANYone applied ANY condition to her target, she used Epidemic immediately. So, my Weakness from Enfeeble (for example) made it a waste. You use massive condition overload so a mis-target isn't a huge problem, but since I almost always have my other two Heroes as Monks, I obviously can't do that >.>

That's kind of how I built my team around, knowing that she'd use Epidemic as soon as the target had a condition (even if there was no one around X_X). Plus, there's also the fact that I trust hench monks. I try to kill things faster than their energy runs out, so I can fill up my hero slots with something more useful (hench skill bars tend to favour defense over offense, so my heroes are offense support or counter-support).

(resetting indent)Mend Ailment isn't too bad, the hench that do have it also have Draw (although their AI sucks at waiting until everyone else is clean before using Mend, plus the healers start using BL to clean up and wasting energy). Rebirth isn't too problematic, since we've got hero/hench flags. Healing Breeze and Heal Other/Jamei's Gaze? I hate them so much... Sooo~~ much. --Kale Ironfist 21:55, 3 September 2007 (CDT)

I would like to see the attribute points for this char- it would help.

I'd like to know what the maximum range of each ranger hench's bow is. This one in particular, since BHA is useful against spellcaster bosses relative to other henchie elites. In other words, does Zho's bow have the range of a flatbow, a shortbow, or somewhere in between? And does it have max damage?--War Pig5 01:13, 9 February 2008 (UTC)

Of course it has max damage. I highly doubt Shortbow, and I don't think it's Flatbow either, so I'd guess Longbow --Gimmethegepgun 01:17, 9 February 2008 (UTC)

She seems to use a flatbow (i though about a flatbow, but some seems to disagree with it), due to the long range and very long flight time of the arrow (specially when casting broad head arrow which X3 the flight time)--Erei 17:33, 28 April 2008 (UTC)

Needs a PROS/CONS or EVALUATION section on the article page! Would someone knowledgeable please write it up? Especially for the GWEN skill set.

In Factions, don't take Zho, she has a crappy skillset.
In Eye of the North, I'd take Zho always, because she has good survivability, BHA is gud, and she can interrupt. Attack skills make her waste energy, but whatever.

I submitted her new build for the PvP tournament, and Anet used it! How do I know? I remember all 3 builds I submitted down to the last skill. I put Zho's build together in less than 5 minutes, hoping for a win. Guess what? I got it. She's usin' my build!