So this is proof that FoW and UW are core right? Or is it possible that a Factions-only account wouldn't be able to get in from here even if the character is ascended? -PanSola 16:00, 3 May 2006 (CDT)

Forgive my ignorace, as I haven't played overly much of the Factions stuff, but how does a Factions only character ascend if that is done in the Crystal Desert? Or is there ascention in Factions also? --Rainith 16:04, 3 May 2006 (CDT) 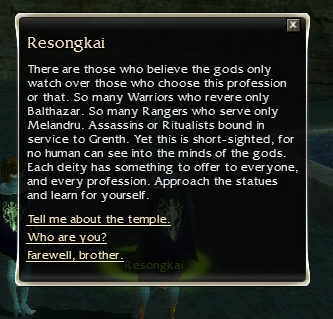 According to Resongkai Assassins pray to Grenth too, as the screenshot above show. --Jamie

On release they changed assassins to follow lyssa — Skuld

Which I know, but they didn't change Resongkai's text... --Jamie

And that is a very recent screenshot I uploaded it the morning after the time it was taken. --Jamie

i keep looking everywhere in here but i cant seem 2 find hte 5 god statues. are they in the actual outpost?

Next to the exit to Tahnaki Temple there is another gate, if your region does not have favor you cant go through it but if it does then the gate will be open and statues are inside. --Alari 00:33, 17 January 2008 (UTC)

ah i see it now, this

I had problems finding the statues as well when I first came here, it's designed very badly, the ToA is still the best imho. Nice small without having a long walk to reach anywhere Blue.rellik 05:16, 17 January 2008 (UTC)