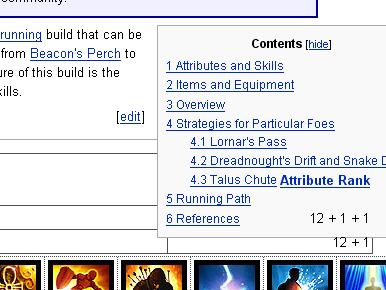 Hehe. However I moved the template to TOCright as it is only pages with that and attributes whichcause problems Skuld

I think this should be fixed by tweaking TOCright. This is leaving huge ugly white space everywhere. Buy a bigger screen, mate. F G 04:18, 7 May 2006 (CDT)

Is it because of that? ParserFunctions --

I knoestly don't see why it does it. It was working for a short time before. I have no clue why it suddenly stopped when I removed all the white space! --

This doesn't make a lick of sense. We are using the HTML format for rows and colomns. Your Templating trick seemed to work. I was about to see if putting nowiki tags around the assignment tags would help. I think I've cause enough damage for one day....I am so sorry I touched it.--

It's okay, even if I seem to be yelling at you a lot. You can't really do permanent damage to a wiki. The problem with your original version was whitespace, but knowing where it's needed and where it's not (and where it breaks things) can be difficult to understand. My comment on your talk page wasn't that all whitespace is bad, just that it can be, so don't throw it around without testing first. I figured since I was mostly rewriting this anyway, I should switch it to wiki syntax from HTML and factor out the switches to other templates that might be useful elsewhere. --Fyren 20:05, 9 September 2006 (CDT)