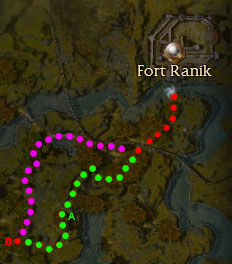 The route to The Bear Hunters.

The Bear Hunters are a band of 5 drunken hunters standing in a wooded area Southwest of Fort Ranik before The Searing. Their names are Benton, Senssa, Bruse, Neihl, and Dannel. Benton is extremely drunk, and will only say "*hic*" if you try to talk to him. Talking to any of the others starts a quest to slay a bear within 3 minutes.

Starting out of Fort Ranik, head Southwest. The purple route is easiest to follow: take the path from the Fort, then take the fork right. Follow this path until you pass the pond on your left, then head South to Point B (the Hunters). The downside to this route is that you must fight half a dozen Skale Broodcallers and a few Giant Needle Spiders along the way.

The green route is slightly harder to follow, but much nicer when you get used to it because you only run into 2 or 3 enemies. To go this way, take the left route when the path forks, towards the small circle of stones. Directly West is a hill with a slope you can walk up. It switches back, then comes to a fork (point A). At this point there is a crest, making it easy to miss the way down. Just stay left over the crest and there will be a slope down the hill. When you are at the bottom, head West-Northwest to the Hunters. You may aggro a bear; avoid killing it by running away to the hunters. If you don't lose it, you may try to run around some more (avoiding the trees as there are plenty of Giant Needle Spiders waiting in them) or bear the brunt of the attacks and heal.

Note that this "quest" will not generate an entry to your Quest Log and also not show any objective locations (i.e. where to find a bear) on your map. This quest can be repeated as many times as you like, and can generate a large stash of Hunter's Ale.

The hunters will ramble for a short while bragging about their hunting feats. As soon as they finish, a timer will appear in the top center of your screen counting down from 3 minutes. To speed things up, you may head for a bear as soon as you have started the quest, but avoid killing it until the timer has started.

When you have slain a bear, return to the hunters and talk to one to receive a Hunter's Ale. Before you may start the quest again, you will have to wait. The only thing they will say for about a minute after you receive the Ale is "Drink!"

One says: Pass the mug...
The rest chime in: And string your bows!

One says: Someone poke Benton, I think he might be dead.
All: Naaah.

One hunter: Did you hear that?
Another: What?
First hunter: Sounded like a bear!
Second hunter: Just be quiet, it will go away.

This is a simple number substitution game where

For any number containing one of these digits, substitute the corresponding word. For example:

When there are two (or more) digits that are substituted with words, both words must be used. For example:

This game is fairly simple and probably shouldn't be played while sober, or else it could take forever!