The Cipher of Balthazar 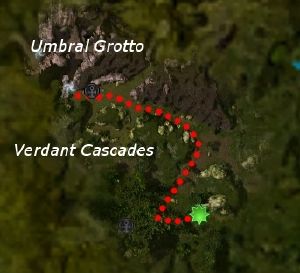 "To the Asura, there are no gods. There is only the Eternal Alchemy. It is the greater scheme of existence of which we are all a part. Your gods are pieces within this design, their manifestations mere facets in the geometric whole.

There is more to be learned, more facets to uncover. There are yet signatures I do not possess. Take the Divination with you. The Facet of Destruction, a manifestation of Balthazar's power, has appeared in the Verdant Cascades. Destroy it, and return its cipher to me."

Accept: "Your manifestation is my destiny."
Reject: "Do you really need ALL of the ciphers?"
When asked about quest: "The Facet of Destruction has manifested in the Verdant Cascades. The Divination can guide you to it."

"The wavelength patterns here are clearly different from the first cipher. But what does it mean? Perhaps the answer lies in that which is alike, or that which is different. I require more ciphers before it will become clear. There is more for you to do, <name>. But for now, take this compensation."

The location the Divination leads you to is different each time you zone into Verdant Cascades. The proximity indicator will fill to indicate you are on the right track, initially blue and turns red as you get even closer. Once it fills completely, the Facet of Destruction appears.

Exit and re-enter Umbral Grotto until your indicator shows a little blue progress in the bar (see top of map). Then head south-east (see map). On the way you've got to fight several Quetzal mobs.

See talk page for discussion of the possible spawn points.